The following is the first chapter of my second Martha’s Vineyard Mystery novel entitled Deadly Catch! It is the follow-up to The JAWSfest Murders and the predecessor of White Shark, Pretty Vineyard Girls and Dead And Buried. I really hope you enjoy it! If you have already read this book and enjoyed it, please leave a positive comment in the field below. I’d love to hear from you.

Charles’ face exploded through the water to find the hot July sun waiting for him. It did not take long for the coolness of the ocean to drip away and the warmth of the mid-summer rays to heat his skin. He couldn’t have asked for a more beautiful day. July on Martha’s Vineyard was full of flawless days. One hundred and twenty five thousand annual tourists could attest to that. Charles looked back over his shoulder at the now familiar Fuller Street Beach. There were quite a few families on it today. In the past, Charles had swum in the early morning and the beach had been quiet but today he was swimming at peak time and he had a lot of company. Swimming parallel to the beach, he did the breaststroke for a while before breaking into a full front crawl. 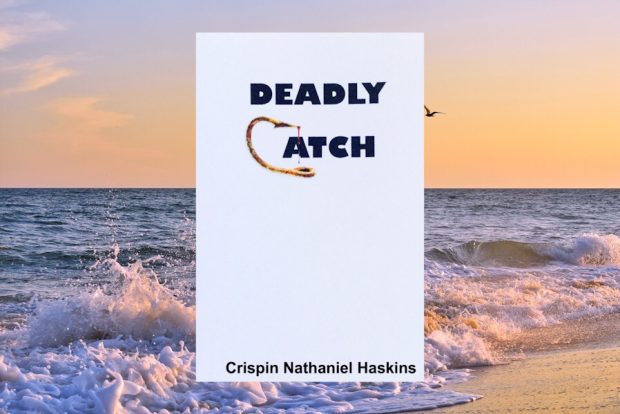 The man thrashed desperately to stay afloat, just to keep his head above water. Without hands and feet, his severed limbs flailed but made little difference. The more he splashed, the more he bled. The water around him was deepening from pink to dark crimson. His arms stretched out but ended in bloody, severed stumps. He could gain no advantage over the water. He was sinking. He couldn’t even flip onto his back. On his back, he might be able to calm down- float and breathe. He swallowed water. His blood made the taste metallic.

Charles floated leisurely on the ocean. The salt of the Atlantic carried him around like a king. How had he gone a whole year away from this place? It was so good to be back. Toronto was a fantastic city and definitely his home but there was something special here. Something rejuvenating. As soon as he stepped off the ferry that morning, he had felt it. It had been good to see Laurie again. Police Chief Laurie Knickles. They had kept in very close contact all year. There had even been some brief talk about her coming up from Edgartown to spend Christmas with Charles and his family but it hadn’t panned out. No matter. He was here now and it was great to see her. She had tried to insist that he stay with her but he was emphatic about staying at The Edgartown Inn on North Water Street. They almost had quite a fight about it, now that he gave it some thought. He was such a private person. He really liked his space.

Charles straightened up from floating and started swimming back toward his towel. He swam in the direction of the Edgartown Lighthouse. Chappaquiddick crested the horizon behind it.

The man went under. His lungs burned with a desperate plea for oxygen. A kick with a footless leg got him up quickly but briefly. He inhaled. There were black spots floating in his eyes. He hoped that he would bleed out before he drowned. He went under again. He was blind under water. There was too much blood. His limbs were numb. They slowed. His lungs gave up what little air they had and he gagged. Wretched. He could feel himself sinking. Blackness. No sound. It was so quiet. His blood swathed and warmed him like a sleeping bag as the life left his body.

***
Charles swam back to shore. Making his way onto the beach, his body glistened in the warm, yellow sun. He was in no hurry as he walked toward his knapsack and his towel. Families flew big red kites around the lighthouse and young couples lay reading on the sand. He couldn’t stop smiling. He loved seeing happy people. Charles was so glad to be back on Martha’s Vineyard.