Craig waded out of the water with long purposeful strides. His core was strong and his legs well-muscled. They had to be to hold their own against the ocean current. When Craig went fishing, more often than not, he ended up standing in water more than waist deep. Today was one of those days. 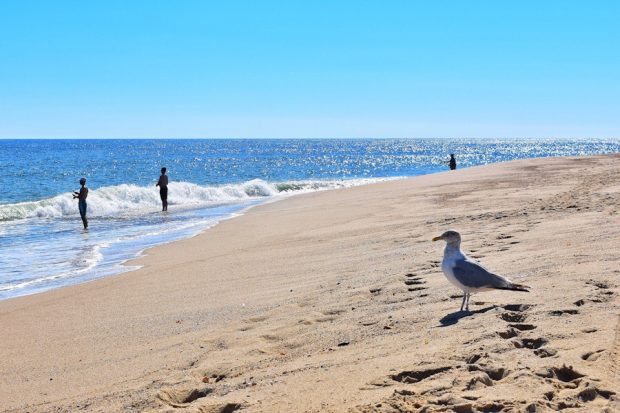 His day had started on Wasque, the south-east point of Chappaquiddick, which was, in itself, the south east point of Martha’s Vineyard. Wasque was usually a great spot for fishing but today, he had come up empty-handed. The other fishermen competing in the Martha’s Vineyard Striped Bass and Bluefish Derby weren’t faring any better on the Point either, but they were sticking it out. Craig left them there. Fed up, he had decided to make his way to Aquinnah. It had been a good idea too. He had already caught a decent sized bluefish and now, he was wading in with a false albacore.

Craig opened his cooler and lay the false albie in with the blue then, out of reflex, wiped his hand on the bib of his waders. Looking down at the fish oils on his waders, he laughed. “What was the point of that?” he thought. The rubber pants would be covered in fish blood and oils except for the fact that they kept rinsing away in the ocean. He was looking forward to eating the blue, but the false albie wasn’t a great eating fish. They’re a really bloody fish. A lot of dark meat needs to be cut away and the meat that was left over didn’t have a lot of flavour and could be pretty mushy. They weren’t his thing at all. The blue though—delicious. Eating or no eating, the most important things was that Craig was now halfway to his derby grand slam.

Craig turned around and looked out over the ocean. The sun was going down. The sky was orange and yellow. The sea was liquid gold. The sunsets at this end of the island were spectacular. Deciding that there was no better place than in the ocean to watch the sun go down, Craig waded back out into the surf with the hopes of catching just one more fish before the day was out. 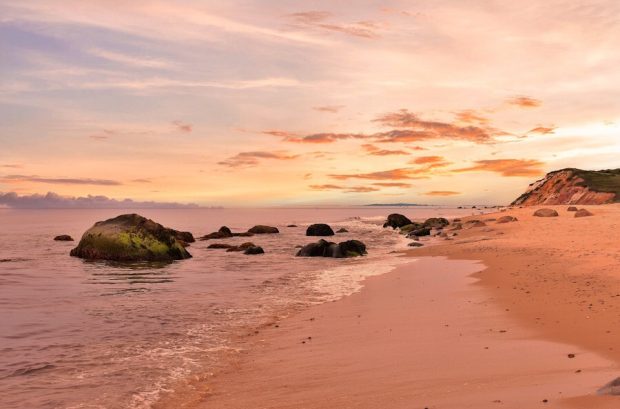 Aquinnah Sunset on The Beach

Craig cast his line and there was a soft whiz sound as the lure flew out in front of him. It was a good cast. The lure hit the water far enough away that Craig neither heard it nor saw it go in. He couldn’t see a whole lot in front of him with the sun setting directly in his line of vision. He did see a large flicker of black, but it was gone. Probably a rock now lost in an incoming wave. Craig slowly began to reel in his line. There was a pull. A tug. It felt like another bluefish. Fantastic! It ran and Craig pulled it in a bit more, then let it run again. His line was taught. Craig dug his feet into the sand. He felt his stomach tighten and his back brace. Craig leaned into the line and then pulled back. The fish fought him. It was always amazing to  Craig that lines didn’t snap. He loved this dance, this undersea ‘cat and mouse’. Craig gave a strong pull and the fish lurched, briefly breaking the surface, before going under again. The tension on the line was constant. Craig saw that same flicker of black. Was it a rock? The waves and setting sun were playing with his eyes. It looked like it was moving.

The line went lax. Immediately. The tension was gone. Craig stumbled backward but the waves stopped him from losing his footing completely. He reeled in his line as it started rolling toward him in the surf. The lure was gone. Craig stood looking out across the ocean. The froth of seawater and fish blood bubbled around his chest. He started to back up…slowly. Craig wanted to move and move fast, but instinct wouldn’t let him. He wasn’t alone. 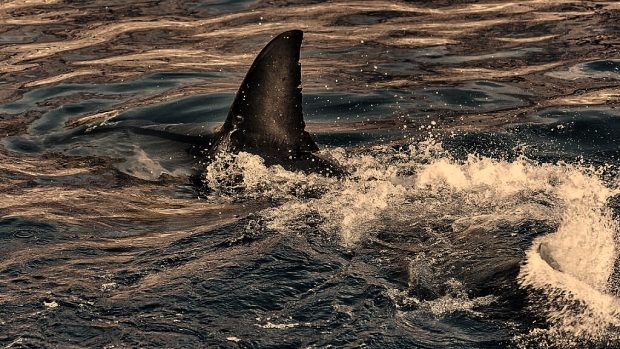 The large dorsal fin broke the water fifty feet out from Craig. The fading sunlight cast a red glow across its smooth black skin. With a thrust of unnatural power, the tail fin broke the surface and steered the great white toward him. Craig dropped his fishing rod and lunged toward the beach. Why had he wandered so far from shore? He drove his legs against the force of the ocean, but as each wave washed back out to sea, Craig felt like he was going out with it. Was he actually moving backward? He wanted to turn around. He wanted to see where the shark was. How fast was it going? But he knew that would only be foolish. Move forward, faster.

The force of the fish hit Craig square in the back like a tank. It propelled him forward through the water until the pressure on his chest was so great, he almost broke a rib. He landed face down, getting a mouthful of water. The force had knocked the wind out of him. Instinct told him to inhale—all he got was sea water. Craig coughed and gagged. His head broke the surface and he wretched, then vomited. Craig came back down, only to find that he was in a foot of water. He began to crawl. His limbs shook underneath him. Craig wretched again trying to find his breath. The last wave rolled away and Craig was on the beach. He knew he couldn’t lie down or he would choke. Craig sat up in the dim light and looked out toward the sea. The purple and blue waves rolled in and out. Craig started to breathe easier.