In my first post about the lighthouses of Martha’s Vineyard, I started to write about each lighthouse in chronological order. The first lamp to be lit was in the Gay Head Lighthouse on November 18th, 1799. It was followed by the Cape Poge Lighthouse which was lit in December of 1801. After a brief period, The West Chop Lighthouse, known then as The Holmes Hole Lighthouse, went into service on October 5th, 1817. The Edgartown Lighthouse came next and was lit on October 15th, 1828. 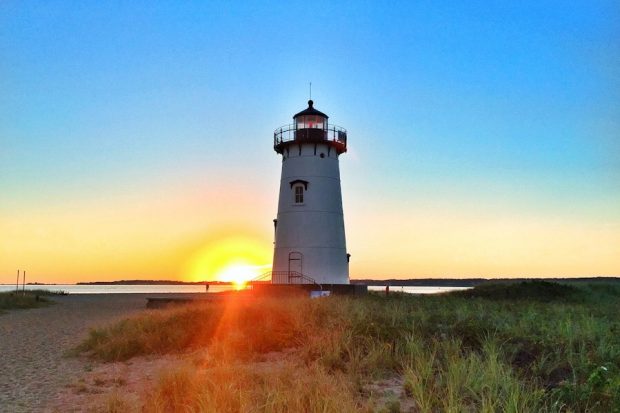 The Edgartown Lighthouse lit its light for the first time on October 15th, 1828. The lighthouse has changed a great deal over the years. So has the ground on which it stands. When it was first lit, the first lighthouse keeper, Jeremiah Pease, had to row a rowboat a short distance to the lighthouse which was a two-storey house constructed on wooden pilings. Two years later, the light was connected to the shore by a 1,500 foot wooden walkway. The rotten wooden pilings were replaced by a stone breakwater in 1840.

The light’s vulnerability to the elements saw a significantly higher turnover in keepers than average. Some of the keepers refused to live in the keeper’s quarters. The quarters were renovated several times, the last being in 1908. In 1938, the Great Hurricane caused irreparable damage. The whole structure needed to be replaced. The island purchased a lighthouse that had been built in Ipswich, in 1881, but was no longer in use. It was dismantled and brought in on a barge. The forty-five foot tower remains active today. Its characteristic is an automated red light every six seconds.

While a semaphore station had been put in place on East Chop in 1828, it would be a long wait for the residents to get a lighthouse. It seemed natural to have a lighthouse on the point to balance out the entrance to Holmes Hole Harbor, now known as Vineyard Haven Harbor. The word ‘chop’ means entrance into a body of water so marking both sides only made sense. Local seaman, Captain Silas Daggett, had been lobbying for its build since the build on West Chop, but had been unsuccessful.

Frustrated and out of patience, Captain Daggett built his own lighthouse on the chop in 1869. It shone a fixed red light. Unfortunately, the lighthouse burned down in December of 1871. Determined, Daggett rebuilt his structure and finally, in 1875, congress conceded that there was a need for the light and approved a $5000 build. The government purchased the station erected by Captain Daggett and construction began on a new dwelling and a cast iron, forty-foot tower. 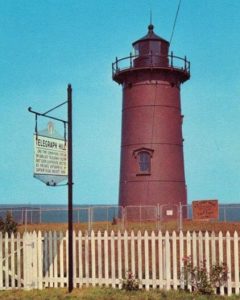 Many islanders, tourists, and summer DINKS, will remember The East Chop Lighthouse as the “Chocolate Lighthouse”. When it was originally built, the light was painted white, but in the mid-1880’s it was painted reddish-brown. If you watch carefully, there is a shot in the movie JAWS, when the ferry is coming in, and the “Chocolate Lighthouse” can be seen in the background! The East Chop Lighthouse stayed dark brown for an entire century, until the excessive heat and condensation inside the tower forced them to return it to its original white in 1988.

Everyone has their favourite. I have heard stories from all people across the globe about how their spouses proposed at the foot of their favourite lighthouse, how their great grandfather was a lighthouse keeper, and many, many more. Some stories are as simple as the hike to their favourite is something they like to do on their vacation each year. It doesn’t matter what the story is, what does matter is that the stories exist. Each and every one of these lighthouses play a big part in the mystique of Martha’s Vineyard, both on land, and in our hearts. Which lighthouse is your favourite?