As I have mentioned before, every time I go to Martha’s Vineyard, I make a point of doing something new. There was a point there when I realized just how easy it is to slip into the tourist’s habit of breakfasting at The Black Dog, shopping and lunching in Edgartown, walking Circuit Avenue, and supper at Nancy’s. Occasionally driving up-island to see the Gay Head Lighthouse and eat in Menemsha. There is absolutely nothing wrong with any or all of those things. In fact, I love them. But Martha’s Vineyard is one hundred square miles—there’s more to it than that. I realized that if I was going to get to know the island, the real island, I was going to have to find new things to do every trip. 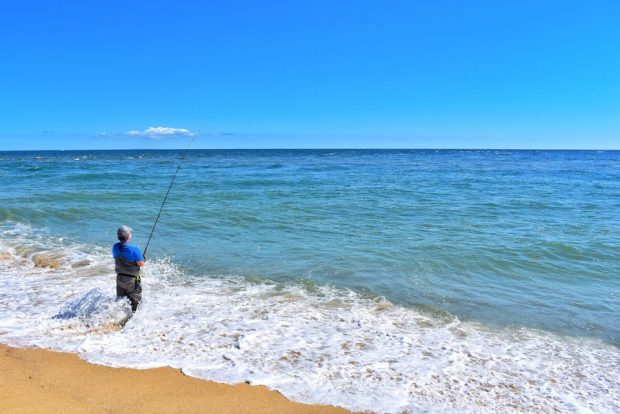 Last September, I was on-island during the Martha’s Vineyard Striped Bass and Bluefish Derby. I have always known about the derby—it’s a big deal. The prizes are huge. There are boats and trucks to be won and there are scholarships to be donated. The Derby donates two, four-year $10,000 scholarships and two, four-year $5,000 scholarships to island high school students.  The Martha’s Vineyard Surfcasters, a group of friends who like to fish together while competing in the derby, raises funds for two of their own scholarships with a used tackle sale. Just another way that the island community takes care of its people—I love that.

I had mentioned to my friend Lisa Belcastro, an avid fisherwoman, that I had never experienced ocean fishing and that it was on my ever-growing list of things to do. No sooner had I gotten the words out of my mouth, when Lisa jumped in with her characteristic exuberance, “You’re coming out with us!” Lisa is a member of The Martha’s Vineyard Surfcasters. 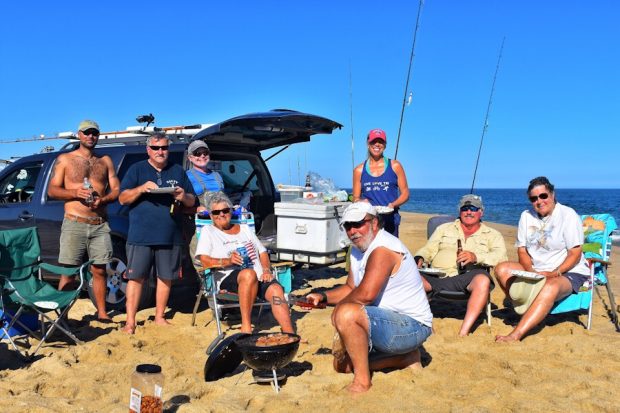 I had no idea what to expect. Lisa picked me up in Edgartown early in the morning. Well, not that early. I ate breakfast at Dock Street Coffee Shop before she collected me. If you ever want to eat a great breakfast and feel like a local—especially before a day of fishing—Dock St is the place to be. We took our place in line on Daggett Lane and waited for our passage to Chappaquiddick. We were heading to Wasque. I was getting more and more excited about the day ahead of me, the more Lisa filled me in! I love Chappaquiddick and I love Wasque. We had the perfect day for it. There really wasn’t a cloud in the sky. The sun was hot, but the breeze was cool. Speaking of cool, how cool is the ferry ride on the On Time II aka The Chappy Ferry? It doesn’t get much cooler than that. 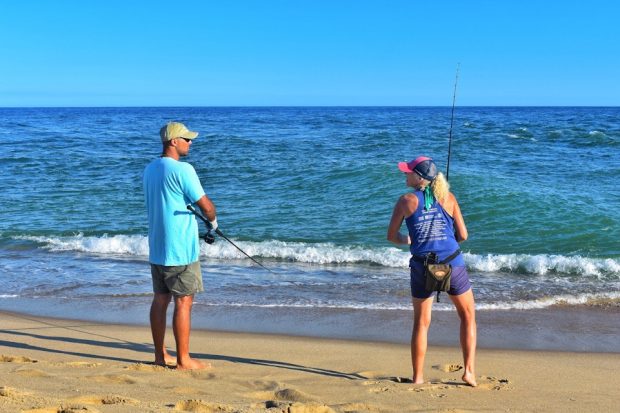 Lisa and I bounced along the beach in her Jeep. In the distance, I could see several trucks lined up, facing the surf. Poles dug into the sand. The ocean crashed against the shore and the scent was nothing but the sea. I knew it was mid-September, but this was summer. Lisa pulled up beside a group of trucks. I’m bad at vehicles. I’m sure some of them were Broncos and some of them were Blazers. I was so distracted by the beauty of Wasque Point that I was finding it hard to pay attention to anything else. I was also enthralled by the energy of the fishermen and women. As far as my eyes could see, men and women lined the beach with long poles raised in front of them. Some people were taking a break, sitting in lawn chairs that were nestled in the sand. I knew nothing about fishing, but I knew that at that moment, I didn’t want to be anywhere else. 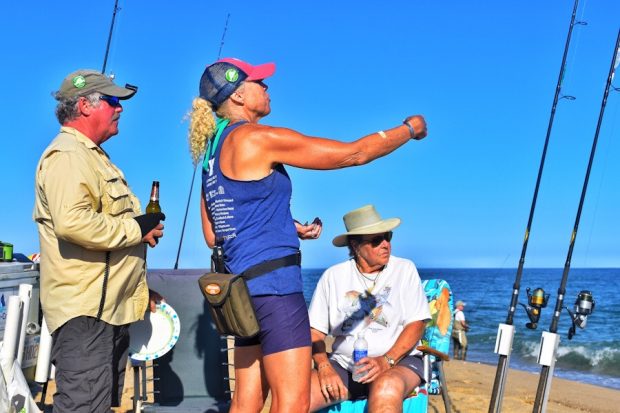 “Let me introduce you to the gang!” Lisa walked me around the Jeep and brought me to a group of ten or so people of all shapes and sizes. Men and women, older and younger. They were definitely as friendly and as happy a group of people as I have ever met. They were all extremely gracious and welcoming and very patient. I had all of the questions that you would expect a Canadian landlubber to have rolled up with the inquisitive mind of a writer. I remember Ursula, a woman with a kind face and a calm demeanour, was very patient with my questions. Ron made me laugh. Ron was kinda like Quint. Not the grumpy Quint, but the swapping stories over a beer comparing scars Quint. I felt like I should be following him around with a tape recorder. Speaking of tape recorders, Cosmo told a fish story that knocked all of our socks off and may or may not have swum its way into my fiction! I have a feeling that I will want to hear more stories from him. 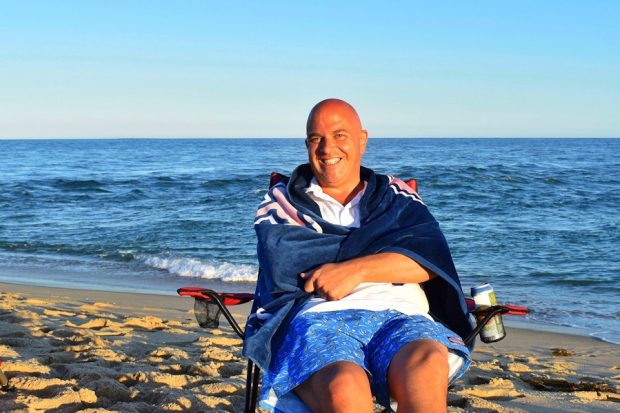 A lot of sun at Wasque

We ate a lot. I’m not even sure when and or where it all began. A small charcoal barbecue that could have been lifted right out of my childhood was lit in the centre of our little circle. There were a lot of memories jarred loose with that little barbecue. I live in the big city where barbecues have become insane outdoor structures connected to stonewalls and gas-piping all their own. In other words, they’re kitchens. Barbecuing used to indicate the smokey flavours of roughing it and the simplicity of nature. Somewhere, we lost the plot. This grill about eighteen inches in diameter, barely above the sand, was a real barbecue. I think we started with a fish that Lisa had caught as well as some fish that another Surfcaster caught earlier that morning. Then came chicken…and sausage (maybe two kinds?)…and steak. I remember a whole lot of pretzels filled with peanut butter. I’d tell you that there were a couple of beers here and there, but you probably wouldn’t believe me. 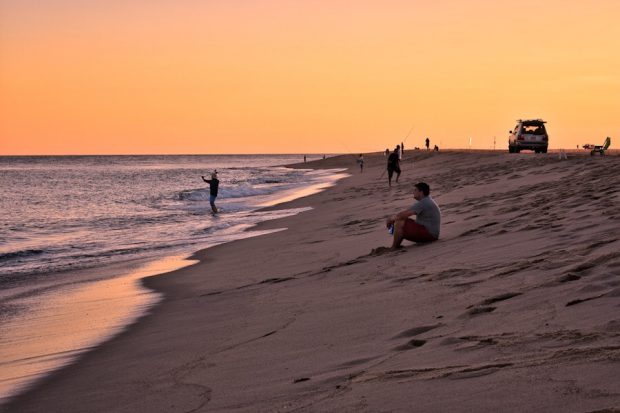 No fish were caught that day. I hoped that I hadn’t been a jinx. I had heard that fishermen were a superstitious lot, but if that idea crossed anyone’s mind, they didn’t share it with me. By the end of the day, I started to feel a chill. I got a lot of sun. The sun was setting when Lisa and I closed up the Jeep and began our drive back to the Vineyard. I’m sure that there is an excitement in catching a fish—weighing that fish in, and getting your name on the board. Lisa got a grand slam in that derby! Everyone on the team couldn’t have been more proud of her. There’s a lot of love and support there. In fact, just before Lisa and I had gone out, Lisa landed a bonito from the beach. Apparently, this is not an easy task. People were shouting out cheers and congratulations to her all the way to our meet-up point. I don’t know whether that’s a fisherman thing or an islander thing, but whatever it is, it’s enough to make me want to do it again.

I love this strip. What’s not to like? Nancy’s