Music has always been a big part of my life. My father is a music collector (by interest not by trade), my mother is a singer, and my brother is a DJ. Almost everyone in my extended family also sings and/or plays a musical instrument of some sort. When I think back to my childhood, I remember my Mother reading on the couch, my Father—also reading—sitting crosslegged on the floor in front of the stereo, playing records, and me, lying on my stomach in the middle of the floor, drawing. That’s it. There was always music playing. So, it was no surprise when my Dad and I went back to Martha’s Vineyard for the second time, eager to introduce my Mother to this idyllic island, my Dad made a mixed tape specifically with my Mum in mind. It was a cassette filled with ocean inspired songs. What my Dad saw as Martha’s Vineyard Music. He called it “Jane’s Tape”.

When I first started coming to Martha’s Vineyard with my parents, we always drove from Toronto. Things were a lot different then. For one, you didn’t need a passport to pass between the two countries, and second, the Canadian dollar was worth a lot more than the American, so coming to Martha’s Vineyard for a vacation from Canada was a pretty cheap trip. We didn’t stay in a hotel, we camped, and we always had a great time.

I remember having a great time in the car too. The backseat was my domain and it was filled with Star Wars paraphernalia, and rubber sharks. Looking around my apartment, not a whole lot has changed. I remember a STAR WARS story album that my Dad had recorded to listen to in the car for me and we listened to it more than once. I’m sure we listened to it more times than I remember and fewer than my parents do. I also remember Jane’s Tape, because while it wasn’t STAR WARS, I loved all the songs on it. 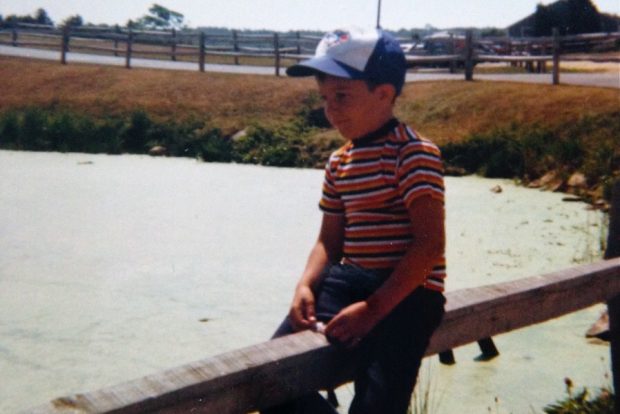 Most of the songs had something to do with water, not all, but most. That was the theme. My Dad’s record collection was and is monumental. It was still the 1980’s when he hit three thousand albums. So, making a tape of any theme you wanted was pretty easy for him. The first song on the tape was The Swimming Song by Kate and Anna McGarrigle. It’s a bright and happy song—perfect stroke to start a vacation. I think the next song was Wayfaring Stranger by Emmylou Harris. Now, granted, this song has nothing to do with water or the ocean. Water isn’t even mentioned, but it is one of my Mother’s all-time favourites. 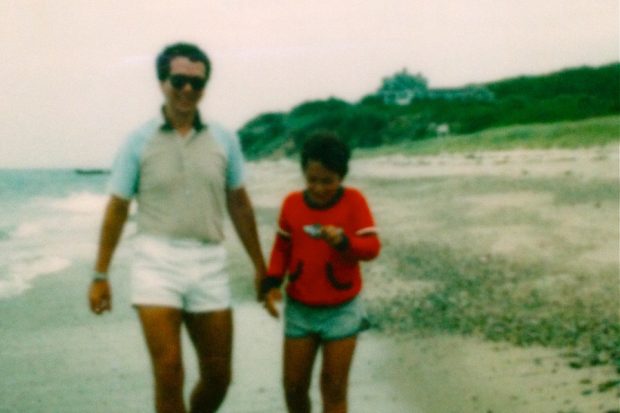 Dad and me on Menemsha Beach

Carey by Joni Mitchell came next, at least we think it did. Over the years, the tape would disappear and show up again. It became a big part of our lives. Finally, about twenty years ago, I set myself on a mission to try and figure out what had been on it once and for all. I missed it. The tape literally sang of summer. It was a feel good tape, and part of the Haskins heritage. I was determined to sort out the playlist. After Sunday suppers, my Mother and Father and I would spend time singing the songs and listening deep into our memories to find the beginning of one song at the end of the last. I think we came to the agreement that Carey was next. Joni sings a lot of having “beach tar on her feet”. It’s my favourite Joni Mitchell song. I’m not sure if it’s my favourite Joni song because of Jane’s Tape or not, but it really doesn’t matter. It’s a beautiful song.

As I said, I continued to try to sort together this tape out of my memory files and those of my family. Even my brother, who is ten years younger than I am and wasn’t even alive when we first played the tape, remembered it well enough to be able to give his opinion and if there are two things on my brother that I rarely question, it’s his knowledge of music and his memory. Everyone came in handy. There was a brief moment when I thought The Beatles classic Good Day Sunshine was on the tape as well as their Follow The Sun, but Dad looked at me sternly and said, “There’s no way I would put two Beatles songs on the same mixed tape. Give me some credit!” Of course, I knew he was right. Follow The Sun ended up being the tape closer. 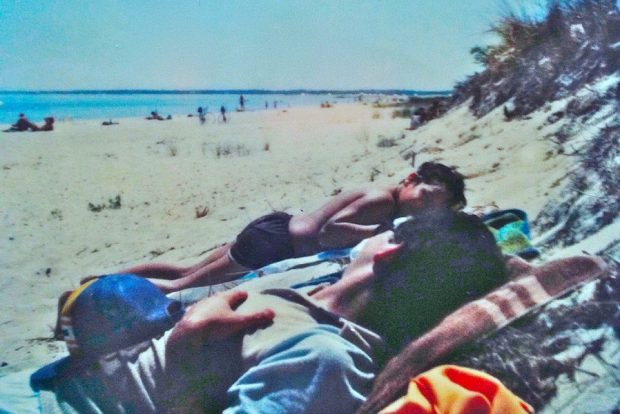 Dad and me on South Beach—Clearly, mom took all the pics!

The middle of the tape was more difficult to construct. We knew what songs were in it, but the order was still up for debate. I’m still not 100% convinced that we got it right. I even think that we may be missing one song, but my parents say that we’re not. It still makes for an exhilarating listen though. Cat Stevens’ Longer Boats, John Denver’s Calypso, Neil Young’s version of Four Strong Winds, and Carly and Lucy Simon’s Maryanne, are just a few of my favourites. That Simon Sisters song is one of the most hauntingly beautiful songs that I have ever heard. It is really too bad that it is so difficult to find. It was released as part of a children’s album that has long been discontinued. Of course, my Dad has it. What did I tell you?

Putting together the “tape” evolved from a CD to an iTunes playlist a few years later and the order that my family and I had come up with hasn’t really wavered. I still stare at it now and then to see if I can find what I believe to be missing. I don’t. It might actually be complete. So, while the order hasn’t changed, the format would change one more time in a way that I would never have imagined. Jane’s Tape was about to become a radio show.

My characters are always listening to MVYRadio. I’m a huge fan. I first started talking to Laurel Redington in the late summer of 2017. She was honouring my good friend, Captain Kurt Peterson of Catboat Charters (also an amazing musician—honestly, I can’t swing a baton without hitting a musician!) with MVYRadio’s Person Of The Week for his charitable works. Laurel and I stayed in touch and the more we talked the more she thought that I would be a good fit for her late night radio show, Nightcasts.

I was overwhelmed! Nightcasts is an hour long show! What could I possibly do that would make me come across as even remotely interesting for an hour? Well, Laurel had faith in me and armed with that knowledge, she told me to figure out the angle that would work for me. They say to start at the beginning. There are two things that have been a constant for me throughout the entire forty-one years of my Martha’s Vineyard life—JAWS and music. Music seemed the obvious choice and Laurel loved it! The obvious music was Jane’s Tape. 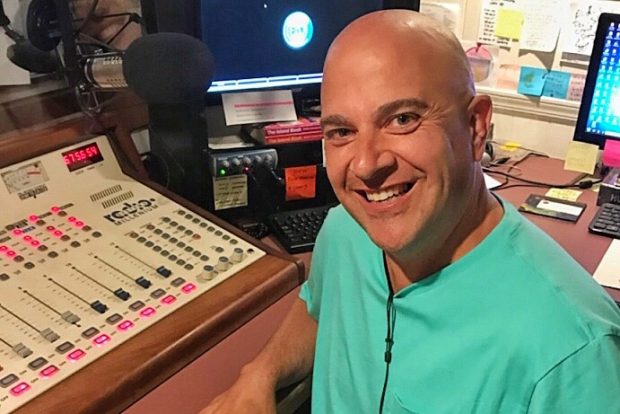 I was beyond nervous as I walked down the long dirt road toward the station. Convinced that I had made a wrong turn, I almost turned back a couple of times. I didn’t and I hadn’t. With hardly any signage whatsoever, MVYRadio is hidden away in an unassuming cottage among the trees in Vineyard Haven. I opened the door and stepped inside. There was no one at the door. I got the impression that there usually was,  but there wasn’t when I got there. I called out an awkward, “Hello?” like a teenager in a slasher movie who is about to get chopped up by a dude in a goalie mask. This was not lost on me. I was in the middle of the woods…there hadn’t really been any signage…see what happens when you write thrillers for a living? It’s amazing that I get any sleep at all.

Laurel bound into the room with her signature smile and energy. It’s impossible to be in Laurel’s presence and be in a bad mood. She’s gentle and loud, calming and excited—Laurel’s beautiful. I was worried that I had walked into my very own slasher movie only instead of Jason, I found Julia Roberts and the only thing killer about her was her smile. Laurel gave me a reassuring hug and led me into a recording booth. I had never been in a radio station before. The only time I had ever seen one was when I watched WKRP. I looked around at the photos of familiar rock star faces adorning the walls. I stopped at Carly Simon and said, “I love her.” To which Laurel casually responded, “Have you met Carly yet?” “No!” I said incredulously. Seriously, who am I? 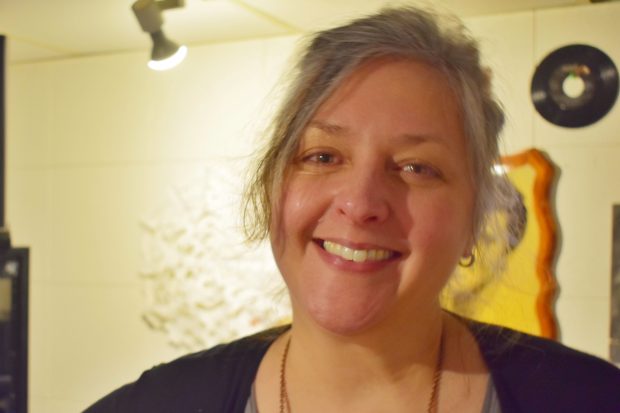 It didn’t take us very long to record the show. Laurel added in the music later. We just talked. My friends, and family, and I all sat up and listened to the show on the night that it aired. It caught me off guard. I thought that it was going to be cool to hear myself on the radio, but I was entirely unprepared for the emotional impact that hearing Jane’s Tape would have on me. The fact that Jane’s Tape, this collection of music that had been cherished by my family for forty years, was being broadcast across the globe was extremely touching. My family said the same thing. 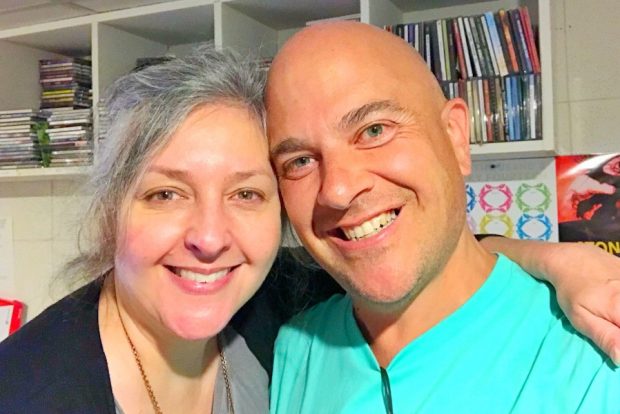 Laurel and I connected right away.

Hearing No Regrets by Tom Rush followed by Ian and Sylvia Tyson’s Farewell To Nova Scotia, songs I rarely heard anywhere else but in my family’s home, introduced and broadcast on MVYRadio was something for which I am eternally grateful to both Laurel and MVYRadio. It meant a lot to my family. Jane’s Tape continues to live on in my family; I’m listening to it right now. Music has this incomparable ability to touch our souls. It hits us at the very core. Music washes over me when I’m feeling blue and I ride its surf when I’m feeling high. Music is everything that I need it to be, when I need it. The only thing I could compare it to would be Martha’s Vineyard.