I used to rent a house in Oak Bluffs with some friends when I went to Martha’s Vineyard. It just got to the point where there were so many of us that it made sense economically. At one point, there were five or six of us renting a house just off of Barnes Road about halfway down Lagoon Pond. That meant that it cost us each about $350 for a whole week! You can’t beat that. It seems like we used to do it all the time, but the reality is that we only did it twice. Clearly, it had a profound affect on me. I even based my third novel, White Shark, on the experience and dedicated it to several of the people in the house. In the morning, just before dawn, I would get up and walk for breakfast and the ocean. Once, I realized that I could walk south, around Lagoon Pond, and up to Vineyard Haven to The Black Dog, that became my regular route. It’s a long walk but worth it. Along the way, I would pass Island Alpaca Company of Martha’s Vineyard. It was too early to go in, but I could see the alpacas in the distance. It interested me enough to put it on my ever-growing list of things to do. 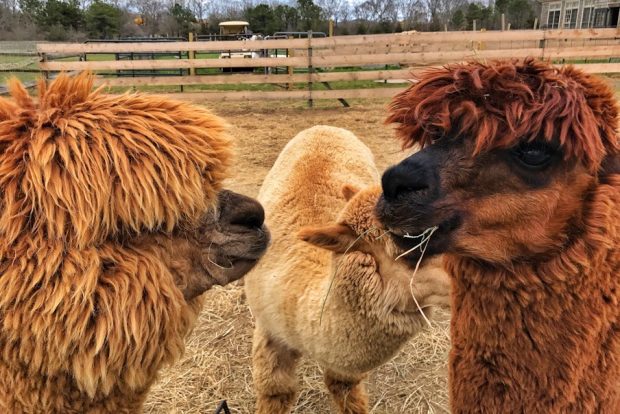 If you ever find yourself in the position of doing that walk, I strongly recommend it. There are very few cars on the road at that time of the morning. You’ll get a few here and there when you get to the roundabout where Barnes Road meets Edgartown Vineyard Haven Road, but before that, you won’t see anything but trees, water, and sharks. No, really! On the west side of Barnes Road, there is a cool house with a fence made out of old skis and they have a model shark hanging on their wall! It’s ultra cool. It’s very Martha’s Vineyard. There’s also a shark mailbox on the east side of Barnes Road. It has to be the spiffiest looking mailbox that I’ve ever seen. Once you hit the roundabout, turn right and continue up Edgartown Vineyard Haven Road. 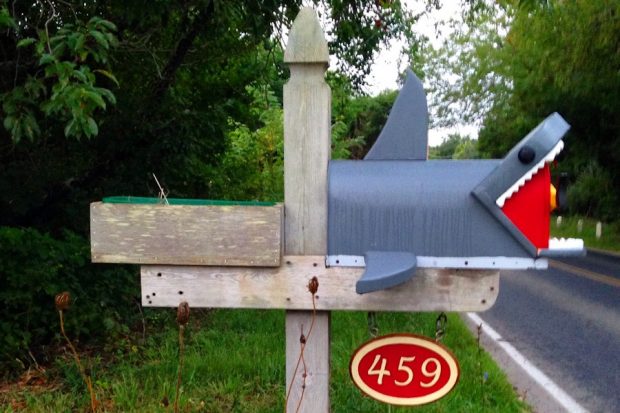 The topography changes dramatically when you turn. Barnes Road is largely hooded with a thick umbrella of trees. The sun light flickers and dances on the ground wherever it manages to wiggle through. On Edgartown Vineyard Haven Road, there is wide open space. You’re on a hill and you can see far into the distance. There are seemingly wild fields to your right and there are more organized and fenced fields to your left. Those fenced in fields are eventually marked with the sign for Island Alpaca Company of Martha’s Vineyard. I walked by this farm several times before I actually went in. I could see the alpacas running in the distance. They galloped not unlike a horse, but their necks are long and they move in kind of a scooping motion similar to a giraffe. I’ve always been an animal lover, but I knew nothing about alpacas. Were they the same as a llama? It didn’t really make a difference the more I thought about it because I didn’t know anything about llamas either.

What is an Alpaca?

Alpacas are from South America. They can be found in The Andes Mountains of Peru, Bolivia, and Equador, and Chile, and—as it turns out—Martha’s Vineyard. They are related to llamas, which is good because I feel less dumb, but they are much smaller. An adult alpaca will reach an average shoulder height of thirty-six inches and a weight of one hundred and sixty pounds. The average lifespan of an alpaca is fifteen to twenty years. Alpacas tend to be very intelligent animals. They are pack animals and like all pack animals, they have an alpha male. Another cool thing about alpacas is that they tend to be extremely hygienic. The group will decide on a communal dung heap, away from where they hang out and they will all use it. They’re kind of like cats and a litter box as opposed to cows and/or sheep who just poop anywhere and everywhere. While their cousins, the llama, are bred and raised as work animals, alpacas are raised for their coat. 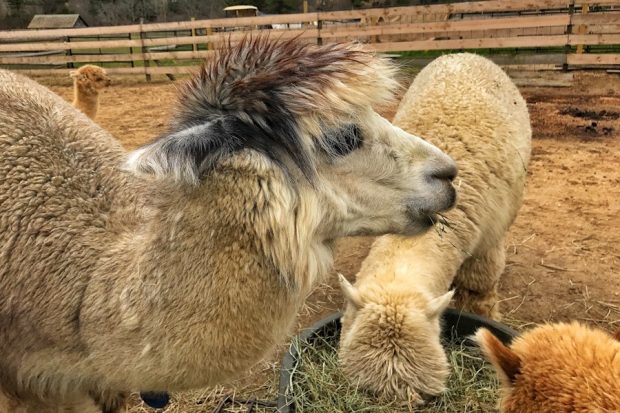 Alpaca fibre is used similarly to sheep’s wool except that it is, in my opinion, much better. It is warmer, it’s not prickly, and it bears no lanolin which means that it is hypoallergenic! It’s also, for the most part, less expensive. I’m not really sure why alpaca hasn’t caught on like wool has. It’s really cool stuff.

When I was on Martha’s Vineyard for my birthday in 2017, my friend Dave and I had just finished hiking the Menemsha Hills, when Dave said that he wanted to take me somewhere else before supper. We were heading back to Edgartown to meet up with our friends, Christina, Hali, Donna, and Kurt for my birthday supper at The Wharf. So far, my birthday had been one for the record books. I had been treated for supper the night before by my friends John and Sandra at The Newes From America because they couldn’t make my actual birthday and my friend Sandi had taken me out the night before for the same reason. 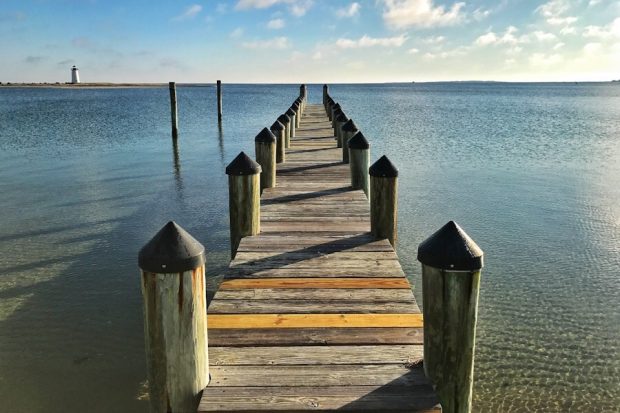 When my birthday actually hit, I was staying in Edgartown and, as per usual, I awoke before dawn. I was out for the sunrise and watched it from the Chappy Ferry. How perfect is that? I had breakfast with my friend Lisa at The Black Dog and then she took me to Cynthia Riggs’ house for homebred muffins! I told you this was a good birthday. Dave picked me up and we went to Aquinnah and hiked Menemsha Hills. We hiked Menemsha because I had never done it before. If you have been reading my posts, you know that is my thing—experiencing new things every time I go to Martha’s Vineyard. Now, Dave wanted to take a slight detour on our way back to Edgartown for supper. He assured me that we had time, but he wasn’t going to tell me where we were going either. All I knew is that neither of us had gone before—I was game. He took me to Island Alpaca Company. 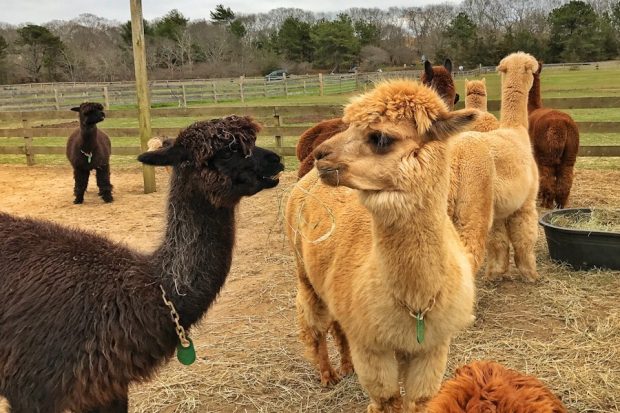 I  loved it from the moment we turned up the long drive. The alpacas running around on our left and the long row of trees sheltering us on the right. It was a beautiful place for a city boy like me to be. We parked the car and headed through the barn. There were a couple of alpacas inside, but almost all of them were outside. Who could blame them? We walked through the store and learned a little about the farm’s history. They started in 2004 with nineteen acres, a post and beam barn from Pennsylvania, and eight alpacas. Now, they have over fifty. They’re beautiful animals in every shade of coffee and caramel and cream that you can imagine. Their mop-tops comically hint of The Beatles.

They sell an amazing array of alpaca products. I have a friend who swears by their socks—cosy and warm. They sell everything from baby wear, to hats, mitts, and sweaters. I fell in love with their blankets. Everything was just so soft and beautiful. They also sell yarn in case you wanted to take some home for your own creations. You can also do yoga with the alpacas. I’m not sure why, but I think it looks and sounds really cool. I imagine the connection with nature, works toward connecting with your inner peace. Anyway, I’ll try anything once. The next time you are on Martha’s Vineyard, stop in at Island Alpaca Company of Martha’s Vineyard. Take a moment away from the beach or the lobster rolls, and the shopping. Spend some time learning about something new on the island. Take home a pair of socks. You’ll be glad you did. Hey—it’s The Vineyard!