For the purpose of this blog, I wish I could tell you that I raced around the island, on June 10th, trying new restaurants and hiking new trails, absorbing new fodder for my Martha’s Vineyard Mysteries. I wish that I could tell you that I visited new museums and attractions and took pictures on Martha’s Vineyard beaches that I had yet to visit (yes, there are still some, although not many). I wish that I could tell you—strictly for the purpose of writing an exciting new blog post—that I can recommend a list of new and thrilling tourist attractions that are new to the island this year. Alas, I cannot. I can’t tell you that I did anything new on June 10th. It was just another Edgartown day for me and it was perfect.

There is a constant argument that rages in my soul about which is my favourite street to stroll along on Martha’s Vineyard. Is it Beach Road with Nantucket Sound on one side and Sengekontacket Pond on the other? It’s either that, or it’s North Water Street with Edgartown Harbor peeking between regal Captain’s Houses. Tall, lush green trees and a view unfettered by overhead power lines. It’s a contest that really is too close for me to call. Maybe it depends on the time of day. Perhaps one is more suited to a sunrise and the other for a sunset. Either way, on June 10th, I found myself walking up North Water Street toward the Edgartown Lighthouse, and enjoying every minute of it. 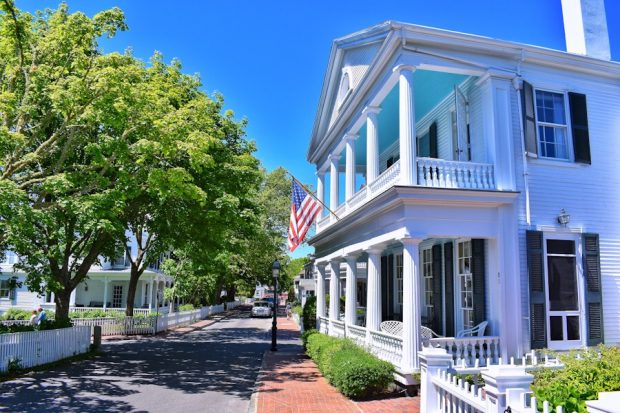 It’s really hard not to think about the not-so-distant history when the road was finished with white clam shells, and islanders only walked on the Harborside of the road—tourists walked on the sidewalk. Any photographer will tell you, North Water Street is a beautiful place to take photos. As I mentioned earlier, it is the only town street where the power lines have been buried. It’s an expensive process to bury power lines, but the wealthy inhabitants of North Water Street got sick of their power going out, and I suspect just didn’t like the look of them, and paid for their burial. The result is a street that looks even more like it may have centuries ago. 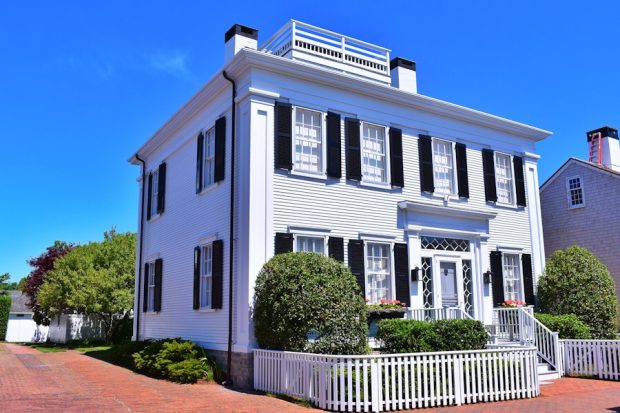 When I got to the lighthouse, I found that it was “open for business”! I’m always eager to climb a lighthouse. The “fee” is actually a donation to the Trustees for lighthouse maintenance. So, I always give as much as I can. The lighthouses are important to me. Can you imagine a Martha’s Vineyard without them? The five lighthouses are responsible for more of the Martha’s Vineyard mystique than anything else—in my humble opinion. The weather was bright and sunny—just another Edgartown Day—and camera in-hand, I climbed to the catwalk. 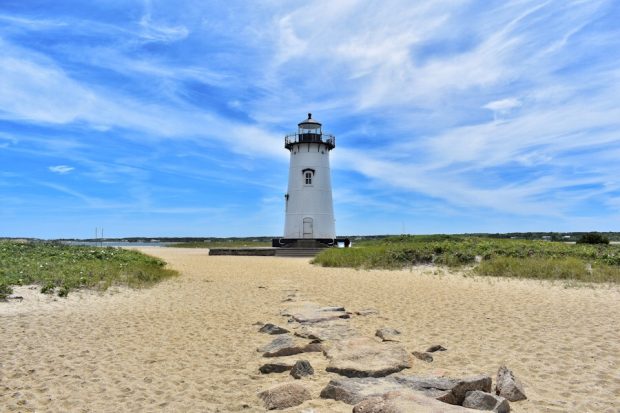 Even now, when I think about the view from atop that light, my eyes well up. Like the saying goes, “On a clear day, you can see forever.” Whoever said that could very well have been talking about the view from the Edgartown Lighthouse. The water is so blue. Green trees of Chappaquiddick outline its sun-bleached beaches. The beach that surrounds the lighthouse, a beach that doesn’t seem very big at all when you walk it, looks vast and deep from this vantage point. I could have stood there all day, watching the boats go by—sailboats, motorboats, yachts, and dinghies. On top of that lighthouse, so close to the sun and its warming rays, the chill of winter, the grey of the city, the stress of bills, loans, and responsibility, were all nothing but faint, indistinguishable odours in the back of my head. That’s the power of Martha’s Vineyard. I say that I could have stayed there all day, but the fact of the matter is that the beaches of Chappaquiddick looked too inviting. I climbed down the circular staircase inside the lighthouse and made my way to the Chappy Ferry. 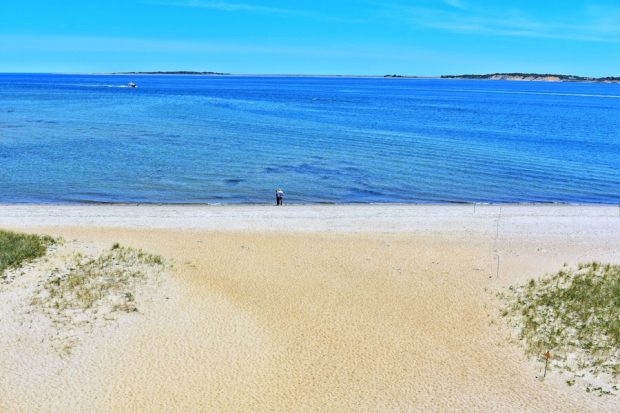 On a clear day, you can see forever.

I didn’t go far. I got on the Chappy Ferry—riding the Chappy Ferry is one of my favourite things to do in life—and when I stepped off on the Chappy side, I turned left. As soon as I hit the beach, I kicked off my Vineyard Vines flip-flops, and walked the beach about two hundred feet. With a good view of the Edgartown Lighthouse, and the coming and going “traffic” in the harbor, I dropped my bag and waded into the ocean. The water was still cold—MVYRadio had informed me that morning that it was 55º—but the sun was hot and it had been for a few days now. the cold water was bracing at first, then just refreshing. Being able to swim in the ocean is a treat. It’s a joy that not everyone gets to experience. I waded out of the water and took a seat on the warm sand. I sat on the beach for hours, just thinking. Tigress of Catboat Charters sailed by and I got some great shots. That was bound to happen. Sitting on the beach soaking up the Martha’s Vineyard sun is a very close second to sitting in Tigress’s cockpit soaking up the Martha’s Vineyard sun, but we’ll get to that. Eventually, I got hungry. 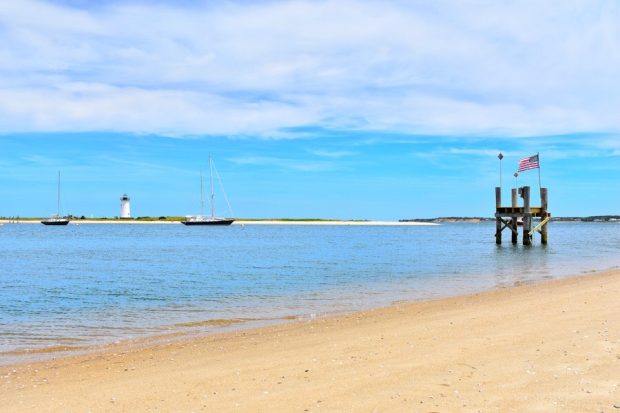 Amity As You Know Means Friendship

For lunch, I stopped at The Seafood Shanty and ate a lobster roll—of course, I did. The Shanty is located on the harbour and it definitely has the best view for a vacationer in Edgartown. Once I finished, I went down to the docks to meet my best friend, he was just pulling in on the most beautiful sailboat on the Eastern Seaboard. Captain Kurt’s guests were just getting off the boat so I hung back. Sitting on the dock in front of The Atlantic Fish and Chop house, I overheard a couple of young people talking beside me. “Did your camera pick it up?” “That’s crazy! I’ve never seen anything like that before!”, they were saying. 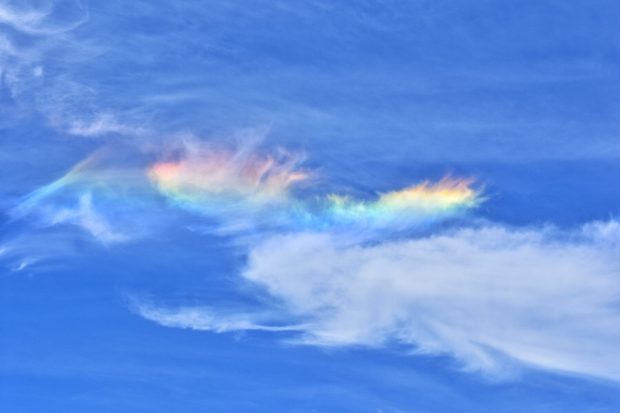 I looked in their direction and followed their gaze upward. I had never seen anything like it before either! There was a cloud hanging in the sky that was the colours of the rainbow. That’s the best way to describe it. It was a rainbow cloud! When Kurt finally concluded his business, I walked over and pointed it out to him. Casually, he said, “Oh yeah. Cool.” He looked back at me, smiled, and nodded as if I had just told him that I had just heard James Taylor on MVYRadio—nice, but so what? “Have you seen that before?” I asked. He nodded, “Lots of times.” Clearly, this was just another difference between working in downtown Toronto and working on a sailboat in Edgartown Harbor. I believe that’s game, set, and match, for Captain Kurt Peterson. 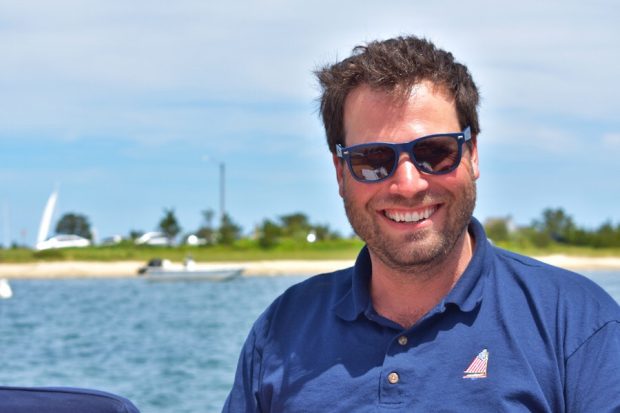 Laughing with a friend cures everything.

After we sat at his mooring for about an hour, Kurt returning phone calls and booking charters, me soaking up sun and watching the world go by, we headed out toward Cape Poge. The wind was about 10 to 15 knots, I remember that we kept a reef in and he tied in another just before we docked for his next sail. But I’m getting ahead of myself. There’s something about the force of the wind, directing you out over the water. I love the sound of the waves, the clang of the buoys, and the yawns that can only come from a ninety-two year old wooden boat. I love the flap of the sail, and I love laughing with my friend. It really is amazing to me how the final two hours of a shift at work can seem like a life sentence, but two hours out on Tigress is always over in the blink of an eye. Einstein’s theory of relativity summed up perfectly, right there. 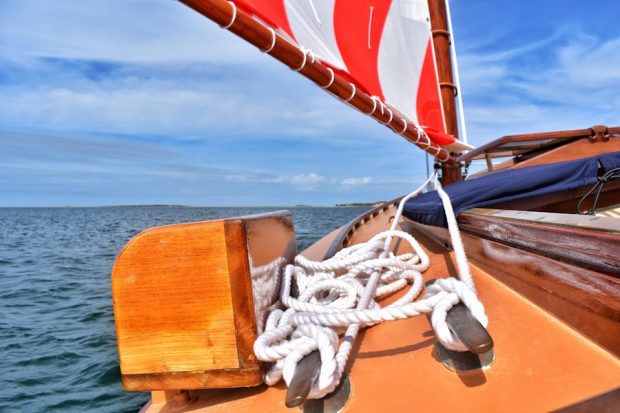 Edgartown Board Of Trade

I stepped off the Old Port Harbor Launch and onto the Edgartown Harbor. My next stop was The Edgartown Board of Trade Summer Social at The Town MV. Edgartown Board Of Trade really has it down. The business owners and representatives really work hard to connect with each other and talk about trends they are seeing within their township. This is clearly important to them. There is a summer social to kick off the season and there is an end-of-season social as well. The Board works hard to maintain a thriving and popular social media presence through Shored Up Media. Last year was the first year that they invited me to join in the festivities and I was really honoured! Because of my affiliation with a couple of Edgartown businesses and all that I do to promote the island and its townships, they seemed to think that I had a place in their midst. I couldn’t be more grateful. In fact, I was quite happy to connect a couple of business people with their great organisation this year! It really made me feel like I was part of the community. That’s what it’s all about. 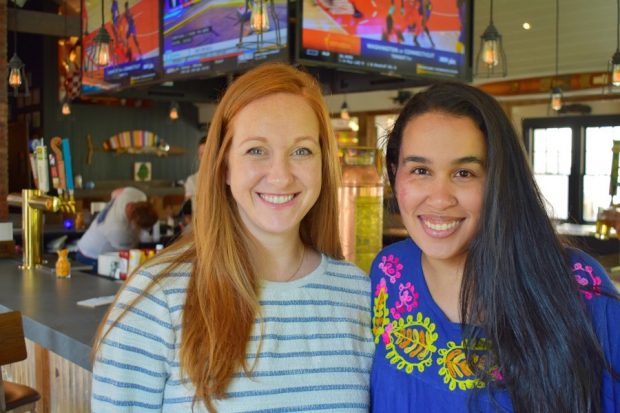 Erin Ready & Marnely Murray of The Edgartown Board of Trade

Martha’s Vineyard is a glamorous playground for politicians and celebrities. It’s a small island with world-class beaches and fantastic lobster rolls. It’s a harbour full of sailboats and fishermen. Above all else, Martha’s Vineyard is a community of hard-working, kind, and friendly people. The closer I get, the more I’m able to see the forest behind the trees—and it’s beautiful. Just another Edgartown Day.