Some time ago, I made a promise to myself that every trip to the island I would do at least a couple of things that I have never done before. In part this was to aid in researching my Martha’s Vineyard Mysteries but mostly it was to get to know my island as best I could. You would think that after all this time, I would be running out of things to do, that this would be getting more and more challenging. Quite the opposite is true. Each time I check something off my to-do list I add four or five more things to the same list. My list grows continuously and there doesn’t seem to be any sign of it slowing down. I’m totally good with that. I have been to Aquinnah many times. I have swum her beaches and eaten in her restaurants. I have photographed her repeatedly. What I hadn’t done, until yesterday, was walk from Gay Head Lighthouse to Menemsha Harbor. So, that was my plan. I headed out early and my day was a long one. 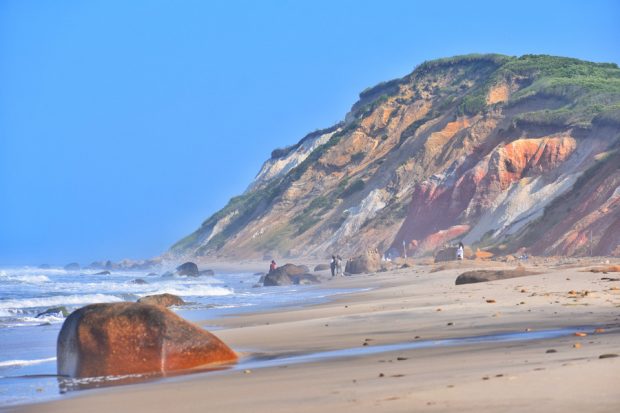 I was up and out of the house at six a.m. I knew that Black Dog Bakery opened at six and they had breakfast sandwiches to-go. I figured I would grab one of those and eat it while I waited for the bus. It had been a long time since I had taken the VTA up-island but it seemed to me that they didn’t run as often as the numbers one and thirteen buses ran down-island. I went into the Dog, grabbed a coffee and a breakfast burrito and headed to the bus stop. My bus was there! I just made it! I stuffed my burrito into my knapsack figuring that I would eat it when I changed buses at West Tisbury Town Hall. Taking clandestine sips of my coffee on the bus was one thing, scarfing back a breakfast burrito was quite another—just not cool. 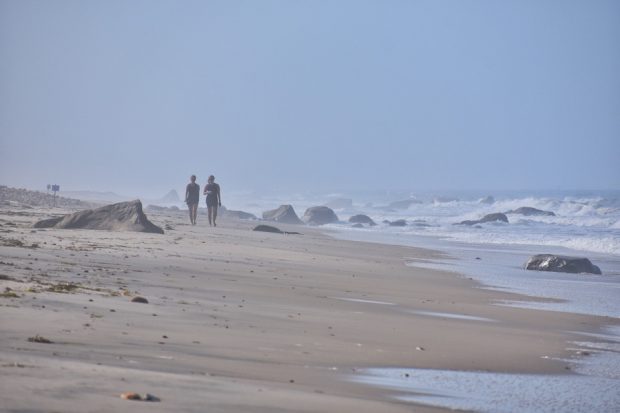 When I got to West Tisbury, that bus was there too! My driver very kindly radioed the other bus telling him that I was heading his way and asked him to wait for me. I was so grateful. “Don’t the bus drivers do that for you in Toronto? You’re Canadian! You’re all so nice!” Yeah, they don’t. When I got to the lighthouse, I asked my bus driver if he knew how long of a walk it was back to Menemsha Harbor? He said he didn’t exactly know but he also thought that it was a very dangerous road to walk. There were a lot of twists and turns and the roads were narrow. He pulled out a map and suggested that instead of trying to go on the road we had just taken, I take Lobsterville Road and head toward the Menemsha Bike Ferry. You know what I was thinking? I had never done that before! I thanked him very much and headed up to the cliff to take pictures. 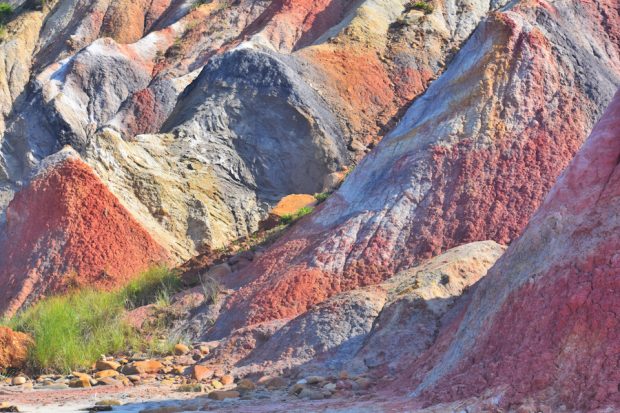 Moshup The Giant Left His Mark

I don’t know how else to explain it—Aquinnah is ethereal. The fact is, if you have been to Aquinnah then you totally get what I am telling you; if you haven’t been to Aquinnah, then you don’t. It’s just one of those things—like the entire island really—that has to be experienced firsthand. The morning was already heating up and there was a mist over the beach at the base of the cliffs. I took a couple of photos and remembered my burrito. The Black Dog staff had wrapped it tightly in tin foil and it was still hot and delicious—thank you Black Dog! I stood there chewing the tasty mixture of egg, tortilla, and cheese. Looking out over the ocean and listening to the boom, boom, boom, of the waves below me, I realized that in no way, shape, or form could I be any happier. 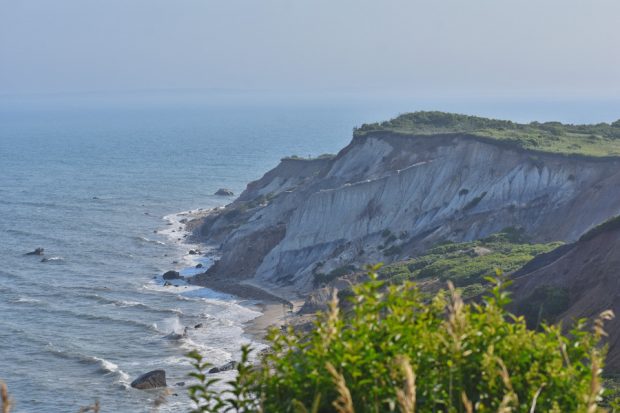 The Best Place To Eat A Breakfast Burrito

The last year and a half has been so tough on all of us. We all have that one thing that really does it for us. I cannot recommend enough that you figure out what does it for you and get out there and do it now. We have been carrying around a lot of anxiety and stress. Standing there atop the Aquinnah Cliffs, I felt mine wash away. Each crash of the waves below eroded a little bit more of the walls I had built around me. I was home. I headed down toward the beach.

You can totally see why Moshup The Giant chose Aquinnah as his home. Everything is big. Everything is majestic. When I am walking the beaches of Aquinnah, I can still see Moshup The Giant wading into the ocean to catch a whale for his supper and a whale for the supper of the Wampanoag People. It’s not hard to imagine the cacophony of the waves being caused by his steps into the sea. Legend has it that these are tales of long ago but the cliffs are still red from the blood of those whales. I’m not entirely convinced that they didn’t just happen yesterday. Maybe I just missed it that morning. Who knows? Aquinnah will make you believe anything is possible. 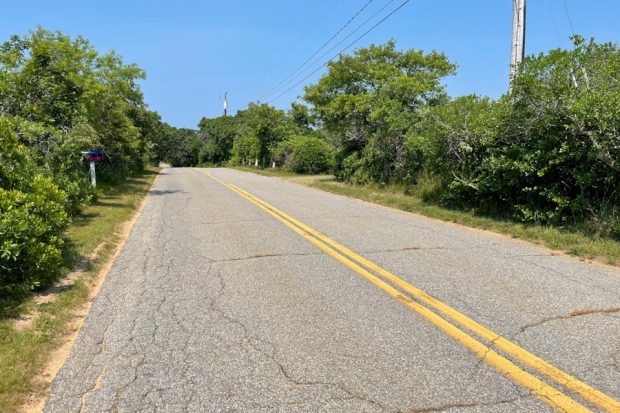 Lobsterville Road Is A Long One!

There’s a lot of love on Moshup Beach. I saw young couples getting wedding photos taken and I saw young nudists enjoying the freedom of being there together. I love the fact that people were there, enjoying themselves and the island. They were feeling their own personal magic in the most positive way. You can’t help but be moved  by that.

From Aquinnah to Menemsha

I knew I was on the right road because periodically a group of cyclists would cross my path, mostly coming from the other direction. That gave me confidence. If they were headed in the same way I was, there was a distinct possibility that they were just as lost as I was. I say lost, but really there hadn’t been any turn offs so I was feeling confident but there is this feeling that comes over you when you walk a road that you have never walked before for a very long time. It was a LONG walk. I have since mapped it out and it turned out to be nine miles. I really hadn’t expected that. I thought it would be a lot shorter. So did my feet. When I do it again—and I will—I will make sure I bring a bottle of water/Gatorade and I will not be wearing brand new flip-flops. 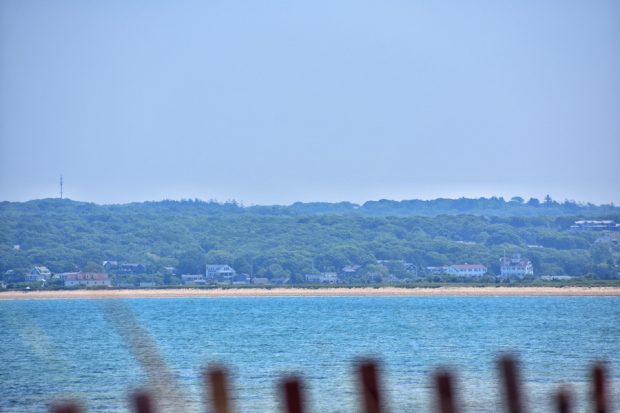 Menemsha As Seen From Aquinnah

It was a pretty exciting sight when I could see Menemsha in the distance. I was getting close and I had never seen Menemsha from this angle before! That was very cool. By the time I got there my left foot was a mess. Oh well, what are you going to do? Eventually, I got there. 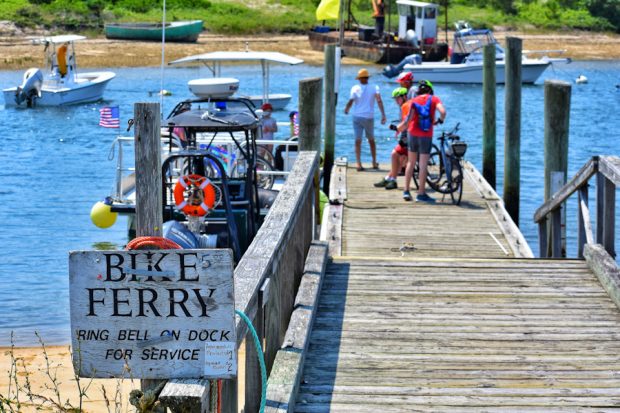 I knew the bike ferry existed but I had never taken it. I was excited! It’s essentially a pontoon boat that takes cyclists and pedestrians across the harbour for five dollars per person. I should have asked the skipper—he was a lot of fun and we had a laugh—how long the trek was but I forgot. I think it might even be a shorter distance than The Chappy Ferry. When I got to Menemsha I was hot and hungry. I bought a chocolate dipped ice cream cone and two bottles of water at The Galley. Then, feeling somewhat rejuvenated, I went for a swim on Menemsha Beach. That did me up solid. The day was perfect. The beach was populated but not crowded. It really is incredible how many people think that Martha’s Vineyard is insanely crowded in the summer and that is certainly true if all you do is walk up and down Circuit Avenue in Oak Bluffs or try to get a table at The Seafood Shanty in Edgartown but there is so much more to The Vineyard. 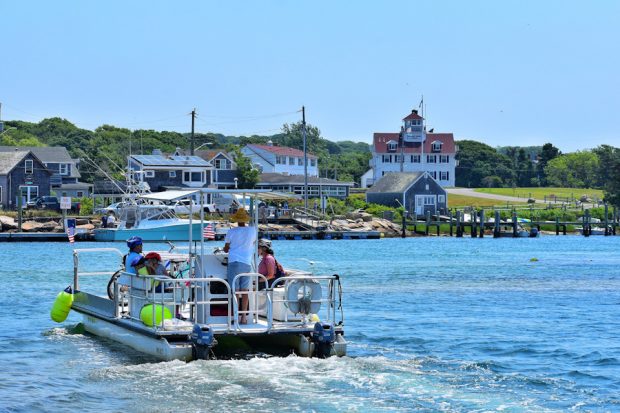 I texted my friend, the photographer Andrew Bluestein and told him I was heading toward The Galley for lunch. He said he would meet me there. I asked him to bring Band-Aids for my foot. Ugh…

When Andrew showed up he looked every inch the islander—flip-flops, surf shorts, t-shirt, ball cap, and a Jeep with no roof or doors. “Have you ever been to Waterside Market in Vineyard Haven?” I actually hadn’t. This checks another thing off my to-do list. “Well, they make, in my opinion, the best BLT on the planet. Do you like BLTs?” I told him I did but that “best on the planet” was a pretty lofty statement. Andrew also said that he was meeting a friend down-island and he would happily give me a lift back to VH. Not only do I love riding in Jeeps with no doors, my feet were still kvetching. I jumped at the chance. We buckled ourselves in and Andrew turned on the radio. Jimmy Buffett was belting out “Cheeseburgers In Paradise“! You can’t make this stuff up. This was turning into one of the most Vineyard days I have ever had. I was totally digging it. 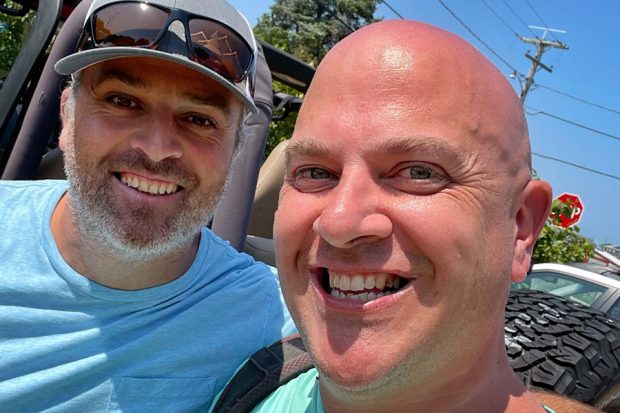 Amity As You Know Means Friendship!

I don’t know what to tell you. That sandwich was the freaking bomb. I can safely say that I have now had—at the very least—my favourite BLT. The Waterside Market is in Vineyard Haven on Main. I highly recommend checking it out. Andrew and I said our goodbyes and he made his way to Oak Bluffs. I headed to Chappaquiddick. 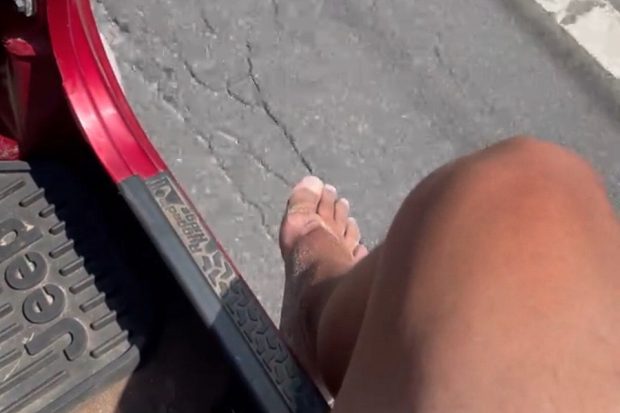 The Most Vineyard Way To Travel

You Can’t Spell Chappy Without Happy

My day wrapped up with another swim. This time on a Chappaquiddick Beach. I sat and relaxed waiting for Tigress to sail by so that I could grab a few shots. Some of them are really cool. Chappy beaches are perfect swimming beaches—okay maybe not Wasque—and at the end of a hot day spent entirely in the sun, that was just what I needed. 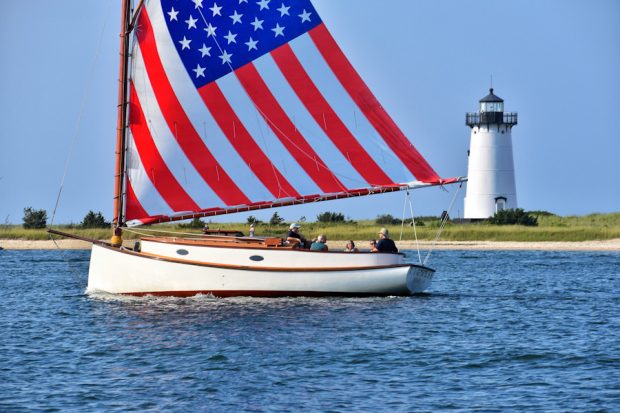 Tigress And The Edgartown Light Were Made For Each Other

As the sun was getting lower, I looked around Edgartown Harbor and remembered that feeling that I had some twelve hours prior on the Aquinnah Cliffs. That overwhelming sense of pure joy. I realized that feeling had stayed with me all day. It had never left. From one end of the island to the other I had been at peace. That’s not really a surprise to any of you, is it? Hey, it’s The Vineyard!

I spent the day out on Vineyard Haven Harbor at th

I was making friends out in West Tisbury yesterday

Terrific dinner at Copper Wok in Vineyard! A dear

Off the hook morning with Dan and Guinevere!! Chat

Chillin’ on the beach with the sandpipers! I lov

Up-Island to Down-Island on Martha’s Vineyard

Back On Martha’s Vineyard 2021

Last year was hard on everyone for a lot of different reasons. I could feel Martha’s Vineyard screaming my name…