When I started back to Martha’s Vineyard this year, I new it was going to be very different from my trips in the past. First and foremost, I was coming for the entire summer! I had never done that before. Also, I was planning on working on my Martha’s Vineyard Mysteries while I was on-island. That was new for me too. Usually, I come to the island and absorb as much culture as I can and then I take it all home and write about it. Being here for a week or two at ta time, if I spent all of my time at the computer, I would miss the entire island experience and that would not be cool. This time was different. I could absorb as many new things as I possibly could and then commit them to “paper” while they were fresh in my head. That’s where these blogs come in. Essentially, they are diaries of my exceptional experiences on the Vineyard. The experiences of which I don’t want to lose a morsel. I want to savour every last flavour, every last minute over and over again. That brings me to last night. What did I do last night that was so special? Well, last night, I had dinner…

My friend Marnely Murray is one of those people who seems to know everyone. It’s not too surprising. She is beautiful, outgoing, gregarious, and smart. In short, she is a people person. I’ve been on-island now for almost two weeks and Marnely and I still hadn’t connected. So, when she texted me and asked if I wanted to have dinner with her at Among The Flowers Café, I jumped at the chance. Can you guess why? Of course, I hadn’t seen my friend since I had arrived and I hadn’t been on-island in an eternity but also, I had never been to Among The Flowers Café for dinner before. You know how I love trying new things. 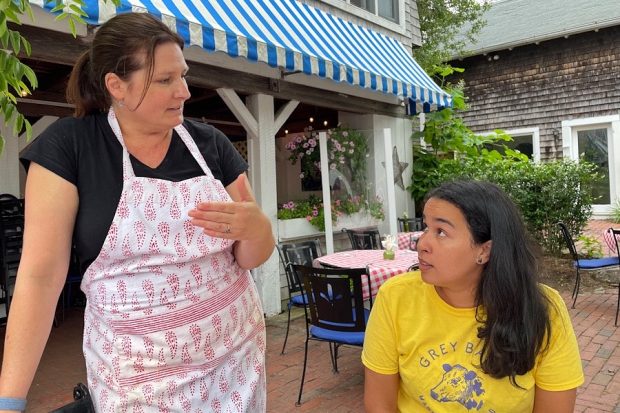 Quahogs Among The Flowers on Martha’s Vineyard

Restaurants have come and gone on Martha’s Vineyard but Among The Flowers Café with her signature blue and white striped awning has been a fixture in Edgartown for forty-three years. The Toomey family have owned her for almost twenty! That says a lot for her reputation. I have had many great breakfasts there. It’s a popular spot! Every time I post about it on social media I get a lot of comments— “Our first stop as soon as we dock!” is a popular one. “Our favourite breakfast spot!” is another. So, I was excited to return there for dinner and see what an evening would be like. 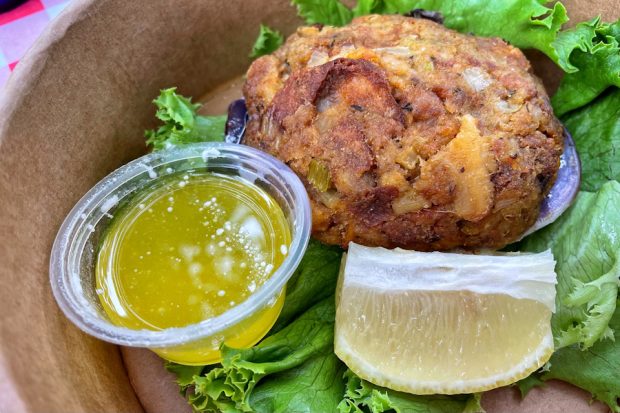 When Marnely and I got there, we were greeted warmly by the owners, Polly and Pat Toomey. Polly and Pat are married and their kids work there too! I am very fond of a family restaurant. Few things make you feel quite as at home. When Dad is the chef, your chatting with the Mom, and the super nice son is your waiter, sitting outside in Edgartown, eating at Among The Flowers has a homey backyard feel to it. The flowers probably also have something to do with it. As neither of us are big drinkers, Marnely and I both decided to stick with flat water. Our first course came out—stuffed quahogs! 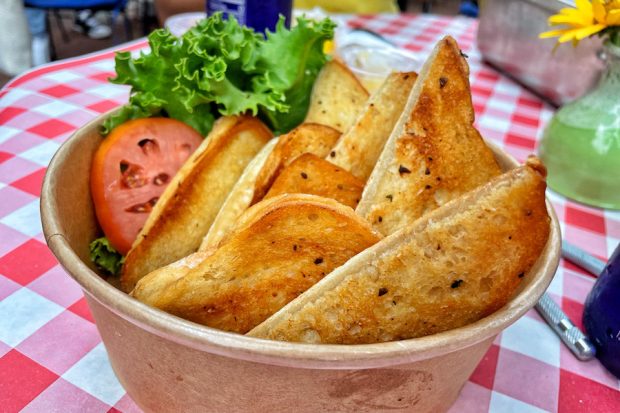 I love a good bread basket.

I am a big fan of stuffed quahogs when they are done right. When they aren’t they just taste like stove top stuffing crammed onto a clam shell. The quahogs at Among The Flowers might just be the best ones I’ve ever had. They were full of big pieces of meat and rich with flavour. The crunch from the celery was just enough. What a great way to start off a seafood extravaganza! I couldn’t wait to see what was coming next!

Lobster Among The Flowers on Martha’s Vineyard

Because we wanted to try as many options as we could, next, Marnely and I split a lobster roll. I know what you’re thinking, “There’s no way you ever split a lobster roll with anyone in your life!” It’s true though! I did! Marnely and I split a lobster roll. Normally, I opt for a cold lobster roll but this time we had a hot one and drizzled with butter, it couldn’t have been more satisfying! It was filled with big chunks of lobster and the roll was full of flavour. Tip: If you love dill pickles like I do, Among The Flowers has great ones and if you go with Marnely, she hates pickles which is awesome. Speaking of full of flavour, we were given a bread basket that was freaking awesome. I’m a bread guy—I’m Scottish and French gimme a break—so bread baskets are big for me. I thought that it was garlic bread made with a brioche but according to Polly it was a focaccia. It was dense and sweet and it rocked my world. 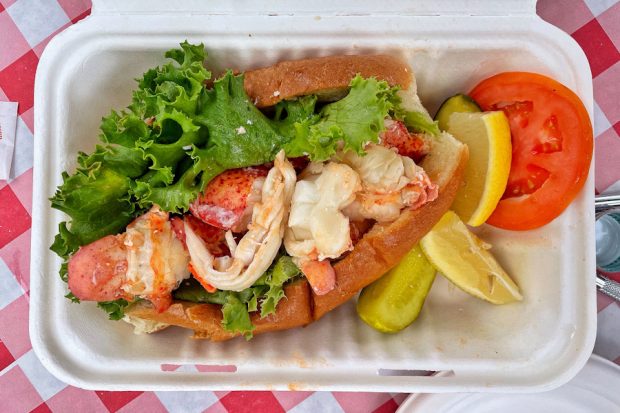 Chase, Polly and Pat’s son, came and placed a metal bin on our table which he immediately filled with an overwhelming pile of new potatoes, corn on the cob, linguiça sausage, clams, mussels, and a whole lobster. This is Among The Flowers’ New England Clam Bake. I happen to think this is pure genius. Clam bakes are difficult to do. You have to lug a lot of equipment and ingredients to the beach or you have to make a pretty fair sized mess in your kitchen. By going to Among The Flowers, you get to sit on Edgartown Harbor, people watch, boat watch—we were watching Tigress of Catboat Charters come in and out—and enjoy an incredible meal. It’s definitely an order to be shared. They can adjust it by adding a lobster if you each want your own but I’m here to tell you it is a lot of food at a very reasonable price. 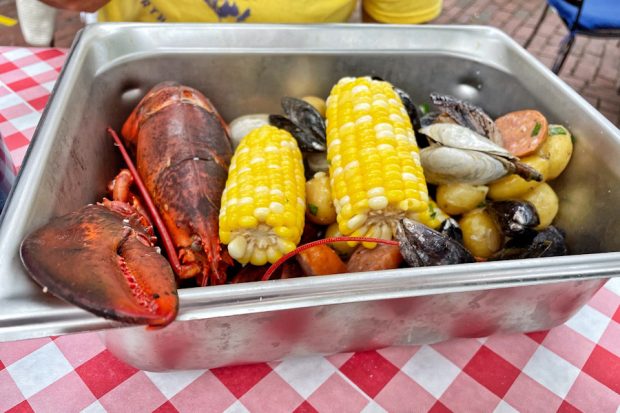 A New England Clam Bake at Among The Flowers

There’s a camaraderie in cracking open lobsters and pulling mussels from a shell. Interactive meals spark conversation and laughter. To say that Marnely and I had a good time at Among The Flowers would definitely be an understatement. All that seafood, Edgartown Harbor, watching the fog roll in, it was all a very Martha’s Vineyard experience. One that I thought was coming to an end…

Strawberries Among The Flowers on Martha’s Vineyard

“There’s strawberry shortcake still to come and I want some!” Marnely said. “What?” I asked. I was sure that I misheard her. “Polly said she wants us to try the strawberry shortcake. I have to try and save room!” I really hadn’t been paying attention at all when Polly and Marnely had been going over the menu, deciding what to eat. There was a moment when Pat had introduced himself and he had said, “I’ll bring out some stuff…” and walked away. I literally thought that had been the end of it. That wasn’t unheard-of for me. More often than not, when I go to a new restaurant, I will ask them to bring me their favourite dish. I have never been disappointed. This time however there had apparently been talk of strawberry shortcake. I was stoked. The desert came—again we split it I’m happy to say—and it was pretty as a picture! The sweetness of the berries and the strawberry sauce, whipped cream, and the home-baked biscuit were the best end I could have hoped for. 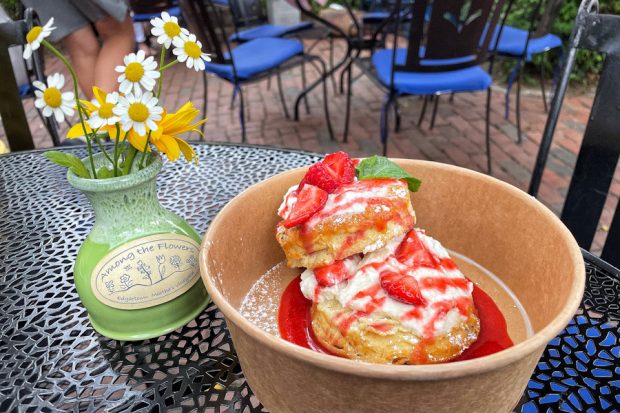 Among The Flowers’ Strawberry Shortcake

Polly, Pat, Chase, and their team really have something special. Speaking with them, it’s obvious they truly love what they do and where they do it. Special family memories are tied to different moments in the history of the restaurant. Chase blew Marnely and I away because he was so professional at such a young age. When I was his age, I wasn’t doing anything except watching back-to-back episodes of Three’s Company! 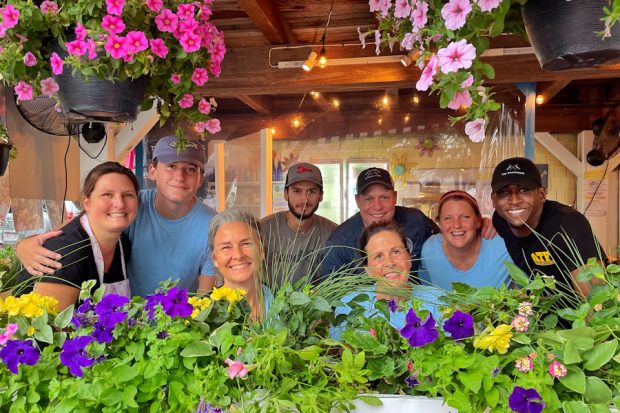 Among The Flowers has an incredible team!

I love learning about places that are distinctly Martha’s Vineyard. Among The Flowers Café is just such a place. When you’re eating incredible seafood but you’re dressed comfortably and casually, you know exactly where you are. Hey, it’s the Vineyard!