Saturday, July 17th was one of the reasons why making a trip to Martha’s Vineyard this summer was an absolute must. I know what you’re saying, “Crispin, you always feel like travelling to the Vineyard is an absolute must!” and you’re right. That’s a fair statement. But on Saturday, July 17th there was going to be a catboat parade led by my best friend Kurt Peterson and his incredible catboat Tigress of Catboat Charters. It was all tying into an impressive art exhibit at Old Sculpin Gallery focussing on catboat builder extraordinaire, Manuel Swartz Roberts, the catboat’s place in Martha’s Vineyard history, and some wonderful renditions of catboats in a variety of mediums! How could I miss it? I couldn’t. Missing the exhibit would have broken my heart. So many people I love were involved and catboats themselves have become near and dear to my heart! I had to be on-island for July.

The Day Begins On Edgartown Harbor

I got to the harbour a little before ten o’clock a.m.—Have you noticed that I flip back and forth with my spelling of ‘harbour’? My rationale is that I am Canadian therefore, I spell ‘harbour’ with a ‘u’; however, ‘Edgartown Harbor’ is a proper noun and therefore, there is no place for a ‘u’ in it—and the plan was to connect with Captain Kurt a little before the meeting of skippers and captains that was going to take place in The Commodore’s Room at The Edgartown Yacht Club. It was going to be a slow, quiet start to the day with coffee and burritos. I hadn’t been seated on my bench for more than a minute when my friend Mark Alan Lovewell sat down beside me! I was thrilled to see him. 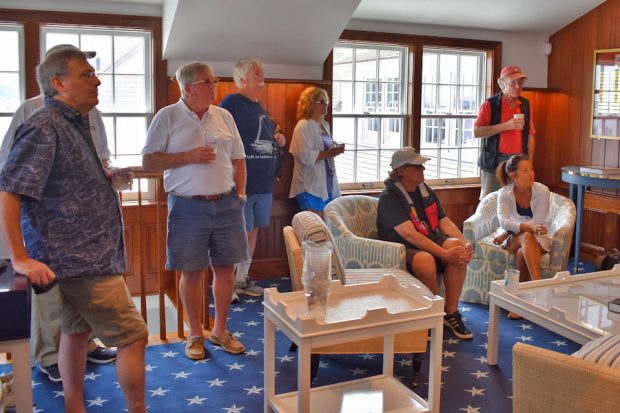 Mark is a catboat enthusiast, a member of the Catboat Association, and the skipper of The Sea Chantey! Sea Chantey is a beautiful catboat and she was signed up for the parade. Soon, we were joined by a couple more catboat skippers—some seasoned and some new. By the time Kurt got there, we already had quite the congregation. The day was heating up already, so we headed toward The Edgartown Yacht Club where we were offered ice water in a beautiful, air-conditioned room.

I could be wrong but I think it’s fairly safe to say that no one spends as much time on Edgartown Harbor as my friend, Captain Kurt. Beginning Memorial Day and sometimes going through to Columbus Day, Captain Kurt and his team are sailing Tigress through the harbour, day in and day out—weather permitting. One winter, Kurt even Captained The Chappy Ferry! That’s a lot of man hours on the harbour! It only seemed fitting that The Old Sculpin Gallery reached out to Kurt and Catboat Charters to help lead the parade. 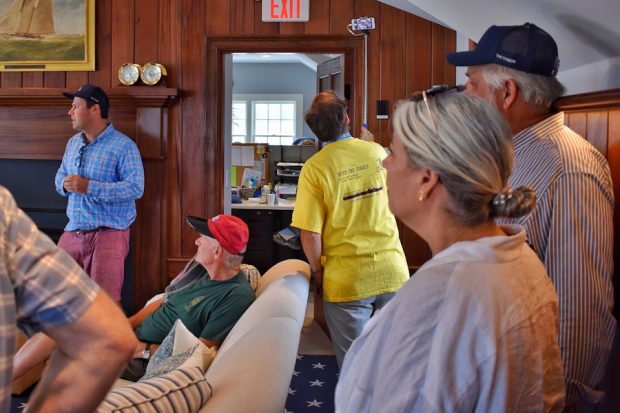 Captain Kurt lays out the route and answers questions.

I hung back in The Commodore’s Room while Kurt talked the skippers through the route of the parade and answered all of their questions about the harbour itself. Some of the skippers had come in from Chatham and some from Nantucket. Having a captain like Kurt, someone who could tell them when and where it might be beneficial to pull up their centre board and where to look out for lobster traps was extremely helpful. When we all left the EYC, everyone was in good humour and brimming with excitement for the parade!

Sadly, I Head To Chappaquiddick

I know, that sentence doesn’t even make sense. How could I possibly be sad about heading to Chappy? Chappy is one of my favourite places in the world! I go there all the time to swim her beaches, walk her trails, hang out with friends, and find peace in her parks. This time, I was a little heartbroken. I wanted to be aboard Tigress. I wanted to be aboard Tigress so badly! My friend Laurel Redington of MVYRadio was aboard for the first time and I had never been in a catboat parade before! This trip for which I had taken COVID tests and crossed international borders, I was not going to take part. 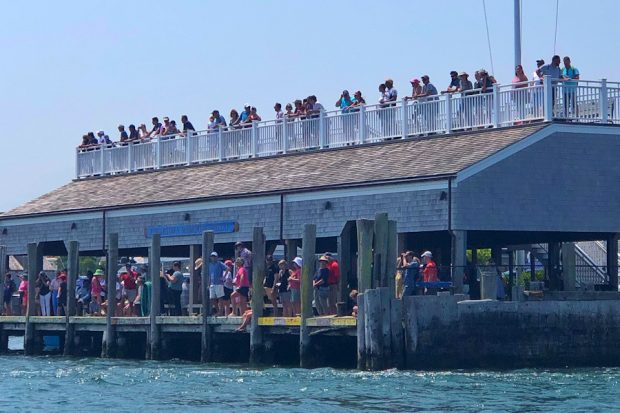 An excited crowd on Memorial Wharf!

I was, as they say, taking one for the team. I knew in my heart of hearts, that it would be better for Catboat Charters if I was on the beaches of Chappaquiddick taking photographs of the boats as they sailed by. I wasn’t going to be able to document anything from aboard Tigress. I can go sailing with Kurt another time. This was the only time I was going to be able to get photos like this.

I sat on the beach for a long time. I’m used to it. I have a spot that I like to stake out and wait for Tigress to go by. I usually have a lot of space and I can swim when I get too hot. That day, it seemed to take them an eternity to come around the corner of Chappy Beach and into my line of vision. I kept turning and straining my neck. Do I have time for one more swim? Should I put on sunscreen again? Will it make my hands too greasy to operate the camera? Then they came… 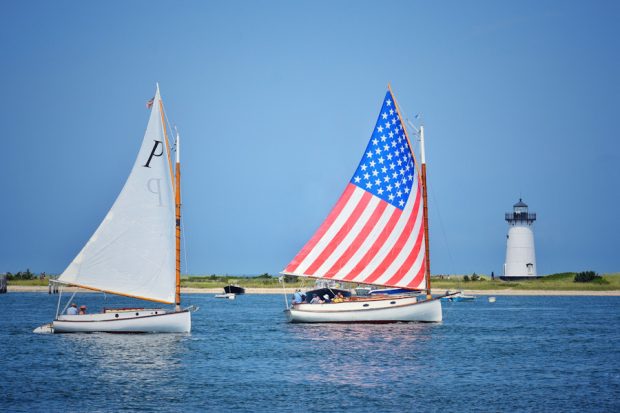 One by one, they came around the bend. Actually, from my vantage point, it looked like neck and neck Tigress and Pinkletink but that was alright with me! Pinkletink is Captain Kurt’s father’s—I call him ‘The Admiral’. If Kurt is the Captain then he has to be ‘The Admiral’ right? Makes sense, right?—boat. The idea of catching the two together in a single shot really made me happy. I forget who came around next. It might have been Mark in Sea Chantey or it might have been Old Sculpin and her crew. As soon as one of them came around, they all started filing in! It was quite a sight! 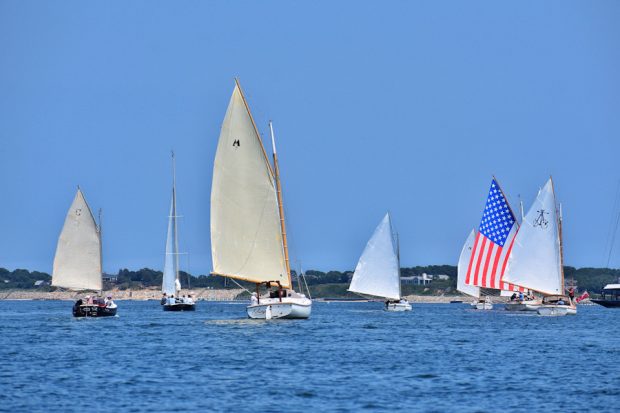 So many beautiful boats.

At that moment, I was happy to be exactly where I was. Would I still rather be aboard Tigress with my friends? Of course. For the record, that is where I would always choose to be. But there are far worse things than spending the afternoon on the beaches of Chappaquiddick taking pictures of the people you love going by on catboats. Just sayin’…

A Party Of The Heart On Edgartown Harbor

There were bacon wrapped lobster rolls at The Old Sculpin Gallery for all of us party-goers. I’m not even kidding. There were oysters on the half shell provided by Cottage City Oysters on the deck of the Norton Boathouse. Yeah, that’s right—still not kidding. I have to tell you something they were the best oysters that I have ever had by a long shot. They were from out in the ocean so they were nice and briney. Not to mention, when an oyster has been out of the ocean for about twenty minutes—that’s what it seems like on-island—you can tell. 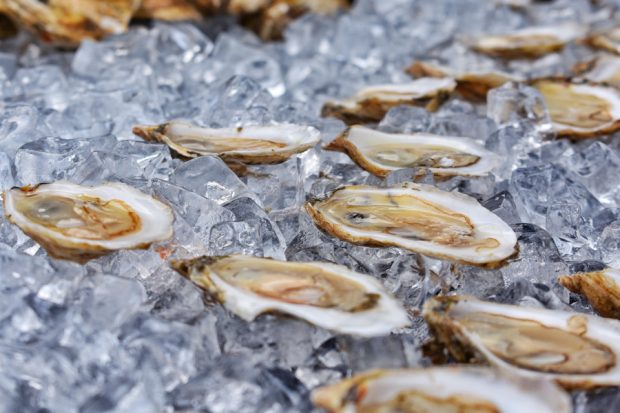 As the party was getting underway, I slipped inside and found a corner chair. There I sat and listened to three women being interviewed by the inimitable Laurel Redington. Laurel’s warmth and open spirit have a way of relaxing people into telling their stories. The stories of these three women, I wanted to hear. They were the granddaughters of Manuel Swartz Roberts. 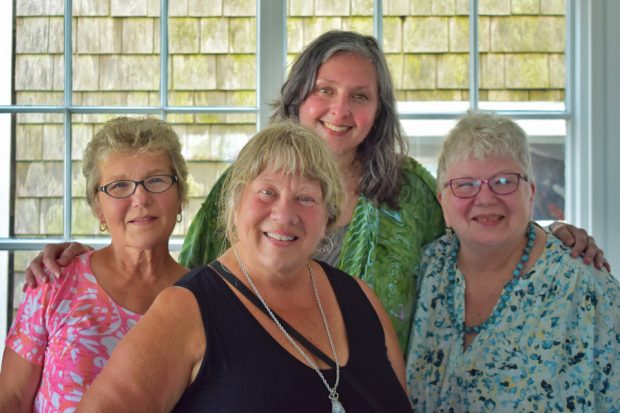 A moment in oral history

I love history. I love oral histories. Listening to people tell their stories of this island and the ancestors who have helped to shape her into the paradise that I see her as today is overwhelming to me. These three women shared stories of being at their ‘Grampy’s’ knee in his workshop. The workshop that now stands as Old Sculpin Gallery. I listened to them talk about how much this event meant to them and their family. How important it was that the work of their grandfather, the work he poured his heart into, was not only remembered but appreciated and respected still to this day.

Celebration Of Life On Martha’s Vineyard 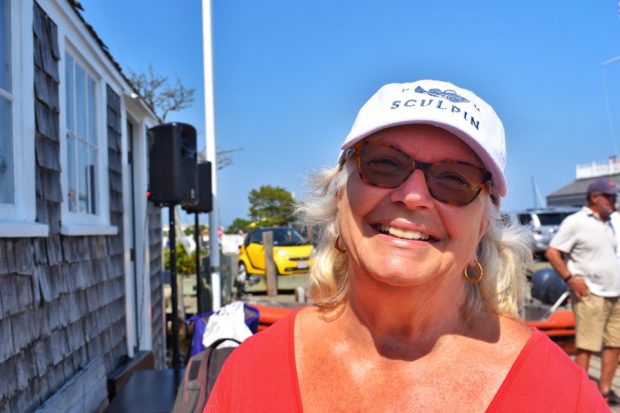 A big thanks to June Schoppe of Old Sculpin Gallery!

This summer is bringing people together like no other in recent history. Whether we realize it or not, we are coming together to celebrate life. There is a long list of people and companies to thank for making The ‘Catboats!’ exhibit happen. If I start now, I will lose my train of thought. I know you all made it happen for the same reasons we all attended. We all love this incredible island with all of our hearts. Hey, it’s the Vineyard!