A couple of weeks ago, I attended the Catboat Parade in Edgartown Harbor. It was a great event. Not only was the parade of sail magnificent and the art exhibit at Old Sculpin Gallery impressive, there was a great party afterward for all of the participants. That’s where I met Greg and Dan Martino of Cottage City Oysters. They had an oyster table at the event that they kept full of what I discovered to be the best oysters that I have ever had. I started talking to the brothers and asking questions about why their oysters were so flavourful. They said it was because they harvested them out in the ocean not in a bay like most oyster farms. Dan kept saying, “It’s the merrior!” and I didn’t have a clue what he meant. But I didn’t know anything about the oyster business at all. When Dan said that I should come out with them sometime, I jumped at the chance. 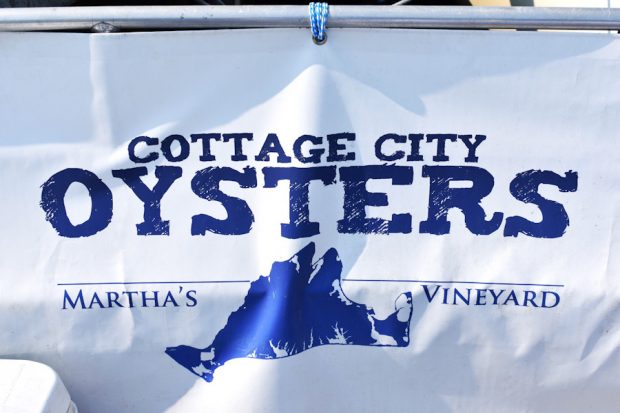 As you may or may not have surmised, Cottage City Oysters docks and picks up their clients in Oak Bluffs. For those of you who did not assume that to be true, I will let you in on a little island history. The area currently known as Oak Bluffs was originally settled in 1642 as part of Edgartown; however, in 1880 it was officially incorporated as ‘Cottage City’ and remained under that name until the town re-incorporated as Oak Bluffs in 1907. The fact that Dan and Greg have used this grain of island history to grow their pearl of a business pleases me to no end. Even their vessel ‘Leeward’ which started as a military boat, then was used for bird research in Maine before being purchased by the Martinos seemed perfect for their purposes. 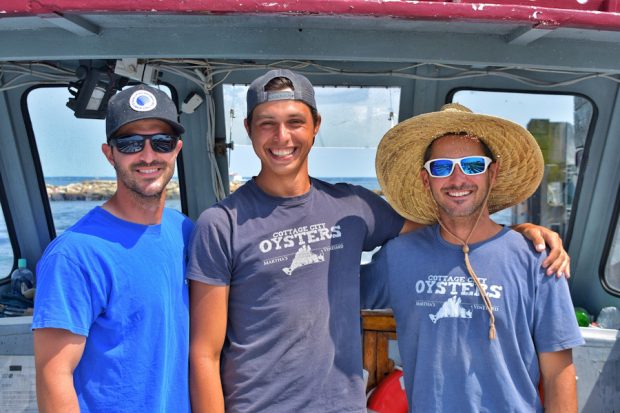 To say that I was unprepared for my oyster farm tour would be an understatement. What Greg and Dan have cultivated here is truly impressive. I went out expecting to go out on a boat—which is always fun—have a few laughs with fellow tourists—because no matter how hard I try not to be, I am still a tourist—eat some oysters, and go home. Everyone loves oysters right? They’re a delicacy! They’re fun to eat! The invitation said right on it: BYOB. We did all of that and had a great time but the tour was so much more. Cottage City Oysters is nothing short of ecotourism.

The world’s oceans cover almost two thirds of the planet and yet almost all of the news we hear about climate change is how it affects the atmosphere and the land animals that are losing their homes. We should hear about that. It’s appalling. Equally, if not more important, is that the human race is pumping carbon dioxide emissions into the atmosphere and almost a third of it is being absorbed by the earth’s oceans. Like a filtration system in a fish tank, much of the carbon dioxide is absorbed by plants like seaweed; however, all of the carbon dioxide that is not absorbed into the plant life dissolves into the seawater itself thereby altering the chemistry of the ocean. This is referred to as “ocean acidification”. Why am I telling you this? Because Dan Martino told me—that’s why. Why did Dan tell me? Because oysters are playing a really cool role in the cleansing of our oceans. Check it out… 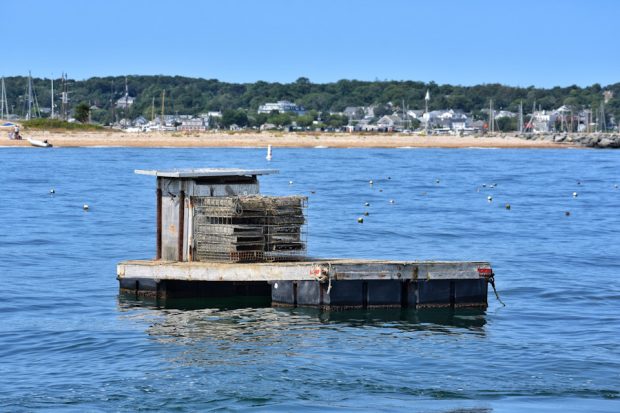 In order to be approved for their farm, Dan and Greg first had to prove to the government that the area they proposed to harvest was—for lack of a better word—useless. At least useless to everyone and everything else. They had to show that no other marine life was living there—they weren’t kicking any lobsters or crabs out of their natural habitat for example—or that any other fishermen were using it, or that any sea plants were growing there. In other words, the government wants to make sure that when you begin oyster farming, you are not trampling on anyone else’s toes and you are being the most beneficial to the environment that you possibly can be. Here’s why… 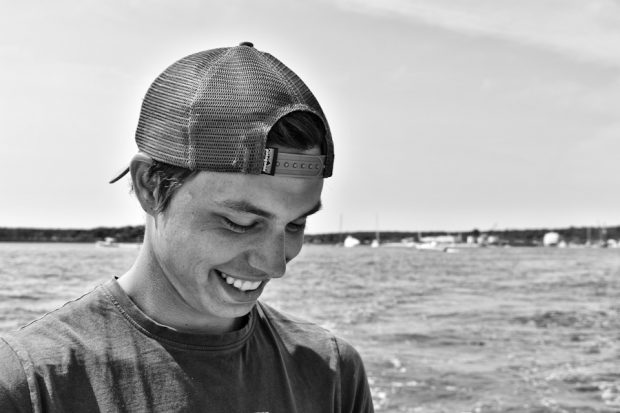 Liam Cosgrove teaching me to shuck.

Building an oyster farm creates life and not just for oysters. Oyster beds create an entire ecosystem. The structure of the oyster beds provides a habitat for a myriad of sea life such as crabs, lobster, eels, worms, juvenile fish and more. The oysters themselves act as a natural filter. A single oyster can filter up to 50 gallons of sea water per day and Dan and Greg have approximately 1.5 million oysters in their farm! What began as a flat bed of sand (remember Horse With No Name? “The ocean is a desert with its life underground and the perfect disguise above”) is slowly being developed into a viable healthy environment thanks to Cottage City Oysters. My mind was blown.

What The Shuck Is Merroir?

Dan Martino cracks me up. He is as dynamic a host as you are likely to find. When I asked him about the flavour of his incredible oysters back at the catboat parade, he told me it was because they were farmed in the open ocean. “It’s the merroir!” he said dramatically with a wave of his hand and a flash of island smile. I thought it was probably a fishing term with which I was not familiar. Lord knows, being a landlubber largely surrounded by sailors and fishermen, this was not an uncommon occurrence for me. I looked it up when I got home. 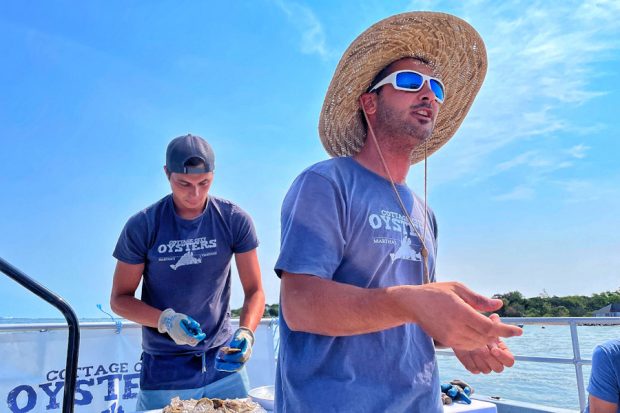 “It’s the merroir!” said Dan while Liam shucked in the background.

Merroir: The complete set of local conditions in which seafood is raised.

I should have figured that out on my own. ‘Mer’ is French for ‘sea’ and the French word ‘terroir’ refers to the environmental factors that effect the cultivation of wine. So, essentially what Dan was saying about being raised deep in the open ocean where it is clean, salty, and cold is right. All of those conditions combine to create a small, briny oyster that is absolutely delicious.

Dan and Greg were not the only hosts on our tour. The Martino brothers have had Liam working with them for three years. While Greg captained the Leeward, and Dan acted as cruise director, Liam was busy at the stern preparing our feast of Cottage City Oysters! Liam set up our trays, dished out our condiments, and shucked, and shucked, and shucked. After we ate a fair number of oysters, Liam also invited anyone who was game to come up and try their own hand at shucking. I’m just going to say it—I shucked. I’m sure that there have been many worse than I was but I’m not going to make valedictorian of the oyster shucking class unless they choose by height. 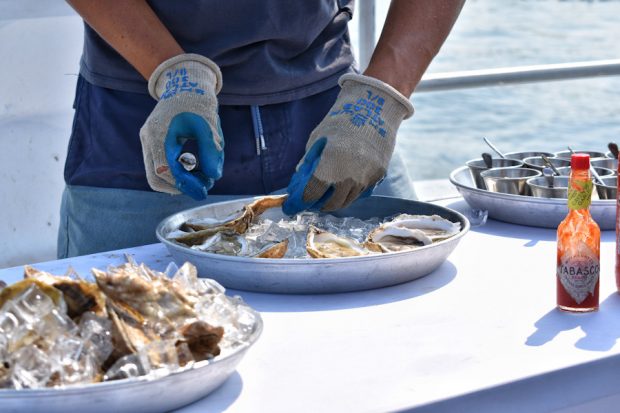 The shucking was fun and I know I would get better with a few more tries but I have to tell you that my mind was still reeling with all of the information I had just received. Working alongside Woods Hole Oceanographic Institute, studying the effects of their farm, and taking all that they have learned to local kids at summer camps and local schools is a big part of where Cottage City sees themselves going in the future. They see a future of giving back to the planet and giving back to their own community. Dan and Greg feel very good about going to work every day and so they should. 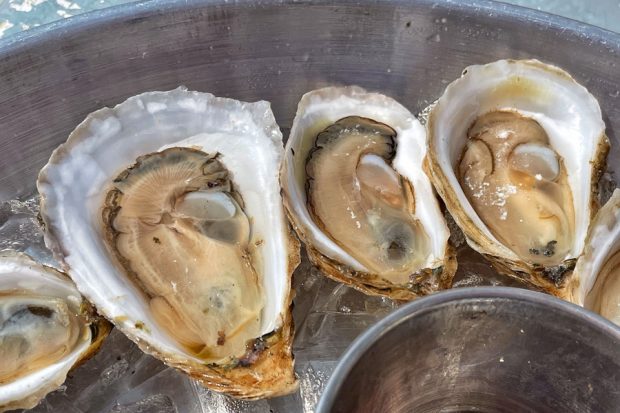 Without a doubt the best oysters I’ve ever had.

I was impressed to learn that Liam is already planning to open an oyster farm of his own. Not only was I impressed with Liam and with what he’s been able to achieve so far, I was also impressed by Dan and Greg. A lot of people might feel threatened about training someone to come up into their own field but not Dan and Greg. When I thought about it though—it all made sense. 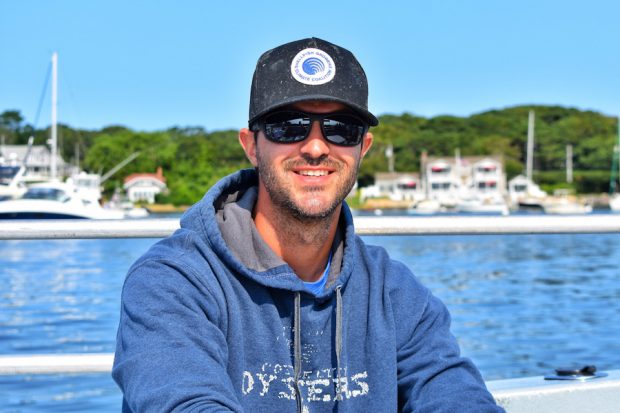 Cottage City Oysters is giving back to the planet on a pretty impressive scale. They’re also giving back to their own Martha’s Vineyard community. Dan and Greg are doing everything they can to give back to Liam so that he can go out on his own. It all fits together. Liam and I talked a lot on our tour. We talked about the community on the island and how truly special it is. The island is covered with incredible beaches and surrounded by delicious seafood but what makes it stand out from any other place that I have ever known is its people. When you go to Martha’s Vineyard, you either get it or you don’t. If you get it, it becomes a part of you. Cottage City Oysters gets it.

For two boys from Texas, they are Martha’s Vineyard through and through. With their first-responder backgrounds and their passion for the environment, it really isn’t all that surprising that the Martinos’ paths led them where they are today. There are a lot of things to do on this island but a lot of them you can do anywhere. Taking a tour with Cottage City Oysters is a singular island experience. I cannot recommend it enough.