That shark. I don’t remember when that shark wasn’t a part of my life. Oh, I’ve seen photos of a small child holding a stuffed puppy or a stuffed bunny and I know that those photos were taken in a world where twenty-five foot long monster sharks made out of fibreglass, metal, and pneumatic tubing didn’t exist, but I don’t remember it. In my mind, that shark has always been there. Sharks have always been there. Martha’s Vineyard came some time later. Bruce the shark started it all. He started this website.

In the beginning, I caught glimpses of him on TV commercials. His fin cut through the open water that almost seemed to slop out of my family television, advertising a movie that I wasn’t allowed to see. I was fascinated. I was terrified. I was obsessed. So, I read the book.

Every morning that I could, I pulled the book off the shelf and dived into Peter Benchley’s murky waters. The opening sentence, “The great fish moved silently through the night water propelled by short sweeps of its crescent tail.” had me hooked. My five-year-old brain imagined every sleek scale. I saw the black eyes. Every bite had me hungry for more. Halfway through the book, my parents caught me. The jig was up. My mother said, “I don’t think I want him reading that book.” to which my father responded, “He’s FIVE and he’s reading JAWS!” That was the end of the argument and I was allowed to read pretty much anything that I wanted…and I did. 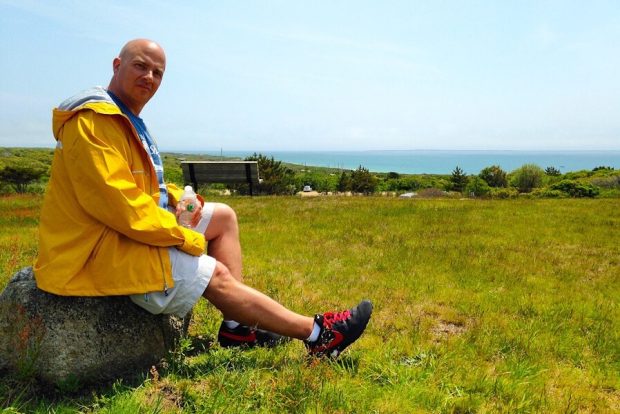 Crispin on Hooper’s Rock in Aquinnah

I read everything. I read a lot of mysteries—Sir Arthur Conan Doyle and Agatha Christie were my favourites. Stephen King was high on my list. Jackie Collins was a big hit in my teen years. There you have it. From those four, I learned mystery, horror, and storytelling. Most of all, I learned that I wanted to be a writer more than anything else.

Eventually, I did see JAWS. Well, almost half of it. There was a big announcement that JAWS was going to be on TV. I was beside myself with excitement. My parents knew that this was something that had to happen. They warned me that my cousin still had nightmares from seeing it in the theatre. Nothing could stop me. I grabbed my pillow and blanket from my bed and hunkered down. 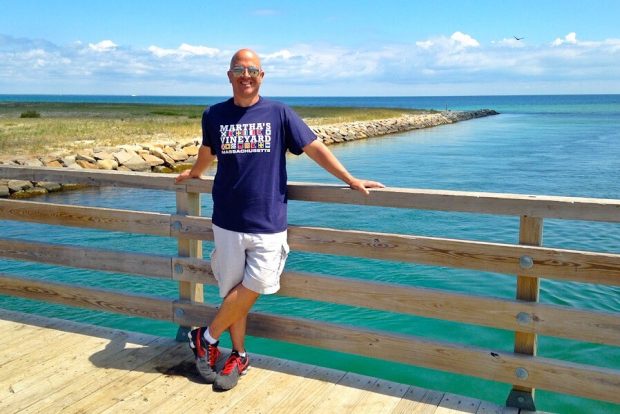 Crispin on The JAWS Bridge

The opening scene was a lot to take in, but I made it through. Then Alex Kintner was consumed. That was really scary, but I saw a flash of the shark! It was just tail and dorsal fin, but I saw it! I was scared, but I could continue. There had to be a scene coming up that showed the whole shark and I was ready. Then, Ben Gardner’s head popped out of the bottom of his boat…underwater…at night…right in Hooper’s face. That was it. I couldn’t take any more. I elected to go to bed. I had nightmares.

It would take two more tries before I finally made it all the way through. I loved it. Bruce was beautiful. Then Dad and I made the trip (read the post “Don’t Tell Your Mother!“) to the Vineyard. I, literally, walked into Amity Island. That was it. I was hooked. Even now, forty years later, I’m sitting here writing to you surrounded by JAWS paraphernalia. As of this writing, I have written four mystery thrillers that take place on the island and I’m well into my fifth. My friends are, for the most part, Islanders. My spiritual home is Martha’s Vineyard. All because of that shark. Not just sharks—that shark.