This post has been a long time coming. I think if you do some soul searching, you will realize that you were expecting it, waiting for it, maybe even anticipating it? I have danced around it in several different posts. In Welcome To Amity, I talked about just how little Martha’s Vineyard has changed since the filming of JAWS. In my ‘bio‘—which isn’t really a bio at all, but more of  tribute to that twenty-five-foot mechanical fish—I talk about how my passion for JAWS and Martha’s Vineyard are tightly woven into an unbreakable cuttyhunk. Of course, JAWS rises from the depths, at the very least in conversation, in all of my Martha’s Vineyard Mysteries. So, now, I think it’s about time that I go over the JAWS filming locations.

Well, that’s a good question, but the only real answer is—that depends. There are certain places that we can rule out right off the bat. The opening credits are the shark’s P.O.V. of seaweed on the ocean floor. That was filmed in the pacific, off the coast of California. If you have spent anytime in the Atlantic Ocean, you know full well, while it is a beautiful place to be and I highly recommend it, it’s far too murky to film a shot as clear as that one. 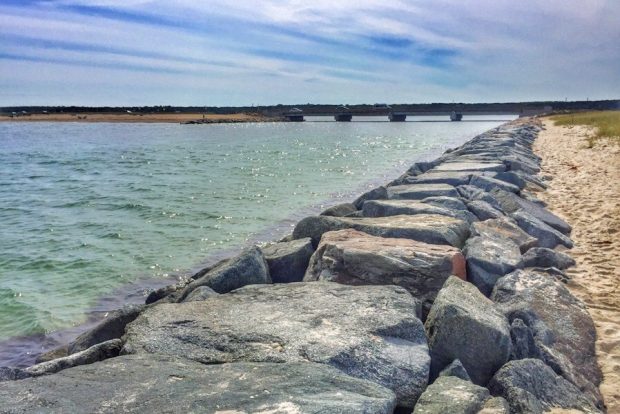 Also, let’s not forget the Hooper in a cage scene. That, too, was filmed in California, but in a tank at Universal Studios. Unless, we see a real shark. If we see a real shark, we’re in Australia. God, this is so complicated! Is it any wonder the movie won for best editing? The only other underwater scene I think I need to mention is when Hooper goes underwater to check the hull of Ben Gardner’s boat. Remember? Brody and Hooper go out on the water looking for the shark in the middle of the night (of course, they do) and they find this half-sunk boat that looks like it has been through the war. Except, we know that’s not what happened. There’s a huge bite out of the wall of the cockpit for crying out loud.

Anyway, Hooper decides that being out on a boat in the middle of the night, looking for a shark that has already eaten two people and a dog, is the perfect time to go swimming (of course, he does). Turns out that it wasn’t such a brave move after all, because the above water shots were filmed on the back lot at Universal and the underwater scenes were filmed in Verna (JAWS film editor) Fields’ swimming pool. That’s a much lower risk. Although, I still don’t want heads popping out at me when I’m underwater. I just don’t.

Then, Where Is Amity?

JAWS starts with a campfire scene and that is set on South Beach. It’s easy to find, it’s right at the entrance to the beach. Then, Chrissie runs away from the group to go swimming and things begin to get tricky again. Chrissie is chilling on South Beach with her friends and then runs away across the dunes, with her friend Cassidy in tow, throws off her clothes and runs into the refreshing waters of Bend-In-The-Road Beach.

Even if Chrissie was in amazing shape (If I remember correctly, she was), she would have to leave her friends, run across Katama, through Edgartown Village, up Main Street to Beach Road, to get to Bend In The Road Beach. It would take her an hour. Oh! And yes, you guessed it, when we are looking up at her “ay chihuahua!” from the shark’s P.O.V., we’re back in California. 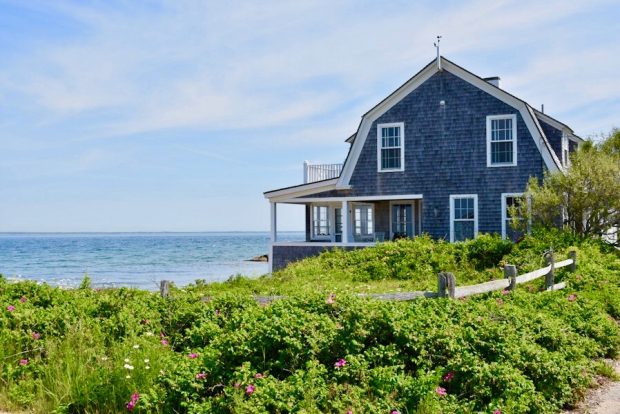 Brody’s house is next and it is on East Chop. The original house has been demolished and an entirely new house built in its stead, but the garage is still there. It has been converted into a guest house. From home, Brody drives to work, passes the Gay Head Lighthouse, to his office in Edgartown. That’s right—Oak Bluffs to Edgartown via Aquinnah. Talk about hating to go to work… 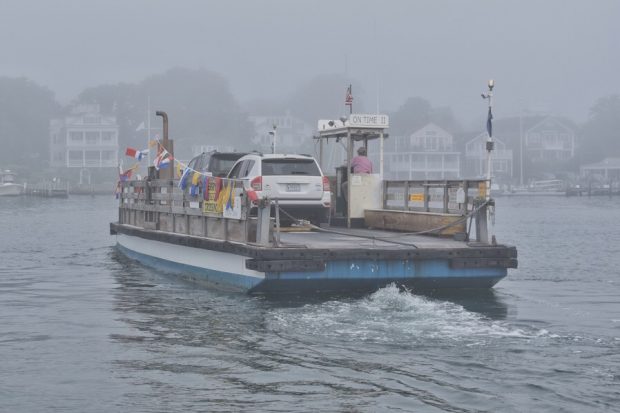 The ‘Amity’ On Time

Then we’re in Amity Township? Which is, of course, Edgartown Village. Brody walks down South Water Street and up Main Street. Very little has changed, and I love it. Then he heads on over to the Chappy Ferry—Amity On Time—to save the boy scouts swimming in April Bay for their merit badges—no really! 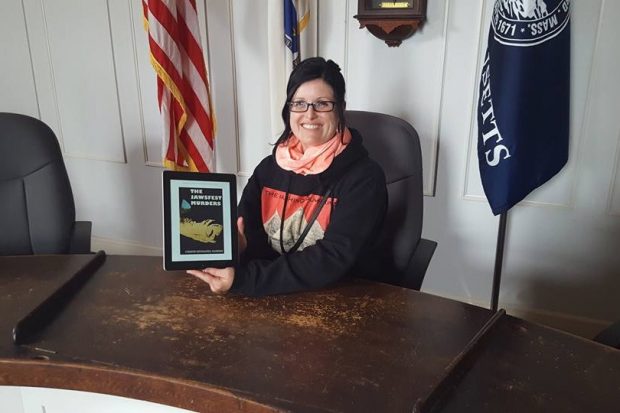 We then head on over to State Beach. I touched on this before. Alex Kintner gets chomped here. Then we’re right back in Edgartown, to the town hall no less, for a town meeting and Quint’s intro. They close the beaches (only for twenty four hours but that will still feel like three weeks) and then we head to Harthaven. Harthaven is a small part of Oak Bluffs on Beach Road and thereabouts. It also happens to be the last of the JAWS filming locations that I visited myself. This is where the two old fishermen try to catch the shark with a holiday roast. The dock gets torn apart and Charlie ends up in the water with the shark. This is commonly referred to among JAWS fans as “the tear-away dock”. The filming location is actually a private beach just north of the small bridge. 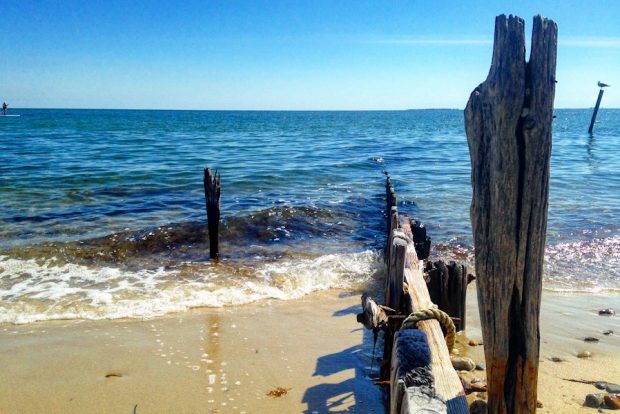 The remains of the ‘Tear-Away Dock’ in Harthaven

Then we’re back in Edgartown at the Harbor Master, where Brody gets the slap of his life, and then back to Brody’s house. That’s when Hooper and Brody go shark hunting in the middle of the night. When Hooper finds Ben Gardner, or Gardner finds Hooper, and Hooper discovers the shark tooth the size of a shot glass, they decide to appeal to the Mayor to hire Quint. This all happens at the Gay Head Lighthouse and a billboard which they were only allowed to erect if they would take it down the same day. It was still wet when they filmed that scene. 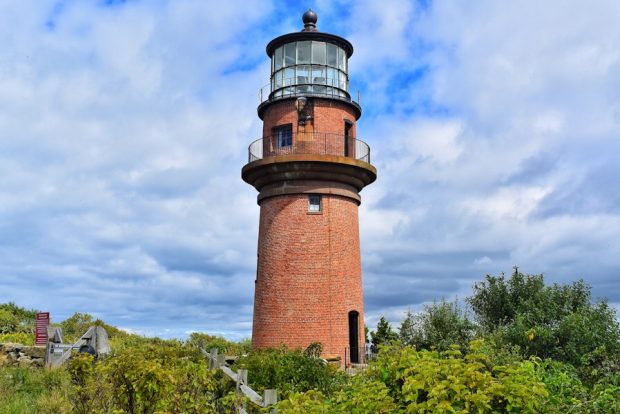 The perfect place to confront a mayor.

Yay! It’s the fourth of July! We open on the Vineyard Haven ferry terminal and five corners. I love this part because I love the music and there is one shot where you can see the East Chop Lighthouse and it is still the chocolate lighthouse of my childhood memories. You can actually see all five lighthouses in JAWS. Did you know that? Don’t blink. Then we’re back on State Beach and the JAWS Bridge. The shark swims under the JAWS Bridge (this is really why people call it that) and eats the dude in the red rowboat. The dude actually doesn’t get eaten here but I’ll get to that later—bear with me. Oh, and the leg floating through the clear, blue water? That’s right, California. 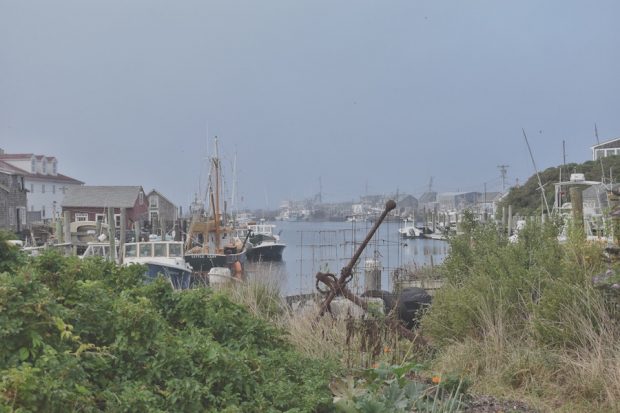 The lot where Quint’s shack once stood in Menemsha

Quint’s shack is next. I love Quint’s shack just like every JAWS fan. It’s no longer standing either. Again, put it up and tear it down. They even had to replace to the garbage they disturbed—I’m not joking. They built Quint’s shack right at the end point of Menemsha Harbor. In fact, it’s right next to The Galley. If you sit on the deck at The Galley to eat your delicious fish sandwich or lobster roll, there are photos of Quint and Quint’s shack from the film. JAWS is everywhere! 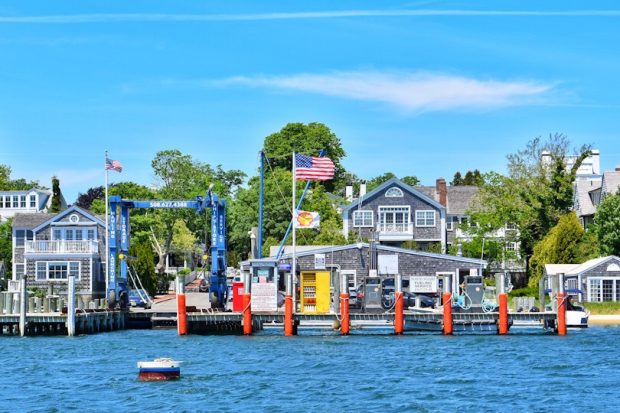 Then we head out to sea and we really do head out to sea. The stories are infamous. Boats going by in the distance, sharks not working. In fact, if a shark just swam past the boat it was shot out in the open ocean. However, more often than not, if a shark had to “interact” with a person, all of those shots were filmed in Katama Bay. In the bay, the current wasn’t as strong.

This made the sharks a lot more manageable. So, if a shark had to eat a dude in a red rowboat (see? I told you to bare with me), or eat Quint, or fight with Brody and eat his boat, it was all filmed in Katama Bay. This brings us to the end of our film and the last of the JAWS filming locations. As I mentioned in my blog post about Cape Poge Wildlife Reservation, Hooper and Brody swim up on the beach at Cape Poge Lighthouse on Chappaquiddick. 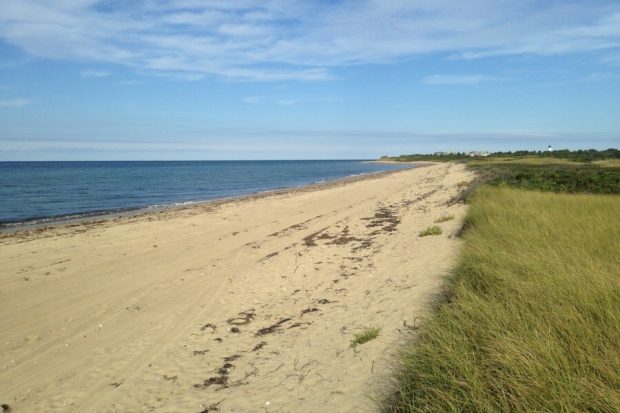 I thought for sure I wasn’t going to get all of the JAWS filming locations into this post, but I think I did. Edgartown is probably the true heart of Amity. Most of the movie was filmed there when they were on dry land. So, Where is Amity? Edgartown with a bit of Menemsha thrown in for good measure. If I have forgotten anything that you have always wondered about, please leave your questions in the comment field below. This post was a fun post to write. I hope you enjoyed it. Homegrown Tours does a fantastic, fun, and comprehensive JAWS filming locations tour on the island. I highly recommend it! Like the documentary says, The Shark Is Still Working.