The first time I was up the hill overlooking Lagoon Pond and Vineyard Haven Harbor, I was taking pictures of the old dilapidated Marine Hospital. The hospital was beautiful in its own right, but in that sad and lonely way. The way that you would expect an abandoned hospital overlooking the ocean to be. Adding to the beauty and the atmosphere, it was a grey April day. The clouds were heavy and the colours of the island washed out. That’s why I was there though. I wanted to capture some of the history I was sure still existed within those empty rooms. Ghost stories about a nurse on the second story balcony had piqued my interest. I was definitely hoping to catch a glimpse. She didn’t come. I left, content with my photos and the hopes that Martha’s Vineyard would salvage the building before it was too late. They have and they have done an incredible job. Martha’s Vineyard Museum is a great addition to my favourite island. 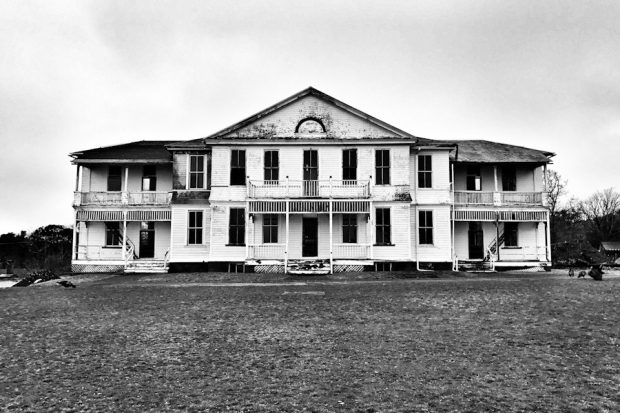 The hospital, when we were introduced. 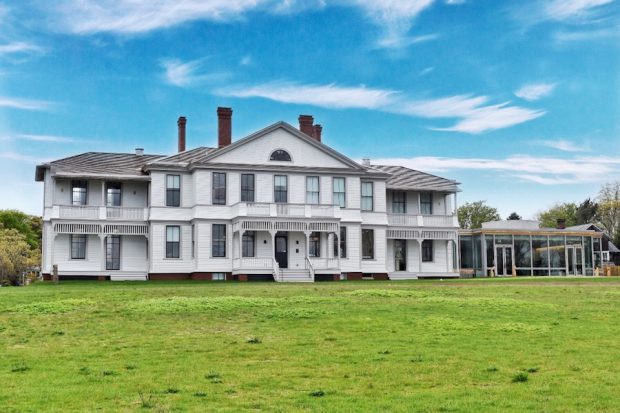 I should probably start by saying—I love a museum. I really do. When I think back to younger me, school me, I can’t fathom my utter foolish dismissal of history as boring. I’m fascinated by every aspect of history, let alone history of my favourite place in the world. But before we get into the artifacts and displays housed inside the museum itself, it should be noted that they did an astonishing job resurrecting the actual building. It’s immaculate. There is no question in my mind that this beautiful gleaming white and rich wood structure has never looked better. 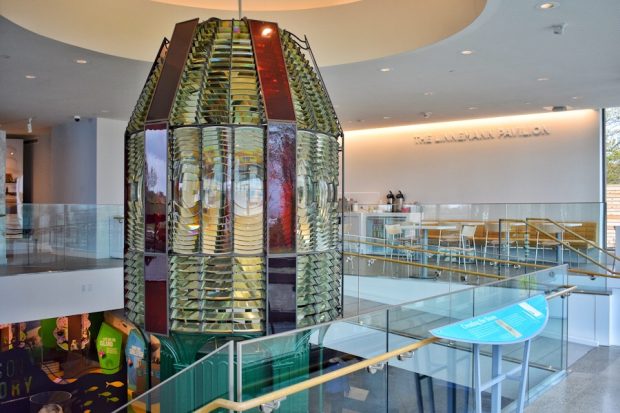 The addition on the west wing is entirely made of glass. Amongst other things, it houses the Gay Head Lighthouse’s Fresnel Lens and the museum  café. When I first arrived, I was quite hungry so I headed there first. I picked up a middle-eastern cous-cous salad, a coffee, and some Nutter-Butters (don’t judge me). I sat in the café and looked out over the lagoon and the harbour. The museum has done an excellent job of introducing its patrons to the old while wrapping them in the island’s present.

I enjoyed the entire museum, no question, but my favourite part was definitely the part pertaining to the Gay Head Light. One of my most recent posts was about the amazing history of the Gay Head Light and I was thrilled to see so many of the artifacts I had written about, first-hand. I had just written about the spider lamps that were first used to light the lamps back in 1799. I had imagined how they looked as I wrote about the lighthouse keepers burning their eyes on them. Now, there was one in front of me! 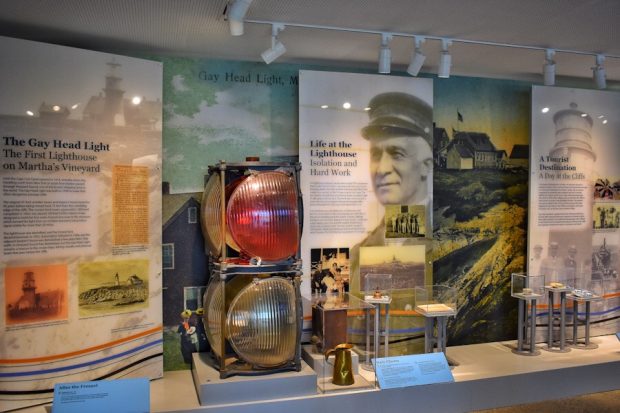 A portion of the Gay Head Lighthouse exhibit

I had written about the horrifying New England Maritime disaster, the shipwreck of City Of Columbus. Shipwrecks have always fascinated me—I don’t think I’m alone in this if Titanic’s grosses at the theatre are any indication—and I was enthralled as I wrote about the Columbus’s crew of 126 slipping into the frigid water, only to have 24 rescued by the brave Wampanoags. All of the women and children were lost. Now, a foot in front of me was a door from the ship, a bench from the ship, and the ship’s bell. There is also a rather powerful drawing of the ship hitting Devil’s Bridge. I had spent a lot of time reading and researching this disaster. Having these pieces in front of me was emotional and humbling. 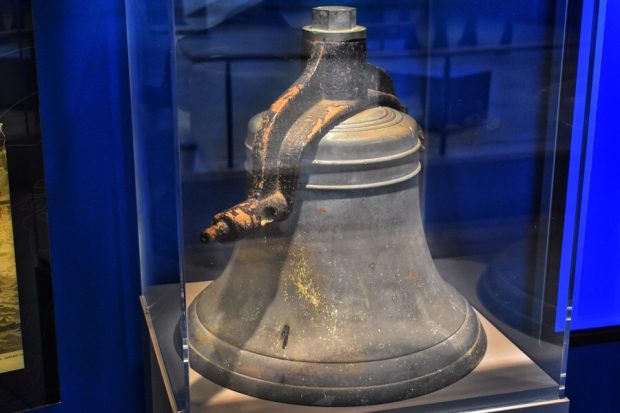 The bell from The City Of Columbus

Taking centre stage of the Gay Head Lighthouse exhibit, possibly the entire museum, is the First-Order Fresnel Lens. The Fresnel Lens was revolutionary in its day. It stands over twelve feet tall and weighs several tonnes. It was first lit in December of 1856. The lighthouse keepers were required to wind its works every four hours. The engineering of the glass is impressive. With precise cuts made in the convex side of one enormous lens, they were able to create the same effect of having several glass lenses placed at different angles but at a fraction of the weight. The light could be seen for miles.

There are different areas of the museum dedicated to different sections of the island’s history. There are a lot of interactive displays which are really well done. There was one pertaining to weather that was interesting, even if it did bring back unpleasant memories of being on-island for Hurricane José. There is a whole interactive room designed for kids, which is great. I must admit, I didn’t go in it. After The City Of Columbus, I headed upstairs to see what was going on in the rooms I had missed when I headed to the café. 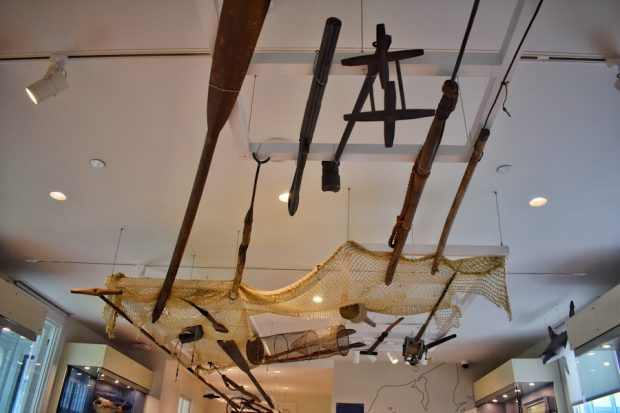 Naturally, the whaling exhibit was impressive. I think everyone would expect that as whaling is such a big part of the island. The ceiling is lined with original harpoons, nets, and spears from the era. With a history as rich as the island’s, no space is left bare! What I liked even more was the attention to quirky characters who had lived on the island and made a Martha’s Vineyard kind of impact. One of my favourites is Nancy Luce, “The Chicken Lady“, of West Tisbury. It was those kind of exhibits that helped to make the museum really special for me. 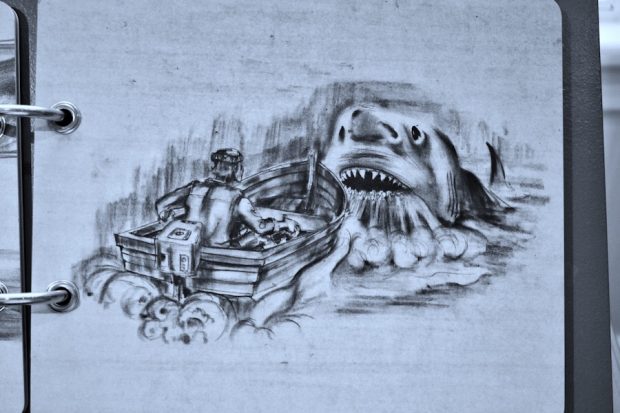 Of course there was a nod to JAWS. In my opinion, not a significant enough of a nod. Now, I know what you’re all thinking. Will there ever be enough JAWS for me? That’s fair. Probably not. All they had though was one book of some of Joe Alves’ storyboards. That’s it. The impact of JAWS on Martha’s Vineyard really cannot be understated. All you need to do is walk through the townships and see just how many stores sell something that nods to the epic film. I mean, at least one of the movie houses shows JAWS once a week all summer, every summer. That has to tell you something. There is an enormous JAWS exhibit in the Catalina Museum. Personally, I think it should be in the Martha’s Vineyard Museum, on the island that started it all…okay, I’m done. 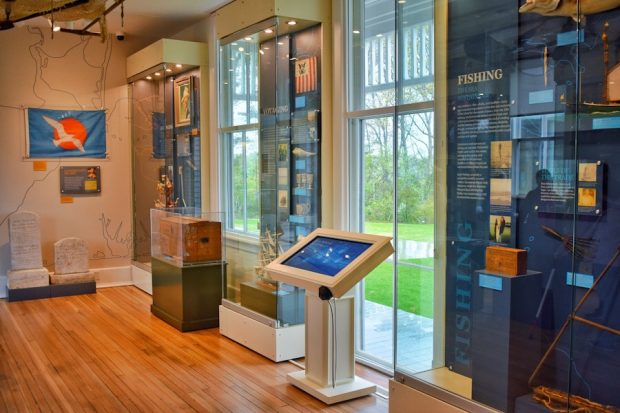 One of the many exhibition rooms.

Like every good museum, once is not enough. There will be another trip to the Martha’s Vineyard Museum when I head back to the island in June. There was a lot to soak in. In fact, there was a whole third floor that I didn’t even attempt! The section about the history of creation and art on the Vineyard could certainly bear closer inspection, and in June, the patio will be open. Sitting on that hill, overlooking the Atlantic Ocean, with a good cup of coffee will be a lovely pause in my day.

I hope you all have a wonderful holiday Monday! #M