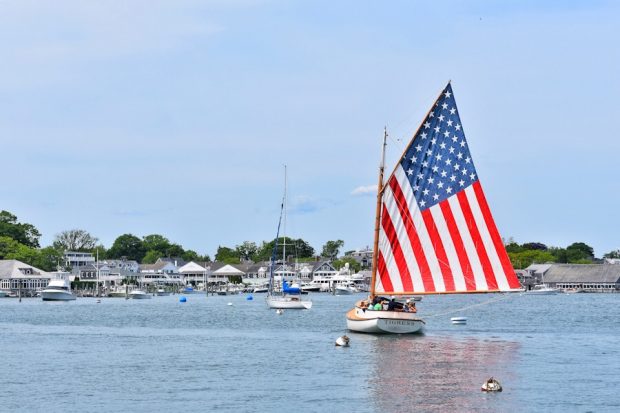 To begin with, Stepping aboard Tigress, the perfectly maintained, ninety-two-year-old catboat, is a step back in time. She is a history lesson. A lesson that Captain Kurt Peterson is all too eager to teach. Beaming with well-earned pride and an almost child-like excitement, Captain Kurt hoists his American Flag sail and tells his guests about the history of his much-loved vessel. Wooden catboats are few and far between these days. They have long since been replaced by their fibreglass counterparts. Captain Kurt prefers the traditional wood. In fact, the more I got to know Kurt, the more I got the feeling that he is the reincarnate of an old sailor who lived more than a century ago. His deftness at sailing, his love of things old over the new, and the way he plays the guitar for his guests but only sings old songs—there could be no other explanation. Yes, when you board Tigress and take the welcoming hand of Captain Kurt, you are stepping back in time. 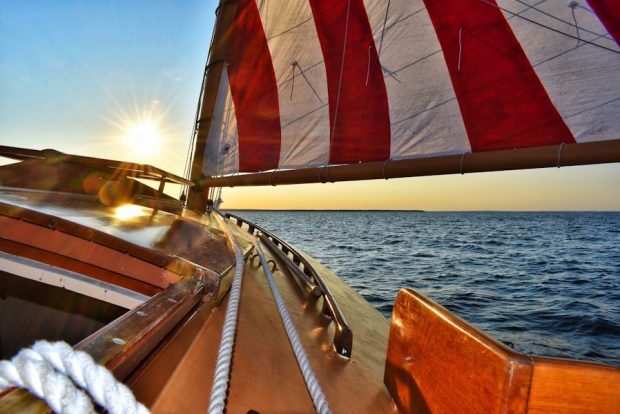 Then, we set sail into Edgartown Harbor. The harbor only served to suspend my disbelief. It doesn’t matter whether you opt for a sunset cruise or an afternoon sail, when Tigress steers you around the harbor, you are treated to a tour of yesteryear. Captain Kurt’s knowledge of structures like The Vose Family Boathouse that has been on Edgartown Harbor since the late eighteen hundreds fascinated me. How it has sustained the north eastern weather all this time, I’ll never know. The Edgartown Yacht Club was built not long after the Vose Boathouse in 1905. Tigress, The Boathouse, The Yacht Club, all seem to give each other a clandestine wink as we passed. These are old friends who have known each other for a very, very, long time. They are merely humouring us. Captain Kurt will also point out key places that were used in the filming of 1975’s JAWS, and celebrity homes, but it is obvious that these facts are the least interesting to the Captain. 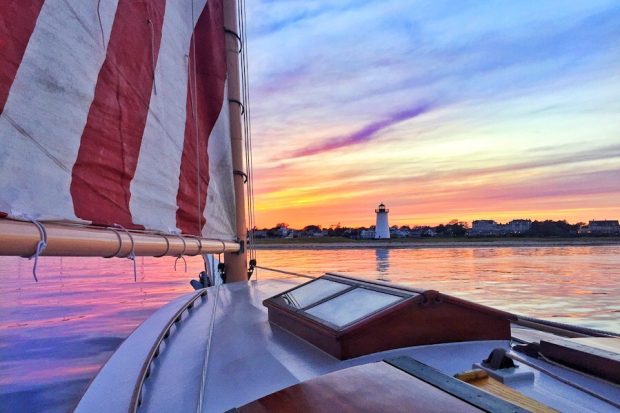 For the last half of our sail, we headed out to the outer harbor, past the Edgartown Lighthouse. Once we were out by Cape Poge, Chappaquiddick, we just drifted in the marine quiet. The buoys clanged. The sky stood at attention in purples, pinks, and oranges—an impossibly colourful salute to Tigress’s Stars and Stripes. Edgartown sunsets would be laughable anywhere, even on an artist’s canvas, except in broad strokes across the skies of Martha’s Vineyard. Captain Kurt and Tigress had to take me out, onto Vineyard Sound, for me to see it.

I love this strip. What’s not to like? Nancy’s