Last September, after a wedding on a cruise ship in Boston Harbor, I spent the night on The Cape with a couple of my closest friends. We had a great time, we listened to music, ordered pizza, talked and watched the sunset over a horizon of seawater, trees, and sailboats. It was a quiet night filled with good conversation; however, for me, it was a bit like Christmas Eve because the next morning, my buddy Ryan was sailing me back to Martha’s Vineyard! 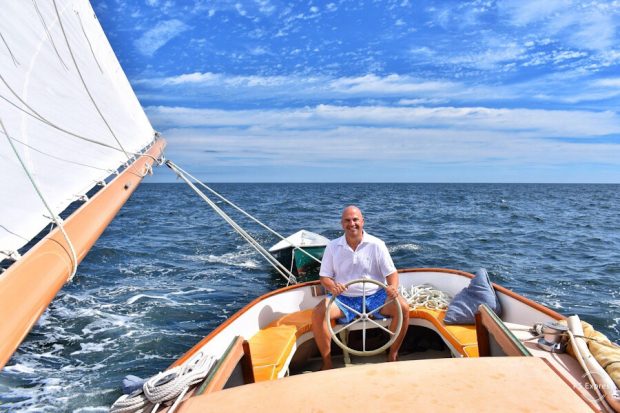 This was huge. Sailing from Cape Cod to Martha’s Vineyard had been on my to-do list for quite some time and I didn’t think it was going to happen for a while. Oh sure, one of my best friends divides his time between The Cape and Islands and owns a beautiful thirty-foot catboat—of course, I’m talking about Captain Kurt and Tigress of Catboat Charters—but that’s how he earns a living and when I’m down there he’s either working or the season is over and his boat is out of the water. Circumstances seemingly working against me, I wasn’t holding my breath for my epic sail from America to The Vineyard. That’s where my buddy Ryan comes in.

Ryan is Kurt’s brother and one cool cat. Over the summer of 2018, Ryan and I became quite good friends ourselves. It’s not hard to be friends with Ryan. If you’re a half-decent person, Ryan is going to like you, and you’d have to be considerably less than half-decent not to like Ryan. Ryan is one of those people who is always smiling. He is able to find the good in any situation. I work hard at being positive, I think it’s important. That is how we will make the world a better place—one smile and positive thought at a time. To Ryan, this seems to come naturally. 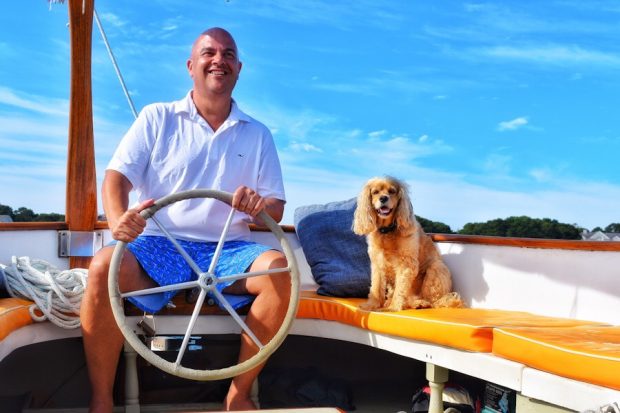 Bella hasn’t lost confidence in me yet.

I was talking to Ryan on the phone at some point over the summer about the wedding, trying to figure out the logistics. You see, I was going to go back to Ryan’s family’s place on The Cape after the wedding and spend the night, but because I don’t drive, I had to ask Ryan if he wouldn’t mind driving me to Woods Hole the next morning to catch the ferry. Of course, he agreed, but without pause, he said, “Of course, if the weather’s good, we could just sail over.”

My heart missed a beat. I felt like I should be rechecking my lottery numbers because there was no way I had read them right. “Pardon?” I asked. “Yeah, we could just sail over…If you want…” I was beside myself with excitement. Ryan and his family spend more time in boats than anyone I’ve ever met. In fact, if someone asked me if Ryan spent more time in a boat or on land, my money would be on a boat. That conversation was how I found myself up before the sun, making coffee, and sitting on the porch, waiting to embark for the Vineyard.

Ryan and I set sail with Bella The Cocker Spaniel late that morning. I loved having Bella with us, because then I could humour myself that I wasn’t the least qualified sailor on board. Ryan got us heading down the bay, and then asked me to take the wheel. Now, keep in mind, not only am I not a sailor, but I’m also not a driver. Steering large vehicles on land or water is a little out of my comfort zone. I continued to steer us out of the bay toward the opening onto Vineyard Sound—the open ocean. This I could handle and it was a lot of fun! I was puttering along at the helm of Genie (Ryan’s catboat) at a more than manageable speed. 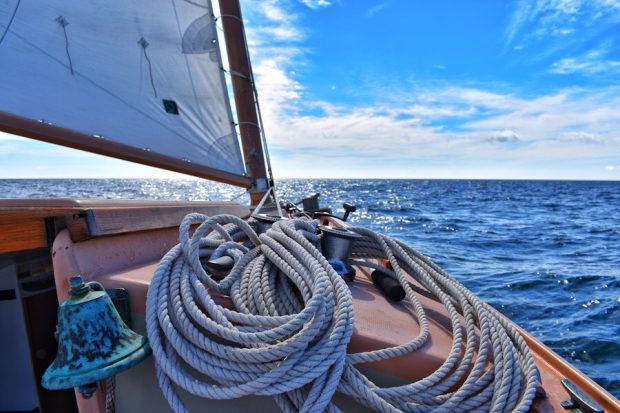 With Bella at my side, we were going slow enough that I was able to turn my head and take in the scenery, without driving us into a dock. Ryan filled me in on the history of the area. History is amazing and I love that part of the world. I soaked every bit of it in. When we hit the open water, I started to motion for my Captain to take over. “No,” he said. “You wanted to do this—you can do it. It’s the only way you’re going to learn.” I wasn’t sure if this was Ryan being grumpy or not; he’s always freaking smiling!

I was nervous—I was so nervous. Bella was really nervous—she hid under the bench! But as nervous as I was, I couldn’t have been more exhilarated! Being in a sailboat crossing the open ocean for the very first time was incredible enough, but to be at the helm? I really wanted to do a good job, but my brain was having a hard time keeping up. I was trying to absorb the mechanics of the entire process. 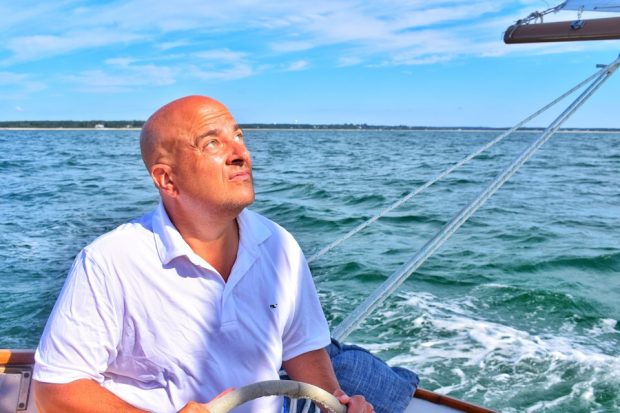 Because we had a headwind, our course wasn’t as straightforward as it otherwise might have been. In order to get where we wanted to go, we had to zig-zag the whole way to Martha’s Vineyard. If we had a tailwind, it would have blown us straight to the island. This creates a bit of a challenge and doubles our distance. To give you some idea, it ended up taking us five hours to sail from The Cape to The Vineyard, but it only took Ryan about two and a half hours to get home. 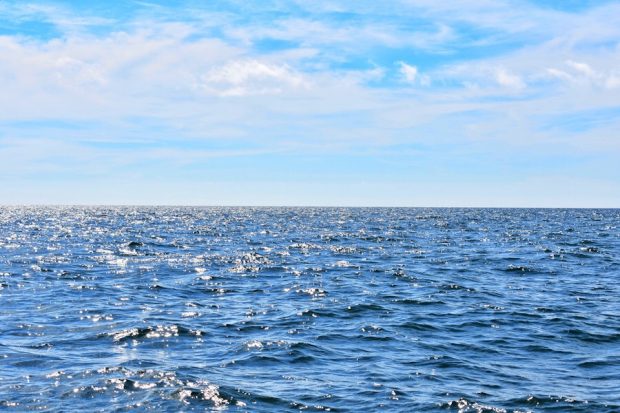 Being at sea in a small boat is profoundly affecting.

In order to create this zig-zag formation, we would sail to port until the sail started luffing, indicating that we were sailing to near the wind, and then we would turn (it’s called tacking) to starboard. We would follow this pattern all the way to the island. In the beginning, Ryan pointed me in the general direction, although I had already figured that out. I’m one of those people, you can plunk me down anywhere and I will always know which way is north. When we got a little closer, Ryan pointed out on the horizon and told me that was the Martha’s Vineyard water tower. I kept tacking, back and forth, but every time, I found that spot on the horizon and kept going. 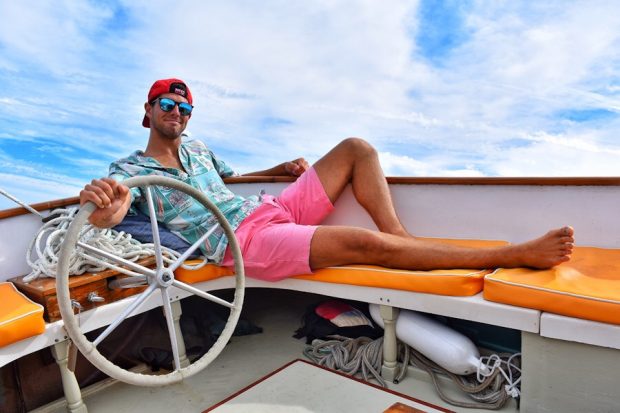 Ryan agreed to give me a break now and again.

The most challenging part was when we would just lose wind altogether! Literally! The air would just become stagnant. What could we do? We just stopped. Sure, we could have turned on the engine and found some wind, but both Ryan and I saw this as cheating. Besides, the day could not have been more perfect. I was sitting in a sailboat, halfway between Cape Cod and Martha’s Vineyard, with one of my favourite people. What kind of a hurry was I in? No hurry at all. I was amazed at how liberating being out on the open water really was. I have never experienced anything like it before or since. Eventually, wind did pick up and we were on our way again.

This sail was one of the highlights of my life and I couldn’t be more grateful to Ryan for making it all happen. Eventually, we sailed into Edgartown Harbor and Kurt met us on the deck of The Seafood Shanty for a lobster roll—the end to a perfect day. I have been out sailing quite a bit, but this was the first time I was out for such an extended period of time. It nailed me—I’m hooked. I absolutely love sailing. At one point during our sail, Ryan laughed and said, “How mad would you be if we missed Martha’s Vineyard altogether and I ended up taking you to Nantucket?” My buddy, Ryan, has a great many talents, but making threats is clearly not one of them.