The first time I rode the Flying Horses Carousel—actually, it was probably the first few times—I was not aware of its history or its significance in amusement park culture. All I knew was that my seven-year-old brain wanted to grab a gold ring. You see, that’s the deal. You get on a horse, and wait for the ride to lunge into forward movement. As you go round, there is a ring dispenser that dispenses metal rings. Most of the rings are silver in colour, but there are golden (brass) rings mixed in! If you manage to grab the brass ring, you win a free ride! That mixed with the loud carousel music (that has been playing on the same Wurlitzer organ since 1923), and the promise of fresh popcorn and/or candy floss, is enough to keep a child grinning for hours. 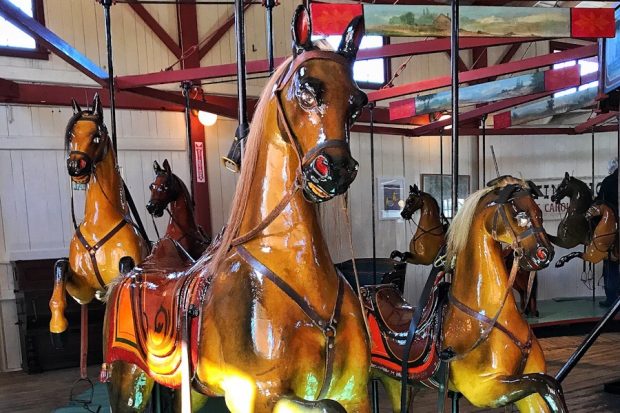 A few members of the carousel’s team.

As I said, when I was a child, I enjoyed the carousel as every child did, simply for what it was—a carousel. I didn’t give it any more thought than that. But there are more thoughts than that, a lot more. The date of The Flying Horses Carousel‘s  construction isn’t clear. There are blueprints and artwork for a carousel being built in the mid-eighteen-seventies. What we do know for sure is that F.O. Gordon purchased the carousel in New York City—where it had been used on Coney Island—in  1884 and moved it to Oak Bluffs. The original site of the carousel was closer to the Oak Bluffs Harbor until it was acquired by the town of Oak Bluffs and they moved to its present position at the base of Circuit Avenue. 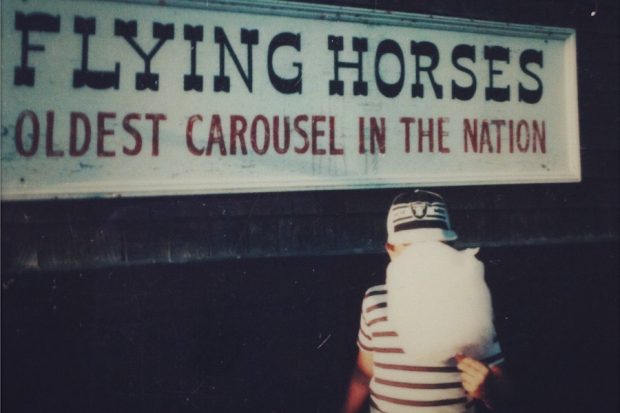 Me, the carousel, and candy floss bigger than my head.

The carousel went through a succession of owners over the next century. In 1986, it came into the possession of  Martha’s Vineyard Land Trust, and was declared a National Historic Landmark. It had already been listed on the National Register of Historic Places in 1979, but I’m not sure if one cancels the other out or if it continues to list them both. It’s a beautiful building and considering the constant wear and tear from children and the elements, the Trust has done an incredible job of maintaining it.

On a triangle of land created by Oak Bluffs Ave, Lake Ave, and Circuit Ave, stands The Flying Horses Carousel, America’s oldest functioning platform carousel. Its wood shingles are painted a rich red and it is all housed under a circular, gabled roof. I never really understood why it was called The Flying Horses as all of the horses are fixed. The name Flying Horses makes me think of the carousels where the horses bob up and down when the carousel is in motion, but no matter. The stationary horses must make it considerably less dangerous for the children when they are reaching for their brass ring. I suppose that it is possible that the mechanisms were not available yet to make a horse carousel bob up and down in the 1870’s—but I’m just guessing. 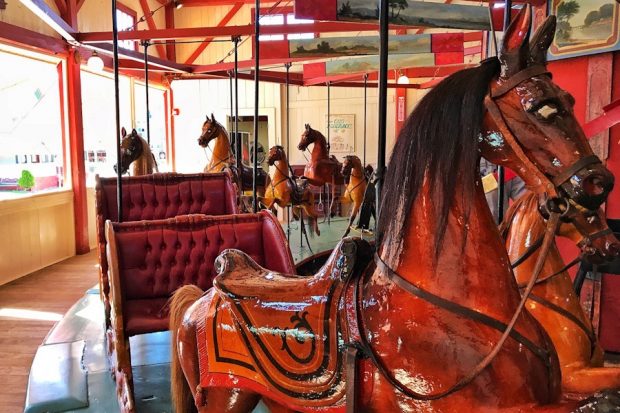 There are horses and chariots on the carousel.

The carousel is a twice repeating sequence of one chariot, two pairs of horses, one chariot, three pairs of horses. The manes on the horses were originally horsehair but have since been replaced. The original artwork eventually deteriorated as well. It was replaced by artwork depicting Martha’s Vineyard scenes by local artists, which I think is really cool. The other big change is of course the engine that propels it. The carousel was originally run on steam but changed over to electricity in 1900. The engine was rehabilitated in 1980. 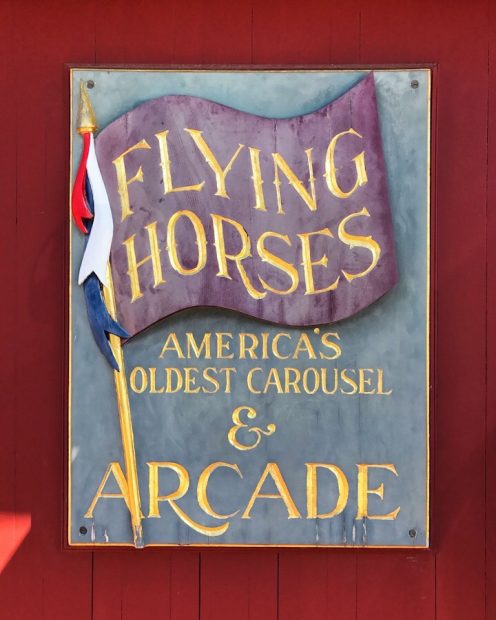 All of this is interesting. As I have written on this site, many, many times—I love history. I think its important. However what is really important, is the screaming, uproarious laughter of the children all through the season. I still grin from ear to ear when I pass the building. I grin in part from all of the positive energy pouring out from behind those red walls, and partly because I remember my own laughter, and the excitement I felt, when I got my first brass ring.