I have touched on a few things to do in Aquinnah in a couple of other posts. Of course, Aquinnah features largely in my third Martha’s Vineyard Mystery, White Shark. In Lighthouses Of Martha’s Vineyard, I briefly talked about the history of the Gay Head Lighthouse, and in a separate piece, I wrote about Aquinnah Cultural Center. I even listed Moshup Beach among my favourite Beaches of Martha’s Vineyard. But let’s just say that you’re heading out to Aquinnah for the afternoon? What will your plan be? Well, I’ve done it many times with several different people. There are definitely a few things that you will want to see and do. It might just go like this…

Start Your Day In Aquinnah

I love going out to Aquinnah. It hasn’t changed a whole lot over the decades, and it’s a very small place, but I never tire of going. First of all, the drive out is always beautiful. More than likely you are heading out from Edgartown or Oak Bluffs, maybe Vineyard Haven, so you will have to cross the entire island to get there. It doesn’t matter where I am, I love going for a car ride—I always have. In fact, when I was a baby, if my parents couldn’t get me to stop crying, they would take me for a drive around the block. I’d be out like a light. It got to the point where, we wouldn’t have to go anywhere, just sit in the driveway with the engine running and Id be out! But I digress. After a hearty breakfast at The Black dog Tavern, or The Art Cliff Diner, I love heading out to Aquinnah either on my own or with a couple of friends. Going early is always better. 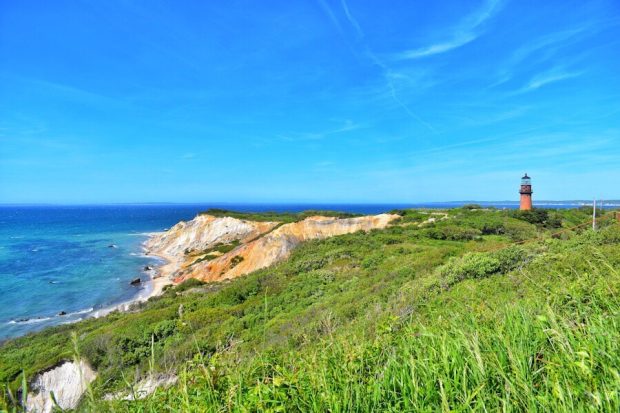 The Aquinnah Cliffs are a big tourist draw which is why it is always better to go early. Tourists tend to go everywhere later in the day. Beating the crowds is a very important part of getting the most out of Aquinnah, because parking is limited, the shops are beautiful but small, and the lighthouse—if it’s open—will only hold a small number of people. The restaurant is quite roomy and will probably always have a table ready, but for me, I like to get the most out of eating at Aquinnah Shop Restaurant—I have a certain table, okay? But I’m getting ahead of myself. 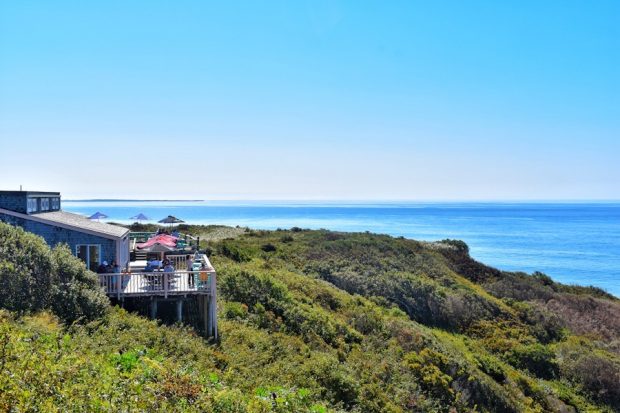 Once you’ve parked your car or stepped off the bus, check the lighthouse. If the lighthouse is open and there aren’t a lot of people there, go check it out. I love the lighthouse. The Gay Head Lighthouse has a terrific history starting with Ebenezer Skiff (no really) first lighting the light on November 18th, 1799 leading right up to the lighthouse’s dramatic move 129 feet back from the cliff’s edge in the spring of 2015. Climbing up inside the lighthouse is exciting. At least, I think it is. Lighthouses are fascinating to me. Not only are they are a glimpse into a world of centuries past, but they are part of a present day world that I just don’t see in Toronto. There is a romanticism in the world where land meets sea. A world of breathtaking sunrises, swimmable beaches, incredible sunsets, and dangerous storms. A world where lovers wait high atop cliffs for their significant others to return aboard boats guided by lighthouses. 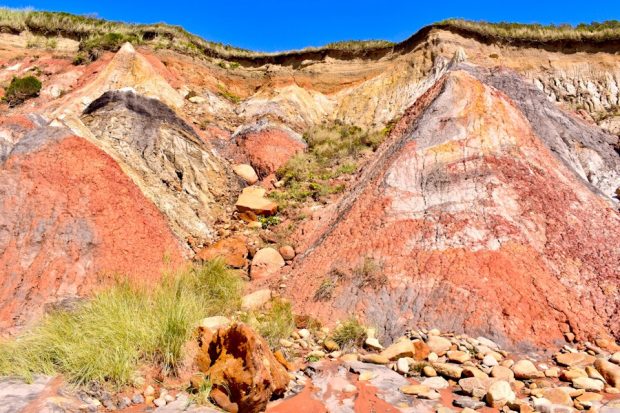 The Aquinnah cLiffs are known primarily for their red clay. Wampanoag legend says that Moshup The Giant would go fishing at the base of the cliffs. With his hands, he would grab a whale and throw it up on the cliffs for his supper and throw a second one on the cliffs to feed the Wampanoag people. The blood of the whale would wash down the cliffs and dye them red. The other theory is that the cliffs are a look into the same period that formed the brightly coloured plains of the badlands and the southwest—the Mesozoic period. Whichever explanation you go with, there is no question that walking the beach, cut-off from the rest of the world by these one hundred foot walls of multicoloured clay and sand, you feel like you are in another world. There is a cut-off from the stress and strains of the day. 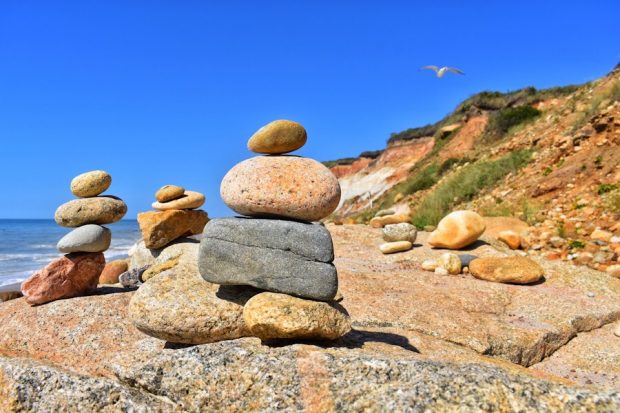 As you round the cliffs, you will start to see that people have taken the time to build stone towers. Incredible balancing acts of rocks found along the beach. If you’re spending the time on the beach, these are a fun way to leave your mark. They’re also the mark of the entrance to the clothing optional beach. I recommend doing it at least once. Hey—It’s The Vineyard! So, just remember, if you start seeing rocks pointing up, soon everything else you see will be pointing down. Just saying… 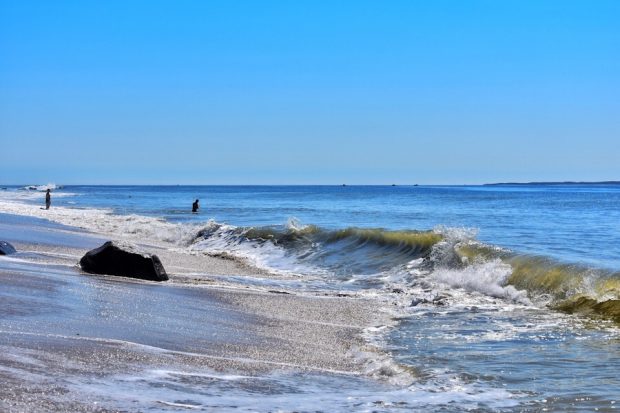 The Aquinnah Shops Restaurant is the perfect spot for lunch, quite possibly my favourite lunch spot on the Vineyard. I have never eaten lunch anywhere with a better patio. Of course, I usually get the lobster roll—hey, it’s my thing—but I have also had the fried clam sandwich, and the lobster cheeseburger! All of which were fantastic. Besides the view, I am also a big fan of lunch because of the restaurant’s sun tea and the homemade potato chips! I’m a sucker for homemade potato chips! I also love that the lobster roll is on a toasted bun and comes with dill pickles on the side. The pickles provide a nice tang! 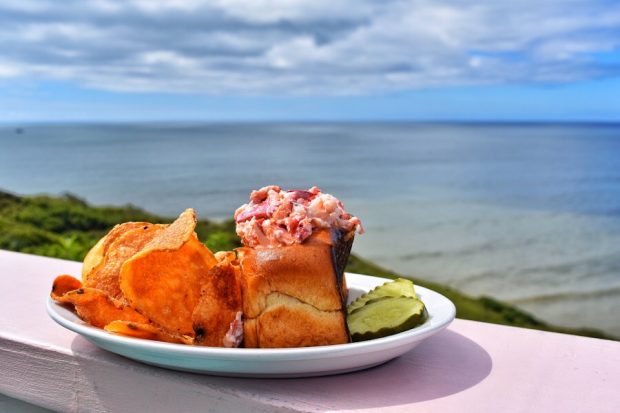 There are great shops around the restaurant. It’s almost like a market place. The shops are mostly open front which makes it very easy to mill about, going from one shop to the next. They are largely local artisans—clothing, art, jewellery, sculpture—displaying their wares. The community feel of the island is magnified in Aquinnah. The shops embody a feeling that is singular to Martha’s Vineyard yet distilled down into a walk of a few short feet. These shops, this restaurant, the history of the light, represent a community of just over three hundred people. People who rely on each other on a day-to-day basis. That level of energy is something that gets lost in a city of millions no matter how inclusive it is. It’s difficult to explain, but maybe it’s true what they say—sometimes, you want to go where everybody knows your name.