I first discovered Mytoi Gardens completely by accident. A group of friends and I had set out to take the Cape Poge tour offered  by the Trustees. None of us had ever been out that way and it was very important that we do so. You see, Cape Poge is where they filmed the closing scene in JAWS. When Roy Scheider and Richard Dreyfuss swim back to land on the two barrels, they climb up onto the beach at Cape Poge, Chappaquiddick. Getting out there is a commitment. It’s far. There are rules and guidelines to driving on the beach, watching for Piping Plovers, etc… We figured, the best thing to do was to let the Trustees take us out. It still stands as one of the best things that I’ve ever done on Martha’s Vineyard. I cannot recommend it enough. It will take all afternoon and the pick-up point is Mytoi Gardens. Neither Mytoi nor Cape Poge have found their way into any of my Martha’s Vineyard Mysteries yet, but I know that it’s only a matter of time… 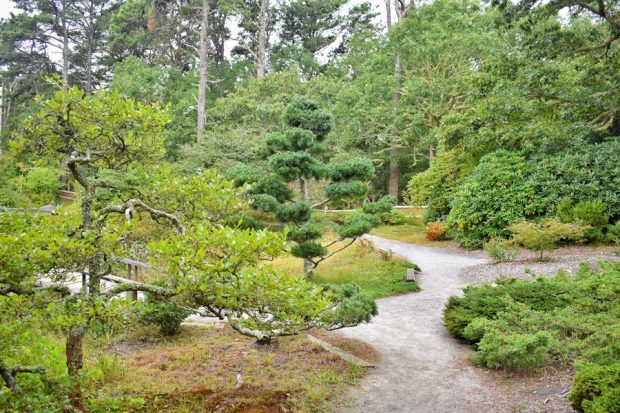 One of The Winding Paths of Mytoi Gardens

Mytoi Gardens shouldn’t exist. At least, that’s how it feels when you are in it. The garden is an enormous greenspace on Chappaquiddick, which is, in itself, a giant greenspace. On the surface, it blends in beautifully. It’s a park after all. As you walk through, you will feel a magic about Mytoi Gardens and it may not dawn on you as to why. 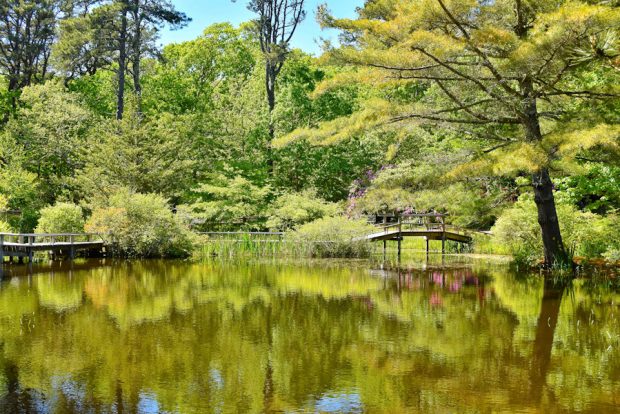 There’s something calming about a pond

Mytoi was left to the Martha’s Vineyard Trustees of Reservations in 1975 by Mrs Mary Wakeman. I have heard that the name is not a Japanese name at all but rather Mrs Wakeman’s sense of humour. The garden was in fact “her toy”. I’m not sure if that’s apocryphal or not, but I like the story. It’s the kind of thing that I would do and think I was being clever. 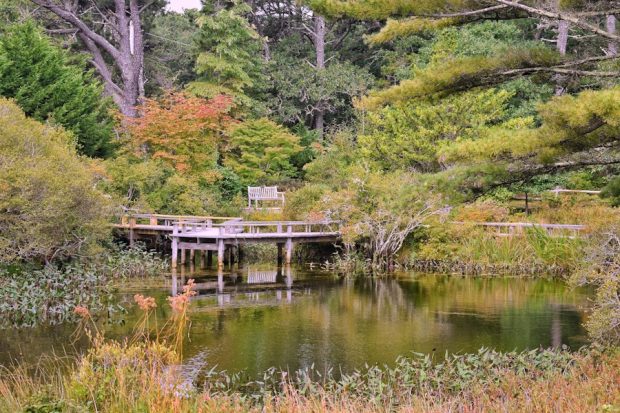 The garden is an effective blend of greeneries. Some having more earthly right to be there than others. I think that’s, at least, part of the magic. There’s nothing ethereal about walking through a garden, we’ve all done it. We’ve all walked through gardens that are contrived and strolled through natural gardens. Mytoi walks the line of natural beauty and unearthly. There among the pitch pine and the birch trees, you will find bright fuchsia camellias. You will walk through groves of bamboo taller than you are. 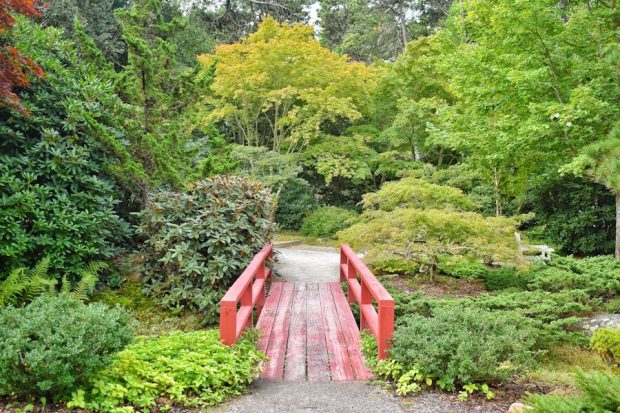 My Favourite Bridge in Mytoi Gardens

Probably my favourite parts of Mytoi Gardens are the parts that are obviously contrived. The red wooden bridge that crosses the salt marshes. The wooden terraces that overlook the pond and the benches set throughout the park designed for contemplation and meditation. Maybe that’s it—human beings have gone out of their way to create something for others to enjoy. Actually, they did it more than once. Hurricane Bob destroyed the garden in 1991. The Trustees completely redesigned it and restored it. When that much positive energy and love is put into creating and nurturing something, it will only be able to give that energy and love back in return. All living things are the same—gardens, animals, and of course, humans. If we are given love, we will inspire it. Don’t miss Mytoi Gardens. There’s a lot of love there.