When you talk about Martha’s Vineyard, it is inevitable, you will talk about lighthouses. Of the fifty-nine working lighthouses in Massachusetts today, five of them are on our island. They play a huge part in The Vineyard’s romantic imagery. A lighthouse is a symbol of a bygone era. For the sailors of yesteryear, they were extremely important. They provided navigation to mariners and their light guided seamen to safety. Each lighthouse is different. The light is a different colour and it flashes at a different interval. It’s beacon is singular so it can be readily recognized in inclement weather. With the history and importance of Edgartown Harbor, you might think that the first lighthouse built was on the harbour, either the Cape Poge or Edgartown Lighthouse. Not quite, The Gay Head Lighthouse was the first of the five to be built. 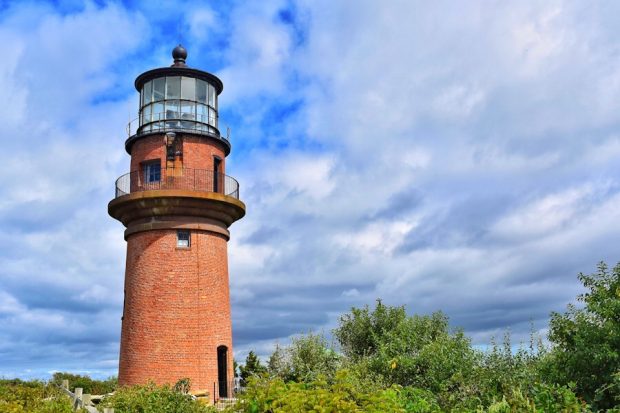 The history of The Gay Head Lighthouse is astonishing and dramatic. It should have a movie. It will get a blog all its own in the very near future. For now, I’m going to going to keep it very simple.first Gay Head Lighthouse was a much more complicated structure than the one that stands today. That’s not a surprise. All lighthouses had to be manned by a lighthouse keeper. The light could never be allowed to go out. Lighthouses were draughty places and their lamps were oil. This meant that the lighthouse keepers and their families lived in a house that was, more often than not, attached to the lighthouse. The Gay Head Lighthouse structure originally consisted of an octagonal wooden lighthouse on a stone base, the keeper’s home, a barn, and a storage building for lamp oil. The first lighthouse keeper, Ebenezer Skiff, lit the lamp on November 18th, 1799. Like all of the lighthouses, the structure went through many changes over the years. The current fifty-one foot, red brick tower was constructed in 1856. When they put in the new lamp, it was automated, and of course, it still is. It flashes every ten seconds. In 1874, ruby-coloured glass was installed to make every fourth flash red. Its current characteristic is white/red at 15 second intervals. 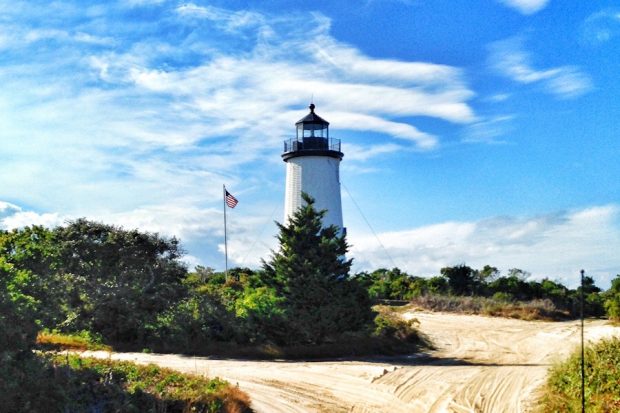 The funding for a lighthouse, and the purchase of four acres of land at the point of Cape Poge Chappaquiddick, was approved by congress in January, 1801. The first lighthouse built was a wooden octagonal tower and the lamp was first lit in December of that same year by the first lighthouse keeper, Matthew Mayhew. With constant erosion taking its toll on the island, by 1825 two of the four purchased acres had been lost to the sea. By 1836, the tower was only forty feet from the ocean. Four more acres were purchased and the tower was moved. The lighthouse keeper’s house was moved further back as well. New plans continued to be drawn up and scrapped as it became more and more obvious that a new light was required. Finally, in 1893, a thirty-five foot wooden tower was constructed forty feet inland from where the last one stood. The lighthouse was officially deemed a ‘temporary structure’, yet it is that very structure that still stands today. It has been moved four times: 50 feet in 1907, 95 feet in 1922, 150 feet in 1960, finally 500 feet in 1987. Its characteristic is white every six seconds. 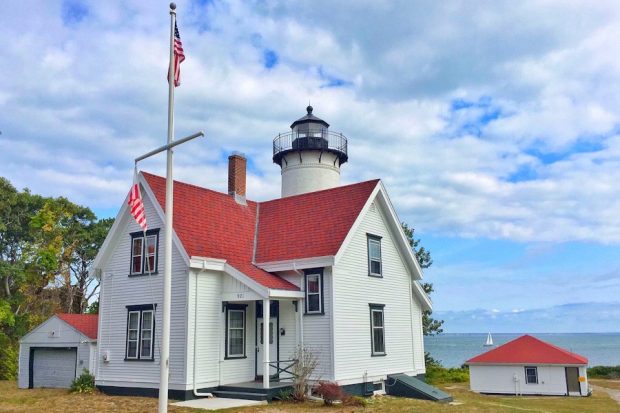 Holmes Hole was the original name for Vineyard Haven and at the turn of the nineteenth century, it saw more traffic than Edgartown Harbor. For that reason, the people of Holmes Hole were a little put out when Cape Poge received a lighthouse before they did. This took them to their congressman, John Reed, and congress granted them $5000 for a lighthouse to be built on the West Chop of Holmes Hole, sixty feet above sea level. Again, four acres of land was purchased and a twenty-five-foot, stone tower was constructed along with a stone lighthouse keeper’s home which measured twenty by thirty-four feet. The first lighthouse keeper, Captain James Shaw West, his wife Charlotte, and their nine children moved in to this cramped dwelling and the light was first lit on October 5th, 1817. It wasn’t long before, like the Cape Poge Lighthouse before it, erosion became a problem. A new stone tower and shingled home were built 1,000 feet southeast of the original light. Several lights, and homes, were constructed over the years, including a fog signal. The current forty-five-foot lighthouse was constructed in 1891. The West Chop characteristic is an occulting white light of four second intervals. An occulting light is a rhythmic light in which the duration of light is longer than the duration of darkness. It is, in effect, the opposite of a flashing light.