In 2005, Martha’s Vineyard hosted JAWSfest. It was the thirtieth anniversary of what, I think we can all agree, is the best film ever made. I have heard rumours that some people think that Citizen Kane is the best film ever made, that in fact, JAWS is the Citizen Kane of shark movies. Well, that’s just ridiculous. I’ve watched Citizen Kane and while I thoroughly enjoyed it, there weren’t even any sharks in it. No one, not even Kane himself, took advantage of the myriad of opportunities to deliver the line, “You’re gonna need a bigger sled!” So, I think it’s obvious, that Citizen Kane should be referred to as ‘The JAWS of land-based films.’ 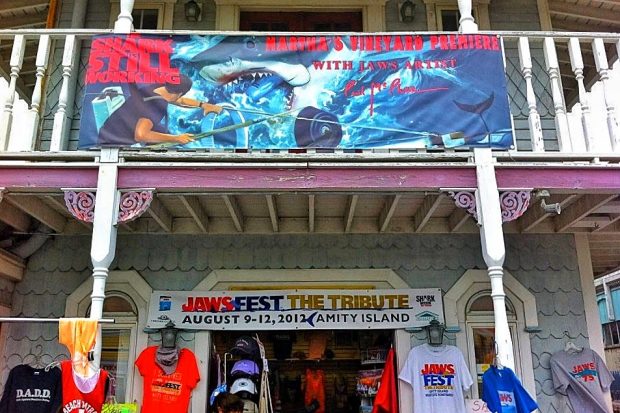 Anyway, with JAWS having its thirtieth anniversary and still being such a big part of the Martha’s Vineyard culture, the island hosted JAWSfest and it went off swimmingly…so I heard. That’s right, I wasn’t there. I remember reading an ad for the up and coming JAWSfest in Rolling Stone magazine and wishing I could go. I remember reading that the cast was going to be there, the production crew, Peter Benchley, essentially everyone but the actual shark. Travel, at the time, was not in my wheelhouse, I just couldn’t wrap my head around it, and I missed my chance. 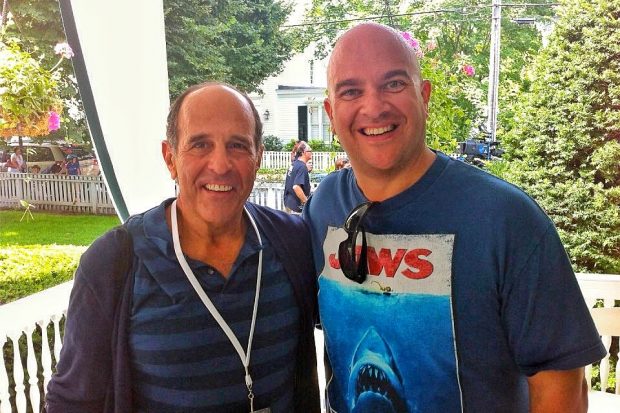 Jeffrey Kramer is one of my favourite actors.

Just when you thought it was safe…

The years came and went, seven of them to be specific, and in 2012, Martha’s Vineyard decided that they were going to have another JAWSfest! I was not going to miss this one. I hadn’t been to Martha’s Vineyard for a very long time and encouraged by my friends and family, I was not going to miss this second JAWSfest! The universe was giving me a second chance. This was sure to be the last JAWSfest, if for no other reason, and not to put too fine a point on it, none of the people involved were getting any younger! Still, there were certainly enough JAWS dignitaries to make the trip worth my while.

I bought my V.I.P. pass as I was ensured that it would swim through doors that were barred to mere landlubbers. My friend, Donna, who lives on the island, but I had never actually met face-to-face, recommended The Edgartown Inn as the least expensive place to stay on-island. I booked. Done. I was on my way! I couldn’t wait to tell all of my on-line JAWS friends that we were finally going to meet in person. There was no way of knowing what a profound affect this trip was going to have on my future. 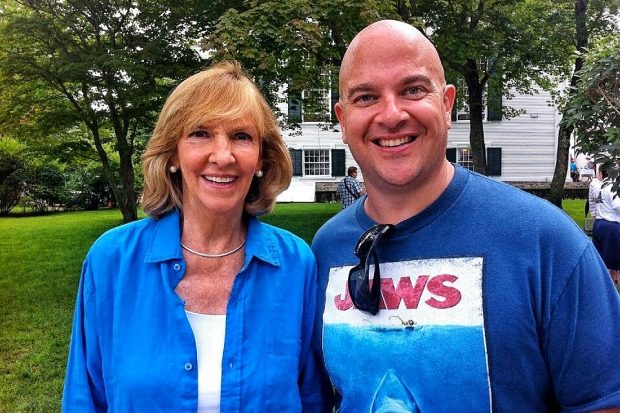 I arrived in Oak Bluffs and I could see banners and signs for the big event all around me. Walking directly to the information centre, I was told by one of the many wonderful senior volunteers which bus I needed to take to get to Edgartown. I got on the bus, sat down and fixed my eyes on the view outside my window. There was no way I was missing a moment of this trip. Taking the VTA is the best way to see the island. It’s clean, comfortable, and very inexpensive. It doesn’t take much to make me feel good. The passing ocean view—when you’re on the bus between Oak Bluffs and Edgartown, always sit on the driver’s side if you’re heading to Edgartown and the passenger side if you’re heading to Oak Bluffs—was more than enough for me.

Ten minutes down the road, my heart started to pound in my chest—I was coming up on the JAWS Bridge. I was practically on top of it before I realized it. I could hear the music! The artist woman on the rocks was yelling in my ear, “The shark! It’s going into the pond! Into the estuary!” Ellen Brody was telling her husband, “Michael’s in the pond…” The chief was running along the rocks—the rocks I could see right out my very window! JAWSfest hadn’t even started and I was there. 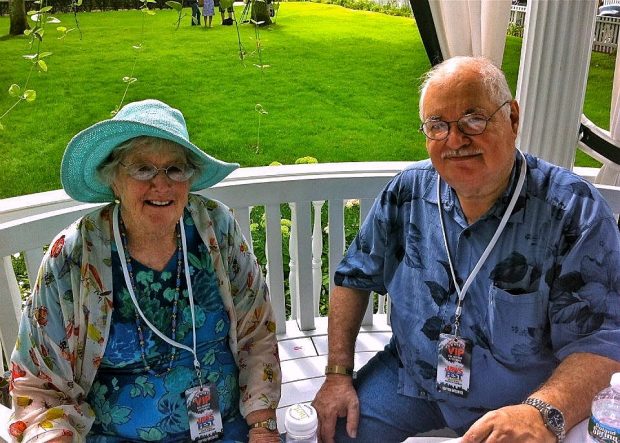 After stowing my things at The Edgartown Inn, I went for a walk. The plan was to meet up with all of my JAWS friends from the now defunct website ‘JAWSmovie.com’ (we’ve since moved to Facebook, hasn’t everyone?) at Seasons on Circuit Avenue in Oak Bluffs. Seasons was a cool spot a popular bar and restaurant held in high regard among JAWS fans as it was the bar where Robert Shaw would spend most of his quality drinking time. As I walked down the steps of the inn, I decided to make my way down a small street that was directly in front of me. In the distance, I could see that it lead in the direction of the harbour and I will always choose the road that leads me to water, no matter where I am.

I ended up at The Chappy Ferry aka The Amity On Time! I was thrilled. Yes, like crossing the JAWS Bridge, Amity was all around me. JAWS was all around me (I have written a whole separate post on this site about how Amity Island is alive and well called Welcome to Amity Island!) I walked further down the harbour and grabbed a slice of pizza. Then, I headed back to Oak Bluffs to Seasons. Time to meet my friends. 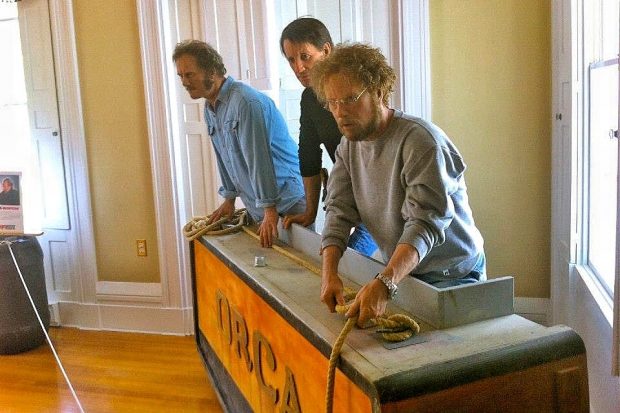 I walked into Seasons and before my eyes had time to adjust to the dim light, someone shouted my name and raced toward me. I think it was my friend JT. To be honest, I am not really sure. There was such a big and wonderful group of us there! Chandra, Claire, JT, John K, John C, Becki, Jacob, Jef, Jim, Dianna, Lou, Dave—I’m sure that I’m forgetting people. It’s a wonderful but slightly bewildering feeling when you meet a bunch of people, for the first time, with whom you’ve become quite close over a years and years on the internet! It’s like being in an episode of your favourite TV show. A lot of great things happened at JAWSfest, but that first night at Seasons was my favourite part. 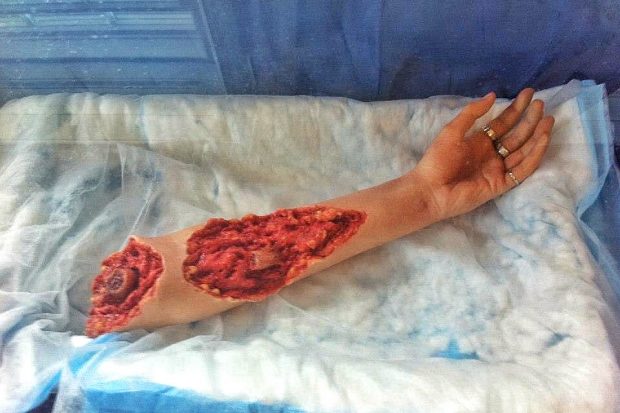 One of the more disarming props.

The rest of the trip was as you would expect. My VIP pass got me into meet and greet with stars and production staff at Edgartown’s Daniel Fisher House. I was thrilled to meet Susan Backlinie (Chrissie, the first victim), Carl Gottlieb (Meadows the newspaper guy, and also the writer of the screenplay), Lee Fierro (Mrs Kintner), and many more. Probably my favourite meet was Jeffrey Kramer! Jeff played Lenny, the other policeman, in JAWS and JAWS 2. He also played the dentist in Halloween II, and an ambulance driver in M*A*S*H! I am a huge fan of all of three, so getting to talk to Jeff was a real treat. He was a really nice guy and seemed genuinely happy to be there. It was an honour to meet one of my childhood heroes, Rodney Fox. I remember reading about Rodney’s brutal shark attack and how he had turned to a life of shark advocacy. That was a big moment for me. 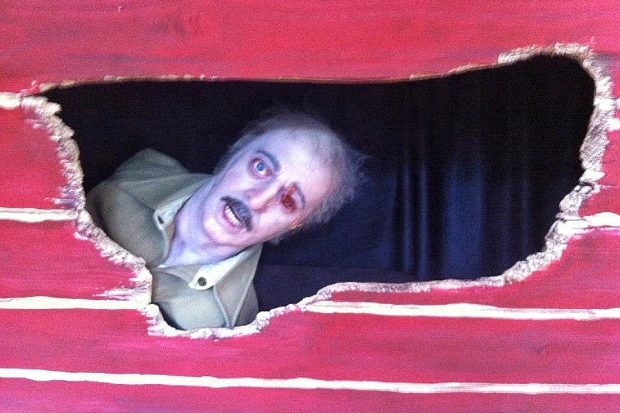 There were some great special effects displays as well. Greg Nicotero, of ‘The Walking Dead’ fame, is a huge JAWS fan and he had worked on some wonderful displays for the festival including a full-sized rendering of the three stars, Shaw, Scheider, Dreyfuss, and a full-sized bust of Bruce! There were props on display from local collectors. The arm from the autopsy scene, barrels from the boat, Ben Gardner’s head, Quint’s chair and harpoon, pieces of the Orca, and sculptures by local artists.

I spent a lot of my time soaking in Edgartown alone. This trip was a rite of passage for me. I could feel something happening, something changing. The island was getting under my skin. I hadn’t been here since I was young and it was getting ahold of me. I skipped a lot of events at JAWSfest and briefly thought that I had missed out, that I hadn’t gotten as much out of the whole weekend as I could have, as much as my friends had, but I was wrong.

When I got home, I pulled out my laptop and I started to write The JAWSfest Murders, my first novel. I wrote it as much as a diary as anything else. I didn’t want to forget any of the experience. Committing it to print, seemed the most logical way to do that. Four novels under my belt and the fifth one underway, I have never looked back. JAWSfest sank its teeth deeper into me than anyone else and it still hasn’t let go.