Long before English explorer, Bartholomew Gosnold named our island after either his mother-in-law or his daughter—they were both Martha, so no one was ever really sure, but my money is on the daughter—it was known as Noepe (land amid the streams). Noepe (say: no-EPP-ay) is the name given by the Wampanoag people who are the indigenous tribe of Martha’s Vineyard. In fact all of the native names on the island are Wampanoag: Sengekontacket, Aquinnah, Chappaquiddick, Wasque, and Squibnocket, just to name a few. There are a few museums that will teach you important points in their fascinating history and last September, I discovered another one: Aquinnah Cultural Center in Aquinnah.

The old signage is still inside the centre.

The Aquinnah Cultural Center is a small unassuming house just to your left if you are walking the path from the shops on the cliff down to the beach. As I am usually down that way early in the morning, I haven’t been there when the museum is open, but last September, my friend Dave and I were in Aquinnah in the afternoon. We did our usual photos at the lighthouse, climbed inside the lighthouse, we ate lunch at the Aquinnah Restaurant, and perused the shops. When we were headed down to the beach, the museum was open, and neither of us had been! In keeping with our commitment to trying every new island experience we could, we stepped inside.

As I said before, the museum is exactly that: a small unassuming home. It is still set up inside much as it would have been by the family who would have lived in it many decades ago. I am fascinated by history. Everything from kitchen implements to homemade tools, and bed linens. I am less interested in extraordinary battles than I am in how people lived their everyday lives. What their simple pleasures were as well as how they struggled. 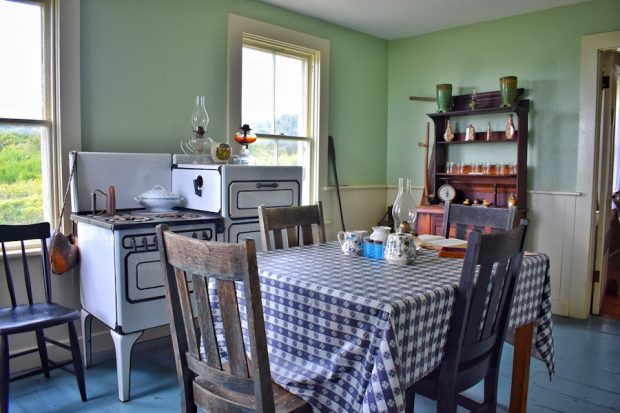 Dave and I stepped inside and were greeted by an extremely polite Wampanoag teenager who was working the centre as his summer job. I was impressed by him right away. He had the kind of manners that stand out but really shouldn’t. There was a nominal fee, we paid it. Actually, I’m not sure who paid it. Dave and I always seem to try and beat the other to the punch when it comes to paying for anything on Martha’s Vineyard and we’re always armed with the same defence, “No, no, no, you paid for the last…” I’m sure it all comes out in the wash, as they say.

After a brief speech on the history of the Wampanoag people, our guide lead us into a parlour filled with books and ornaments from the past. There were paintings and scrimshaw, table settings and home made furniture. Each piece came with a story that was laid out for us by our young (I really wish I could remember his name) guide. He was very well informed and ready with answers to all of our questions. 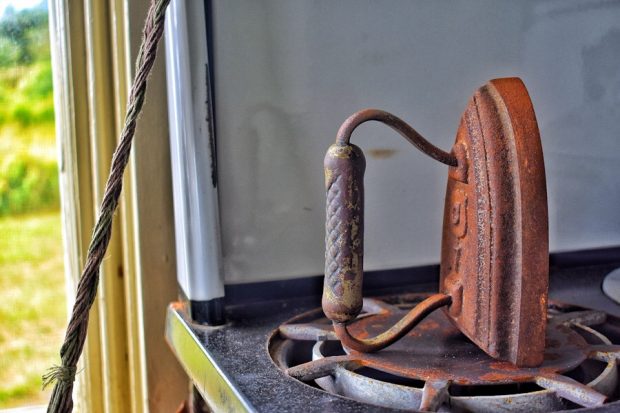 The iron was just one glimpse into the past.

From there we were led into the kitchen. This was my favourite part of the tour. A kitchen is always the heart of the home. That’s where people really lived. There is a lot of happiness to be found in history because happiness is born from gratitude. Take a step back and realize how far we’ve come in a relatively short period of time. We, as a people—especially in North America—have a lot for which we should be grateful. The tools on display around the kitchen spoke of a life that was practical. This was a life built on a foundation of hard work. The iron that was nothing but a solid metal block that had to be heated on a wood stove. The lives of loving wives and mothers that would have used these items fascinate me. The old metal wood stove (I am obsessed with those old, white, kitchen appliances—I think they’re beautiful.) worked along with the fireplace to keep the entire house warm. 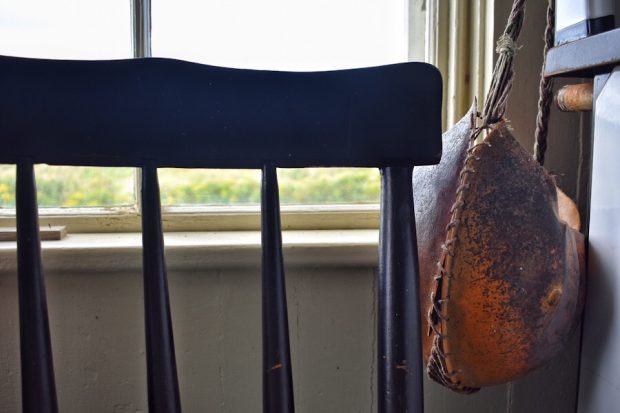 My favourite part of the tour.

My favourite part of the whole tour was a bag hanging on the back of the stove. Our guide asked if I could see how it had been made. I looked closer and to my absolute delight, I realized that it was two hollowed out horseshoe crab shells woven together! How amazing is that? It wasn’t sealed, so it wouldn’t have carried liquid, but for kindling, or picking vegetables, or any number of jobs around the farmhouse, it would have worked just fine. That kind of ingenuity back then always fascinates me. 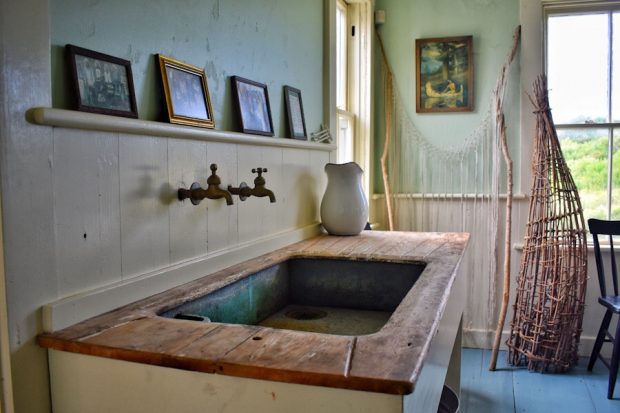 Just some of the secrets from Aquinnah’s past.

The tour wasn’t a long one, but it was informative and fun. I loved spending some time learning about the people who had first populated our island. Even the view outside the window seemed to be a glimpse into the past. The view held no buildings, no man made structures, just fields of grass and shrubs, with rolling waves crashing on distant beaches. It was easy to imagine that I was actually looking out on Noepe and not Martha’s Vineyard.

There is a lot to see in Aquinnah; there are shops, beaches, restaurants, and a terrific little museum. Every tourist goes out there for the Gay Head Lighthouse and the spectacular view if nothing else. When you are in the neighbourhood, and you are heading down to Moshup Beach, why not stop in and find out where the name ‘Moshup’ comes from? In my fourth novel, Pretty Vineyard Girls, my character Trish explains the name to her date Mike. Did she learn it from stopping into the Aquinnah Cultural Center? I wouldn’t be a bit surprised.

Good morning everyone! If you do something kind fo