Last June, I had the good fortune to be the weekend guest of my friends, Dawn and Eric. Dawn and Eric are catboaters of the highest regard. In fact, recently, someone in the catboat community referred to their family as “The First Family of Catboating”. The more I get to know them, the more I can see why, but more about that later. This story begins six weeks later when I returned to the Vineyard to attend the Possible Dreams Auction for Martha’s Vineyard Community Services. I did not expect to see them on this trip, but I had a thank you gift for them. I figured that I could leave the gift with one of their sons to pass along. I had no idea that this short trip would involve more than one cool cat. 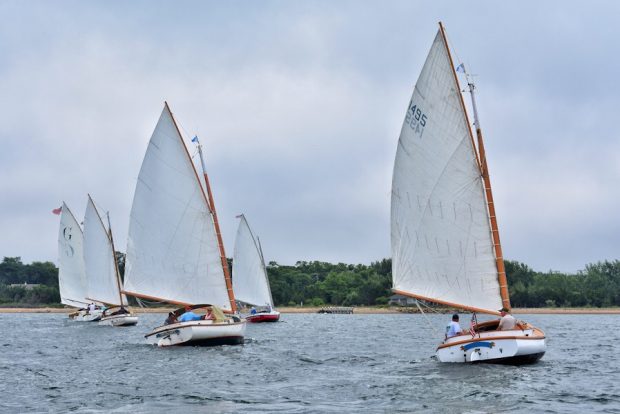 Catboats Coming Around for The Big Race

In a happy coincidence, Dawn and Eric were in Vineyard Haven for the weekend marshalling a catboat race—of course they were—for The Catboat Association. I was staying in Edgartown, but I called Dawn and asked her if I would be able to drop off the gift before they went out. Dawn asked me if I had any plans that afternoon. I did  not, and Dawn insisted that I come out in the committee boat and watch the race. She did not have to ask me twice. I love nothing more than being out on the water. They were going out on Eric’s boat, Mary Gray. Just as Martha’s Vineyard was named for the mother-in-law of the Captain who discovered her, Mary Gray was named after Captain Eric Peterson’s mother-in-law. I had been aboard Mary Gary in June and had a fantastic time. While not a catboat, she is a beautiful vessel, and I could not wait to experience her again. 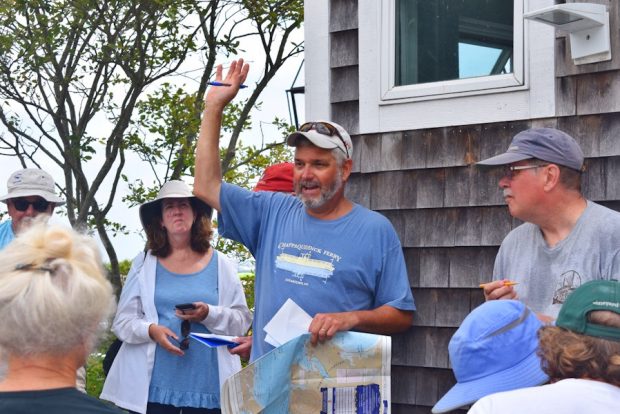 When I got to Owen Park, the participants were grouped by the beach, receiving their instructions and rules from the Catboat Marshall himself. When I was their guest in June, I met a lot of the members of the Catboat Association. They were an incredibly warm and friendly group of people. I was surprised to discover how many race participants I already knew. This same group welcomed me like an old friend, better still, an old catboating friend.  Instructions given and questions answered, we all headed out to our respective vessels. 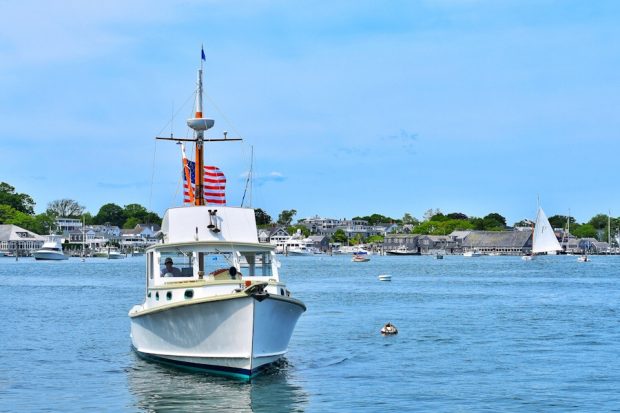 The beautiful Mary Gray with the catboat, Pinkletink, in the distance.

We were the only ones who were not in a catboat. I was the only one who was not old hat at this. In our boat were Eric, Dawn, professional photographer—and longtime catboater—Emily, and myself. The three of them were patient with me and answered my questions. While Eric watched the boats and made notes, Emily adjusted her impressive camera, and Dawn made sandwiches, they explained to me that different boats were racing against each other. Catboats were classed by length, and construction. Wooden catboats raced each other in varying lengths, and fibreglass boats competed against each other by length. The reason for this is that fibreglass boats are significantly faster than wooden boats. This made sense to me when it was explained, but as a landlubber, it did not occur to me. 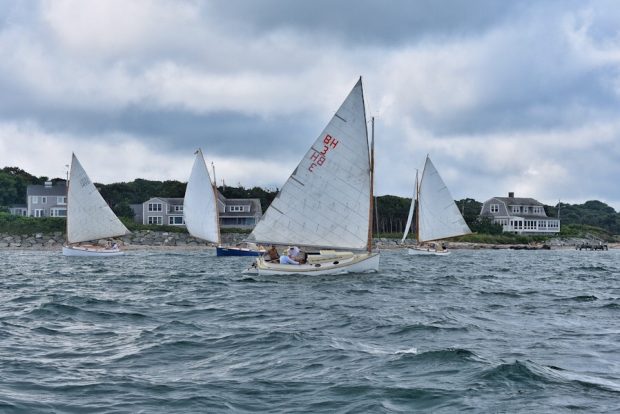 Catboats and The Brody House

Watching the race was pure excitement. As I wrote previously, I love being out on the water! The waves did get a bit choppy. In fact, after the race, there was a huge storm. It held off long enough for the race though; we just got some chop. At one point, while I was getting my bearings, I started to feel a little seasick for the first time in my life. If my hosts caught wind, I would have been completely humiliated. In fact, if, and or when, they read this will be the first time they find out! Ha! Sorry guys! I took deep breaths, I found land and focussed. I relaxed. No problem. Did it help that the land I focussed on was The Brody House from JAWS? Well…maybe. 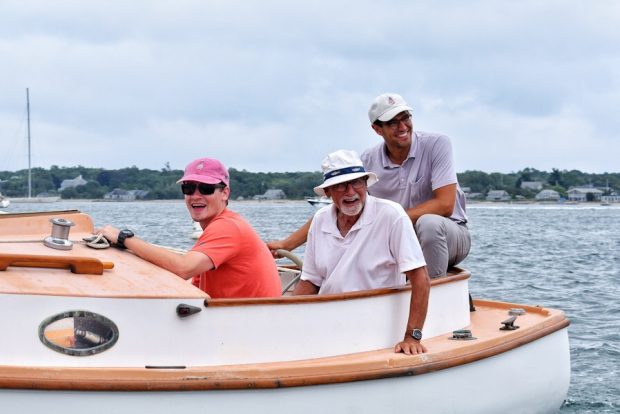 Left to Right: Evan, George, and Ryan aboard Genie

The skippers manoeuvred their vessels with enviable skill. These are people who have been on the water a very long time. Most of them have been sailing their whole lives. They sailed out past the marker at the end of the chop and back. The winning catboat was Genie (Genie is the catboat that I ended up sailing from Cape Cod to Martha’s Vineyard at the end of the summer), manned by my good friend Ryan and his crew—George and Evan.

I couldn’t have been happier and, as you can tell by the photo, neither could they! Ryan also happens to be Dawn and Eric’s son, and George is Eric’s father (I’m not even kidding). Dawn and Eric are also the parents of my best friend, Captain Kurt Peterson of Catboat Charters (first family of catboating, remember?)!  When they sailed across the finish line, Dawn started screaming like my Mum at a Beatles concert. I love seeing people that happy. I love being surrounded by that kind of energy. Pure joy.

Every time I go to Martha’s Vineyard, I make a point of doing something that I have not done before. This came as a total surprise. Very few memories top this one for me. This was a perfect recipe. Just to recap, the ingredients were: the ocean, the Vineyard, catboats, JAWS, good friends…oh, and sandwiches!