Wesleyan Grove is a singular experience. That is to say, by strictest definition, it is singular. Ironically, there are two definitions for the word ‘singular’. They are, “denoting or referring to just one person or thing” and “exceptionally good or great, remarkable”. I think that both definitions apply. Wesleyan Grove is 34 acres of wooden shingle houses in every colour you can imagine, surrounding The Tabernacle—Wesleyan Grove’s physical centre and spiritual hub.

Wesleyan Grove held its first camp meeting in 1835. In the beginning it truly was a campground. It was nothing more than a cluster of tents. The congregation grew over the years and when it became obvious that the same people were returning year after year, the tents were slowly replaced by wooden cottages. At the campground’s peak, there were approximately five hundred cottages. There are just over three hundred today. 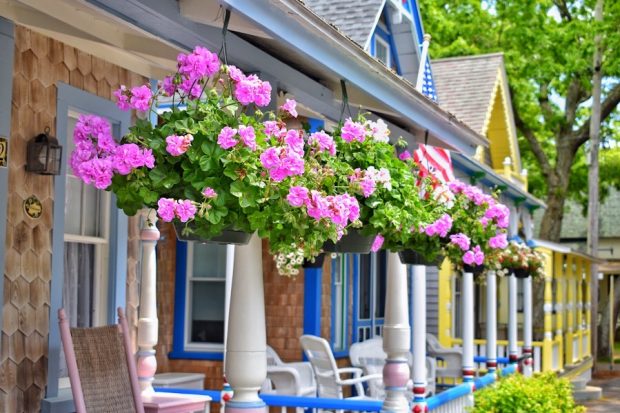 Even if you have never been to Martha’s Vineyard, chances are you’ve seen Wesleyan Grove although, that’s probably not what it was called. In fact, I am not sure I ever heard anyone call it that until I looked it up to read about its history. I have heard it called, “The Campground”, “The Methodist Camp”, and/or “The Gingerbread Cottages”. I tend to go with the latter. Probably because when I came to the island as a boy, we camped, in an actual campground. Also, if the first time you see them is through the eyes of a child, there’s no other way to describe them. After all, they are gingerbread cottages. The only time you ever saw anything like them was when Hansel and Gretel were chewing on the window boxes. 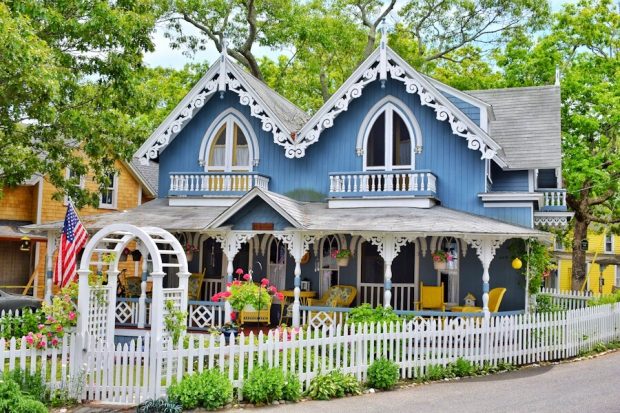 The Blue House is my favourite.

Being surrounded by greenery has a profoundly calming effect on the nervous system. All walks of the medical profession encourage people who work in grey cement and metal cities to get out of their offices and go for a walk at lunch. When at all possible, they say to find not only a sidewalk to walk on, but a green space to sit in. Touch grass, look at trees, listen to wind rustle through leaves. No doubt, that is a major ingredient of the tonic that you feel cleansing your soul in Wesleyan Grove. The trees are tall and full. Greenery is everywhere. There’s a sweetness in the green of nature no matter how contrived. It reminds us of who we are, who we’re supposed to be. A morning walk through the campground is the perfect way to work up an appetite for a lunch at The Lookout Tavern or an afternoon at Nancy’s Restaurant—both just steps away. 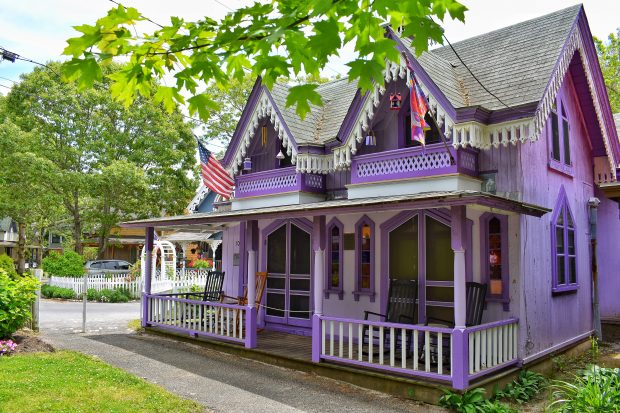 It gets better. It get’s dreamier. The colours of the houses are nestled between shrubs exploding with blooms of all sorts. The most impressive rhododendrons that I’ve ever seen are the ones at play among ‘The Gingerbread Cottages’. ‘The Pink House’ competes with a rhododendron bush of the exact same colour. I’m not sure which came first. I don’t even know how you would plan that? Do you plant the bush and then paint the house to match? Do you paint the house, plant a shrub, and look skyward with a knowing wink? This is a religious campground after all—the first one in all of the USA, as a matter of fact. That must put someone in the know. 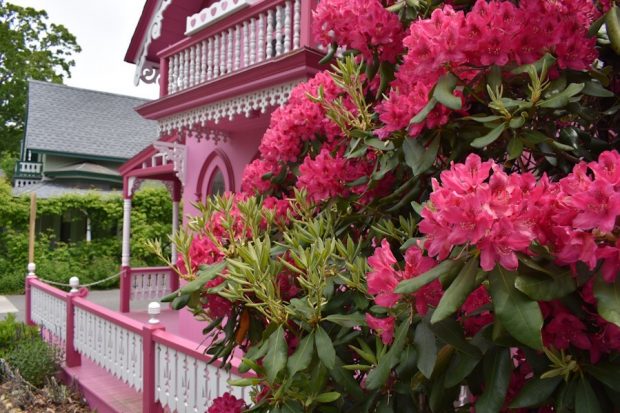 The Pink House with matching rhododendron.

In the third paragraph, I wrote “if the first time you see them is through the eyes of a child”, well, I’m not sure there is any other way to see them. These houses inspire a child-like wonder. I can post all of the photos that I have ever taken of these multi-coloured maisons, but the fact is, until you walk into the tiny village, you won’t get it. Until you’re surrounded by them, until you cannot see anything but pink houses beside purple houses and blue houses, all of them laced with ornate white lattice work, you won’t understand what I mean. Taking a visitor to see it for the first time is almost as joyful an experience for me as it is for them. I watch their eyes widen, their lips part, and their face lift. Sometimes, I see their eyes water. Somewhere, in their heart, they’re five years old and it’s Christmas.