In most respects, Tuesday, September 8th, 2015 started like every other of my Martha’s Vineyard vacations. I was up before the sun, I got washed and dressed quietly so I wouldn’t wake my roommate, Dave. My friends and I were renting a house on Pondview Crescent, just off of Barnes Road. It was far enough in-land to make it a little less expensive, but still close enough to town that if you were a good walker, you could get to town without issue. I loved it. In fact, this house was the inspiration for the house in my third novel, WHITE SHARK. This morning, I was heading north to Oak Bluffs. Every morning was a toss up between Oak Bluffs and a Black Dog Breakfast in Vineyard Haven. Nothing unusual there. What made this morning a little different was that I wasn’t going alone. My friend, Ali was coming with me. This is a story about friendship. 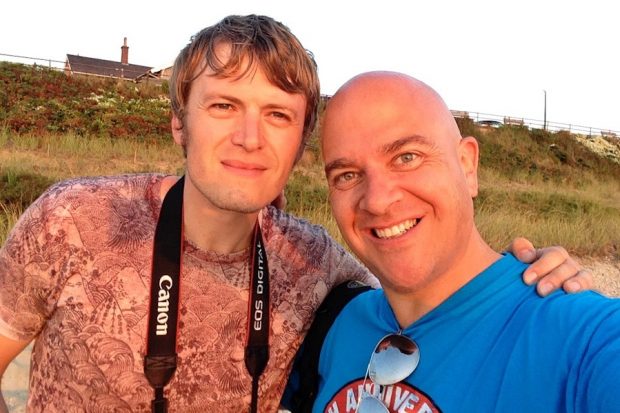 Ali and Me on Inkwell Beach

The night before, while we all sat around the forest green, plastic table on the back porch, Ali had stated in no uncertain terms, that he was coming along with me. He was tired of missing out, he said. Until then, I had headed out early, and then, when my friends stirred and got their bearings, they texted me, found out where I was, and we would meet up. Ali, had decided that he was fed up with missing out on the five hours of photographs and site-seeing that I was getting in before everyone else woke up! At least, that’s what he said. Creeping down the stairs toward the front door, I still didn’t entirely expect him to be there, but sure enough, Ali was up and ready to go! We headed out into the dark morning and began our walk toward Oak Bluffs, coffee, and some photo ops. 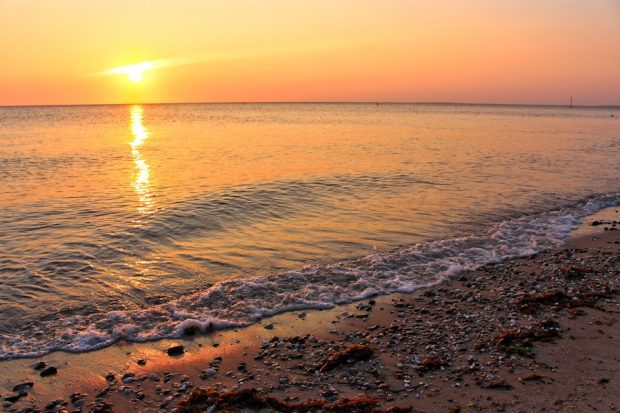 Ali and I  hit Oak Bluffs before the sun, before six a.m. That had been the plan—to be at Inkwell Beach to watch the sunrise. We were, it did, and it did not disappoint. The morning was all orange, yellow, and pink, the way only a Vineyard dawn can be. We got some great shots that morning. When Ali decided that we had taken enough photos and I noticed it was past six o’clock, we headed toward town to Mocha Mott’s for the biggest coffee we could find and a breakfast sandwich—the fuel we were going to need to continue our adventure.

Walking down Seaview Ave from Oak Bluffs to Edgartown is my favourite walk in the world. Especially, in the early morning. Under the yellow morning sun, surrounded by the waves of Nantucket Sound, Ali and I had some great conversations. We talked about the island, JAWS, our friends and family, but we also walked in silence. It was truly hard to believe that he and I had just met a couple of days ago. Ali and his brother Simon had flown over from Wales to share the rental house with myself and my friends, Dave (from Connecticut) and Claire (from England). Dave, Claire, and I had all met at JAWSfest in 2012. The three of us rented the house together in 2014 and to cut down on expenses, Claire had recommended that this year we invite Ali and Simon. They fit in perfectly with our group right from the get go. I haven’t seen them since, but I would still count them amongst my dearest friends. Sometimes, you just get people. 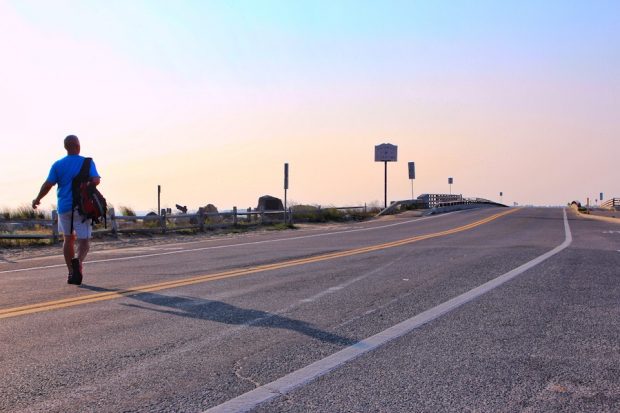 Me at The JAWS Bridge

Ali and I came up to the JAWS Bridge and we did what anyone would do, we took some photos and went for a swim, before continuing on. It was a “True Vineyard Day”, to quote the locals. In wet shorts, we continued toward Edgartown.

Food: The True Basis of Friendship

By the time we got to town, our friends had begun to text us. “Where are you guys? We’re hungry!” As a matter of fact, Ali and I were hungry as well. Sure we had eaten at Mocha Mott’s but that seemed like ages ago. Not to mention, it was only about nine-thirty in the morning and we had already walked ten miles and gone for a swim! Hey, it’s the Vineyard. The gang came down and met us at Dock Street Coffee Shop. I love Dock Street Coffee Shop. It’s a great place for a delicious, inexpensive breakfast, and a true islander feel. The Cafe is all counter seating. In fact, a couple of people had to do “The Dock Street Shuffle” to make room for the five of us. After laughing, eating, and drinking more coffee than necessary, we filed out of the restaurant and bumped into our friend Kathy. She was more than happy to join in. 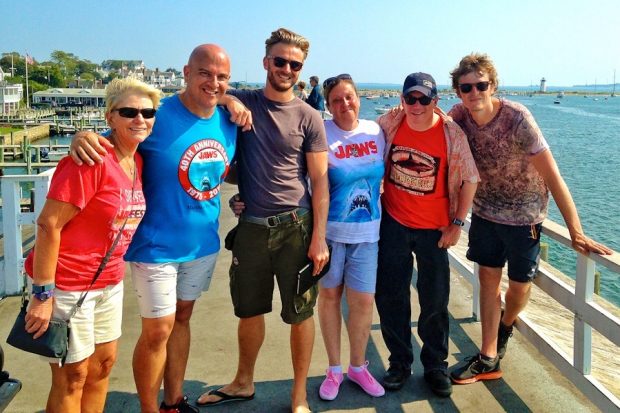 Kathy is always good for a wink and a laugh. She’s a local who loves JAWS as much as we do and is willing to tolerate visiting the JAWS locations. Especially when there is a newbie in tow. Simon, Ali’s brother, had never been to Amity Island before and we were making all the stops! We recorded Simon acting out our favourite scenes at the corner of Main and Water. He shouted, “Have him fill out the form! Just fill it out!” into the backyard of the house that had doubled as the Amity Police Station. I always wondered how often the people who lived in that house were minding their own business, reading the paper, sipping their coffee, when some yahoo yelled through their bushes, “Have him fill out the form! Just fill it out!” Small price to pay for living in the prettiest spot in the world, I suppose.

We climbed Memorial Wharf for a photo op and to watch the Chappy Ferry before we headed up North Water Street to Lighthouse Beach. Halfway toward the lighthouse, I received a phone call and hung back from the group. 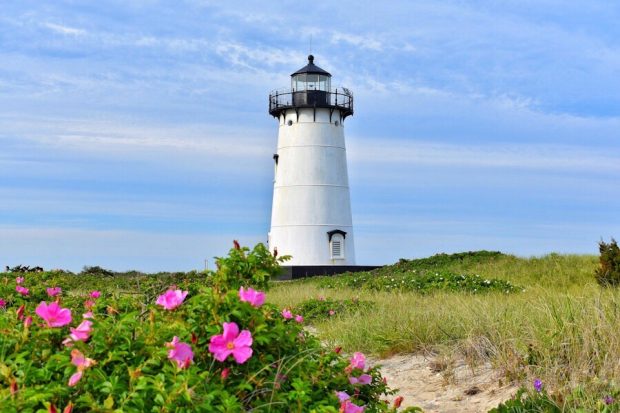 All It Takes Is One Phone Call…

Before my trip, I had started reaching out to some islander friends about gaining access to Lucy Vincent Beach. I had seen it in photos, but during the summer season, Lucy Vincent is one of the private beaches that is only accessible to people who own property or rent property in Chilmark. I had struck out. It didn’t look like it was going to happen. Then a friend of mine called and told me that her boyfriend’s friend was heading up to Quansoo Beach that evening for a bonfire and was willing to take me along for the ride. Doubling over behind an SUV parked on North Water, I slipped out of sight.

I really wanted to go! I looked up the street at my friends laughing and carrying on, making their way toward the lighthouse. The night before, Simon had asked if I thought it was possible to arrange a bonfire on the beach like the beginning of JAWS. I had said that I thought it was only possible on the private beaches, but I really wasn’t sure. Swallowing hard, I told my friend that I really wanted to but I was with five friends. There was no way that I could ditch them for a beach bonfire on a private beach without looking like—or worse, feeling like—the biggest turd on the island. Sadly, I had to pass. I thanked her very much for the offer. She understood and hung-up. I screwed a smile on my face and caught up with my friends. I mean really, it was going to be a great day, right? I was with some of the best people I knew and hey—it was the Vineyard! 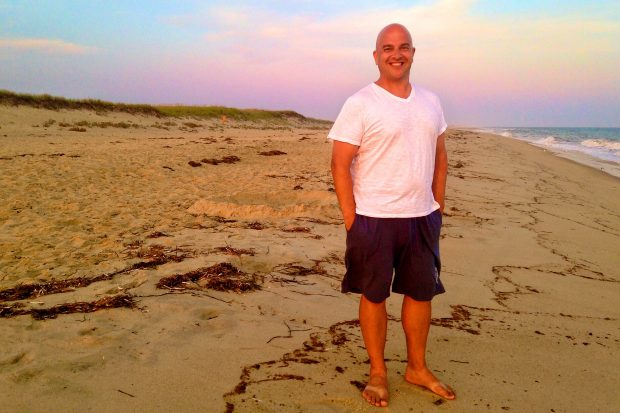 The day kept getting sunnier and warmer. Kathy, Claire, Dave, and I stretched out on the beach and watched Simon and Ali jump around in the water like puppies. In fact, “The Puppies” became their nickname the next day on the other end of the island, but that’s another story…

My phone rang. It was a Martha’s Vineyard number but I didn’t recognize it. “Hello?” I said. “Hey, this is Geoff!” Geoff explained that he was my friend’s friend and he had thought about it and if our car was big enough, we could swing the beach fire that night. We could make it happen. My heart raced! Geoff and I made the arrangements and I hung up. I stared at my phone briefly in disbelief. “Group meeting!” I yelled. I couldn’t wait to share this unbelievable news. 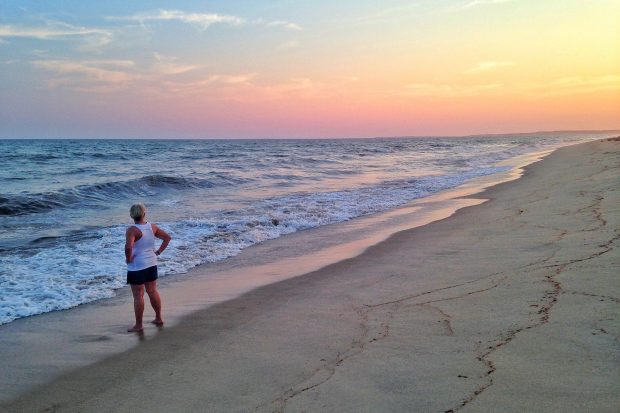 The rest of our evening is almost a blur for me. It’s a memory of feelings mostly. Kind of the way you think of a loved one. It’s the feeling of pure happiness. I remember being so grateful that Geoff and his friend Alex were putting themselves out for total strangers, that I stocked up with two cases of beer and one hundred dollars worth of marinated scallops from Edgartown Meat and Fish Market. My mother always said, “Never go anywhere empty-handed.” I wanted to make a good impression. 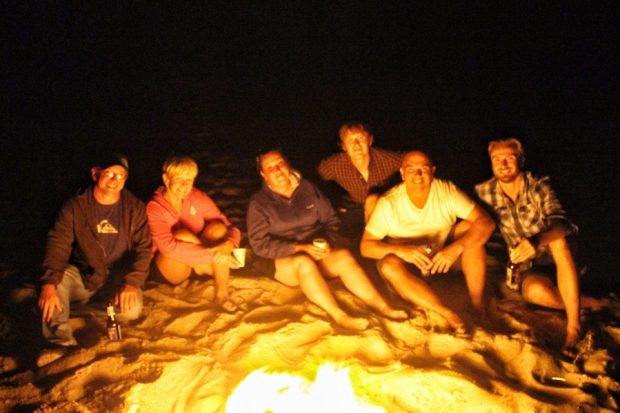 Geoff took the wheel of Dave’s car and we made our way down Quansoo Road. Once we reached the dirt parking lot, I slung one case of beer on each shoulder—I think the bag of scallops was in my teeth—and made my way over the little foot bridge (This little bridge made a huge impact on me and ended up in the climax of my fourth novel, Pretty Vineyard Girls) that led to the dunes. I remember Alex playing Bob Marley on her mp3 player on the beach. We rolled the marinated scallops in tinfoil and roasted them right in the fire. It was one of those moments. One of those moments that you never forget. It’s so important to recognize those moments while you’re in them. Appreciate them while they’re happening. Time and time again, I have had incredible moments on Martha’s Vineyard with wonderful people. I am grateful for each and every one of them. But that’s what happens—hey, it’s The Vineyard!