There are a lot of reasons why people go to Martha’s Vineyard. People love to shop Circuit Avenue in Oak Bluffs and Main Street in Edgartown. There are never any shortage of people looking to spend their afternoon on the upper deck of Nancy’s Restaurant or The Seafood Shanty filling up on Bad Martha’s beer and local seafood. Maybe your thing is a JAWS tour or an African American History Tour with Homegrown Tours—both are excellent. But there is one thing that definitely keeps people coming back weekend after weekend, month after month, and year after year—Martha’s Vineyard has some of the best beaches in the world.

There’s no way around it, when you think Martha’s Vineyard, you think beaches and there are beaches for every taste, every need. Let’s face it, if you are a family with young children, your beach needs are going to be very different from those of a group of young adults, or fishermen. Martha’s Vineyard has got you covered. I don’t have room in one post to go over every single beach on the island. I probably don’t have the room on this website. That doesn’t matter though because I haven’t even been on every beach on the island; however,  like all of the other attractions on the Vineyard, I’m slowly checking them off, one by one.

Each and every beach that I have visited has left its mark on me which is why they always work their way into my Martha’s Vineyard Mysteries. How could I write about our island without mentioning her beaches? In this post, I will go over a few of my favourites. Some are more accessible than others, but I love them all. If they’re here, it’s because I think they’re worth mentioning. Enjoy! 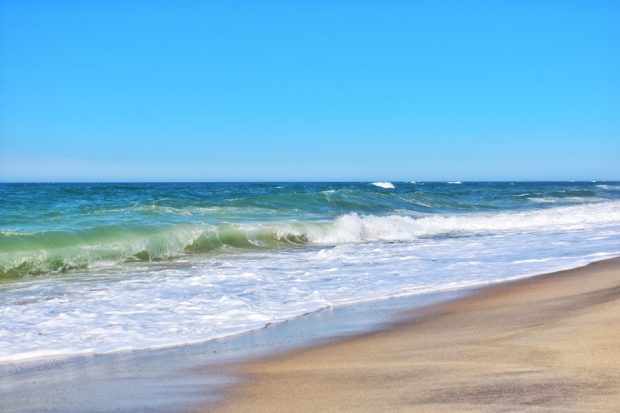 There are few sights that are as impressive as South Beach in Edgartown. South Beach is the eastern end of the island’s south shore. It is hidden behind large grassy dunes and the sand is smooth. It’s a great beach for lying on and soaking up some sun. Because the beach is completely unprotected, it can be rough. This can make it a lot of fun, but it is rarely the beach for a leisurely swim. If you’re not the kind of person who enjoys shaking half of the beach out of your bathing suit or having your bathing suit almost entirely ripped off, this is not the swimming beach for you. There is always signage at the beach entrance—which happens to be the bonfire scene at the beginning of JAWS…just sayin’—that indicates the strength of the undertow and the level of swimmer you should be to even entertain the idea of jumping in. Having said that, South Beach is an amazing place to walk with someone special and watch the sunset. But really, is there a bad beach for that? 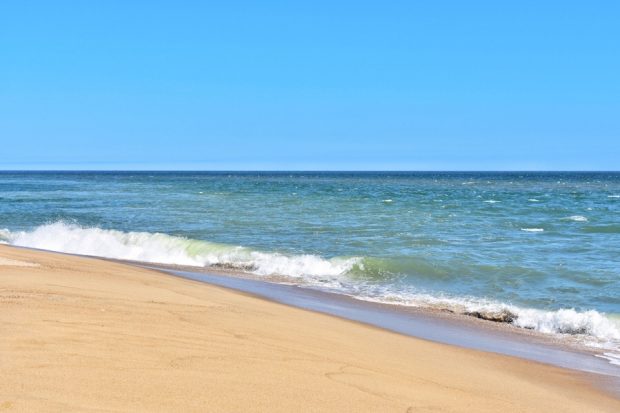 The serenity of East Beach, Chappaquiddick

East Beach on the island of Chappaquiddick is one of the best kept secrets of Martha’s Vineyard. The complete lack of commercial real estate has ensured that Chappy is the road less travelled; however, Chappaquiddick is the home of some of the absolute best and most pristine beaches on Martha’s Vineyard. I would hold East Beach up against any of the private beaches that I have walked and they’re public! Oh yes, there is a fee. The trustees charge a fee and rightfully so. It costs money to maintain these beaches and they do an exemplary job. But I ask you, whether you are with a group of friends or a family with small children, isn’t it worth the price of a really cool ferry ride and a donation to the trustees to have a perfectly swimmable beach almost entirely to yourself? I think so. 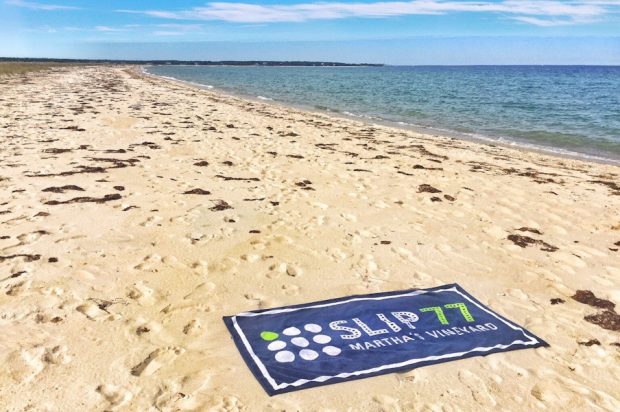 State Beach in Edgartown is perhaps the most famous and therefore the most popular beach on the island. It’s extremely family friendly. It’s sandy, flat, the water is warm and shallow, and it is the location of The JAWS Bridge which must be a god send if you are a parent with teenagers as it will keep them occupied for hours. State Beach is also prime real estate as it is exactly halfway between Edgartown and Oak Bluffs, the island’s two most popular townships. While I do enjoy spreading out my favourite Slip77 towel and chilling on this beach, ironically, I very rarely swim here because I don’t drive. In order to get there I would have to rely on the transit system and although the transit stops right at the beach and goes by regularly, there are other beaches that are more accessible by foot and just as swimmable. Still, if you have a car, it’s a great beach and while this is the beach where Alex Kintner was eaten by that giant shark in 1975, no one has been eaten since. 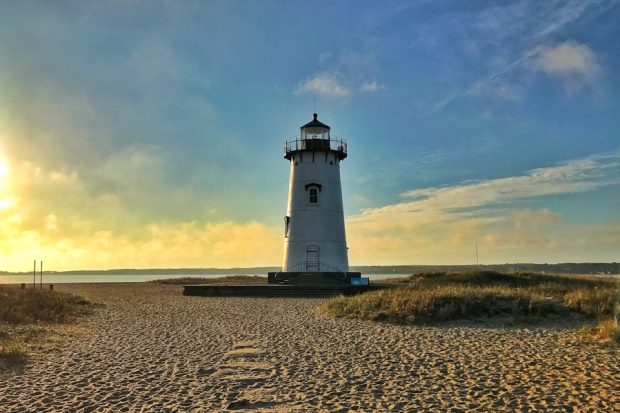 Lighthouse Beach which merges into Fuller Street Beach at its north end, is a beautiful beach and extremely accessible. This is a great beach for an early morning walk as it is nestled right in the heart of Edgartown Village. In every season, I  can be found on this beach in the morning, with a coffee from town, watching the sunrise. This is one of the best places on-island for the sunrise. This is not a great swimming beach, but it has so much going for it. It’s a great beach for watching the boats go by and climbing the lighthouse for pics. In fact, because you are always under the watchful eye of The Edgartown Light, there is a true Vineyard feel to this beach. 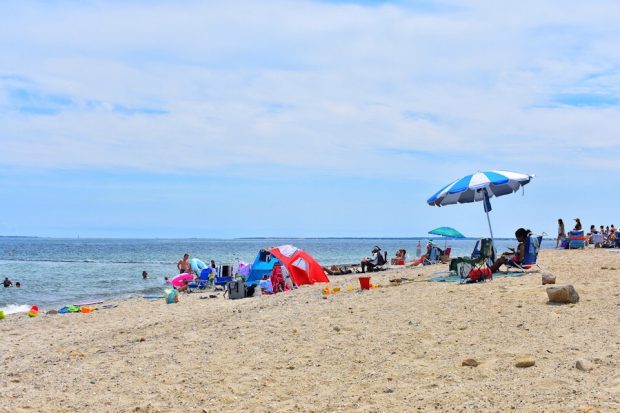 Of all of the beaches on Martha’s Vineyard, I swim at The Inkwell Beach most often. It has all of the qualities that you want in a beach. It’s smooth and sandy, the bottom is is sandy, and the water isn’t rough or deep. That can be said of a great many beaches on Martha’s Vineyard, some of which I’ve already mentioned. The one thing that Inkwell has going for it that a lot of others don’t is amazing accessibility. I love swimming. So, I keep my towel (bathing suit too if I’m not already wearing it) in my omnipresent back-pack. The fact that I can walk over to this perfect beach from downtown Oak Bluffs in five minutes is a dream. It’s usually pretty populated, but it’s The Vineyard—people are happy and friendly. My big city paranoia always asks someone to watch my stuff when I go for a swim and I always make new friends. 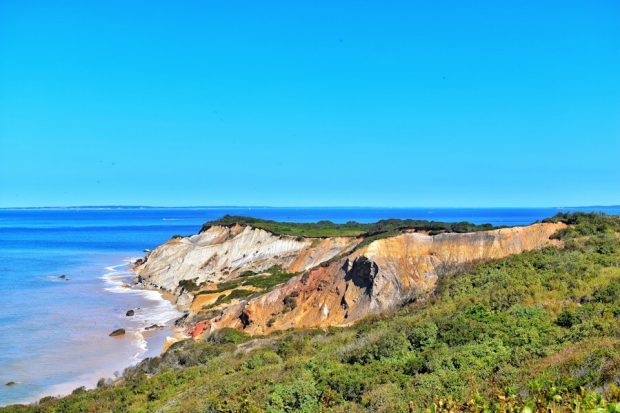 Part of what makes Aquinnah’s Moshup Beach such an incredible experience, is that you need to put a little effort into getting there. You either have to drive or take the bus to the point of Martha’s Vineyard that is farthest away from it’s commercial hub. But like all things that require a little effort, it’s worth it. Once you get to Aquinnah, you have to walk a long path to get to the beach. Then your beach becomes a question of personal preference. You can stay at the beach that is closer to the road or you can walk the beach until you are at the base of the cliffs. The latter is my favourite. It is better swimming and the rise of the red cliffs cutting you off from the rest of the world, truly makes you feel like you are away—untouchable. There is a peacefulness about it. Heads up though, this part of the beach is also clothing optional. Trust me, you’ll only notice for the first five minutes and then, you never know, you just might ditch your kit yourself—hey, it’s The Vineyard. 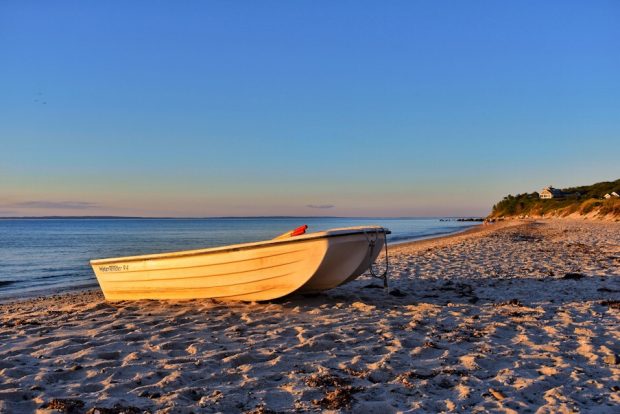 The last beach that I am going to mention in this post is Menemsha Beach. This beach is known for being the place to watch the sunset on the island, but there’s a lot more to it than that. Menemsha Beach is sandy, flat, and relatively shallow. Because it is so far up-island, it isn’t as populated as State Beach of The Inkwell. For all of these reasons, it is a great place to swim with kids. Not to mention, it’s a very short walk to some of the best, if not the best seafood on the island. You’d be hard pressed to find a better place to spend a beach day with the family. Running around on Menemsha Beach eating a lobster roll from Larsen’s Fish Market, and then watching the sun go down—perfect.

Of course there are glaring omissions from my list—Lucy Vincent Beach, and Quansoo Beach, just to name a couple—and I love them both! I had a bonfire on Quansoo Beach that I will never forget. But they are private during the high season and I wanted to point out some beach highlights that everyone could enjoy. I might write a piece on the private beaches later, but for now, this will have to do. Do you have a favourite public beach that isn’t on my list? I’d love to hear about it in the comments below. Have a great day everyone. See you on The Vineyard!